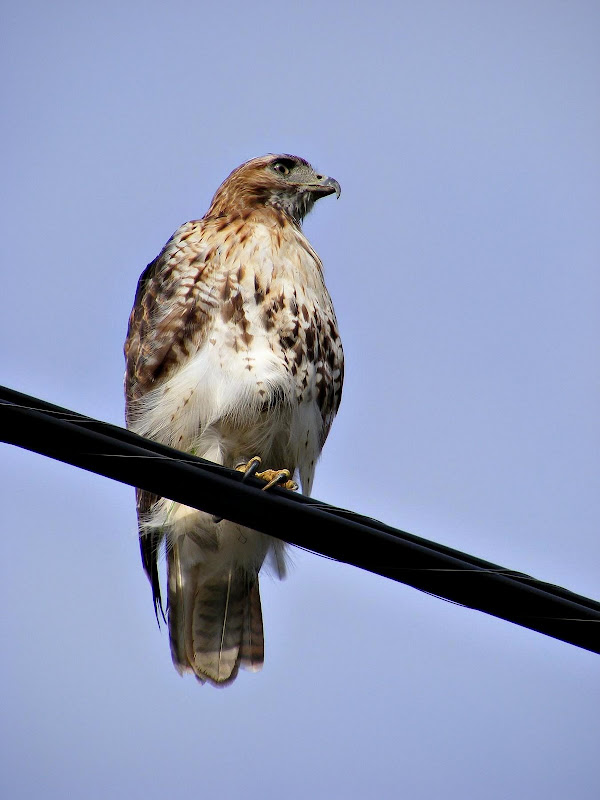 Handsome, isn't he? Though Red Tailed Hawks aren't exactly rare where we live, seeing one perched on the lines over our driveway is. And to see him/her there twice in 3 days is somewhat of a thrill. Judging by the reaction of an American Gold Finch, whom you can't see on the wire above, it's anything but! The whole time the Hawk was sitting there the Gold Finch was chattering away, sending out the alarm to all the other birds, who seemed to know exactly what he was saying. Seems to me he was putting himself in harms way, but maybe it's that old adage about keeping your friends close and your enemies even closer.

Last night as I scanned the pictures I had taken yesterday morning, this one was by far my favorite. My husband came over to look it since it was pretty impressive. As I scrolled in, low and behold, he has a band on his leg! Click on the picture to see him up close and personal! Try as I might there is just no way to read the #'s, but I reported him anyway, along with his picture. If you ever find a bird with a band, please report it. Many volunteers spend hours upon hours banding thousands of birds. Unfortunately very few are ever actually recovered.

As we looked at his very impressive talons we realized he was resting on one foot with the other one tucked up into his chest. Somehow I don't think he was much of a threat. Mostly just taking a rest. He didn't seem to even notice me ... though I doubt that was the case. 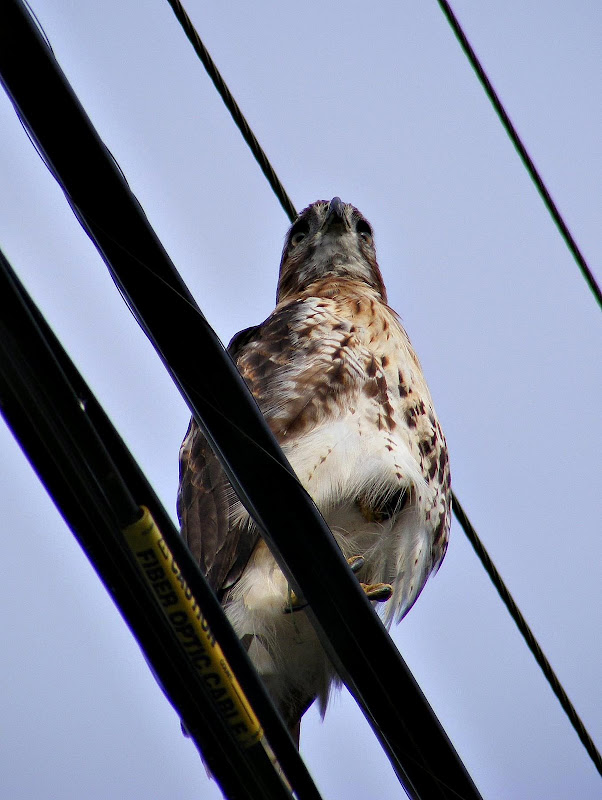 Because of the way the sun was shining on his front side the red of his tail feathers didn't show up. He was a looker all the same ; ) Needless to say, Winston stayed inside for a while. 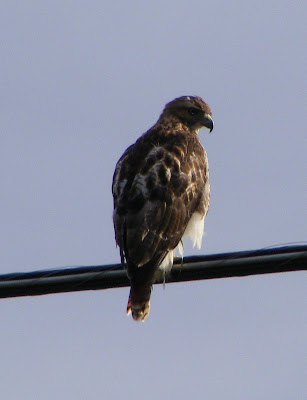 For more information on how a Hawk is banded you may check out this wonderful POST on Birdchick's blog. Being a woman who loves birds I found her blog to be quite interesting as well as something I would love to do!

Gorgeous pictures, Sharon! They are quite majestic looking, I think. Looking for a mousie, I'll bet!

How cool that you noticed the band and reported it, Sharon! Hawks are beautiful, but they are decimating our songbirds in Texas. Mom's farm was once a haven for every bird imaginable but the hawks have driven most of them away now. Mom had to stop feeding the birds. We have an epidemic of Hawks here and I'm not sure why.

I love that you put in the video of the finch giving out the warning. What a brave lil bird!

That's to bad Nancy. I'll bet your mom enjoyed feeding the birds too. We don't have that problem here, luckily. Sometimes we find a bunch of feathers in the yard but in general I think they hunt in the open fields.

He IS a brave bird, isn't he Jenn!

Sharon,
Loved your post! Your pictures were wonderful and caught his majestic essence. It brought back so many memories. Our oldest son was a licensed falconer from the time he was 12 years old the soul care taker of 'Frederick' a Red Tail Hawk with a 6.5 foot wing span... He could be quite intimidating! I am glad you called and reported seeing him. Some one once called when Frederick had broke free from his leather tie and perch in the backyard and we were able to get him back from several miles away. I feel a post coming on soon about the tales of having a hawk as part of our family....hmm. Beth

I would love to read about Frederick! Time for me to stop by your blog and see what's new : )

The Hawk is out here all the time. Just a few minutes ago he had traffic stopped on the main road near out house as people were straining to get a good look at him on the ground. I managed to get a few more pictures and noticed it's the same one with the band on it's leg. There's no way I'll ever be able to get close enough to see the #'s though : (

It's official, my husband is now calling him Frederick and threatening to stand out on the deck with the fireplace glove on his hand in hopes Frederick will land. lol!