It's What I Do

For this Post I thought I'd do something a little different by showing you a little bit of what I do on a daily basis. I work as a professional Interior Painter. Someone else, such as a hired Decorator or the home owner, does the decorating (wish it were me sometimes), which in the house below happens to be the Grandmother. Audrey is well experienced as an Interior Decorator and will do a beautiful job. You should see the window treatments this woman can whip up!

Mind you, these pictures aren't good, and I'm a little embarrassed showing them, but right now the house I'm working in is in total chaos. It used to be a 3 Bedroom Ranch but it was too small so the owners have added on a 2nd floor. Most all the construction is new, even downstairs, and we've been painting while the carpenters are still nailing down woodwork. It's been a rush-rush job to say the least. No one besides us even cleans up after themselves and the home owners don't seem to care. Unfortunately I doubt they will take care of it once it's finished, but that's none of my business. My mom and I are hired to paint so that's what we do!

This is the first room we started on, because it was the only room completed when we first showed up on the job. It's the oldest boys room and it's VERY green. The picture doesn't do the color justice. I would have taken more pictures but you wouldn't want to see all the clutter in the corner behind me from the home owners. We painted the whole room, top to bottom. Ceiling, woodwork, walls, doors, and closet. 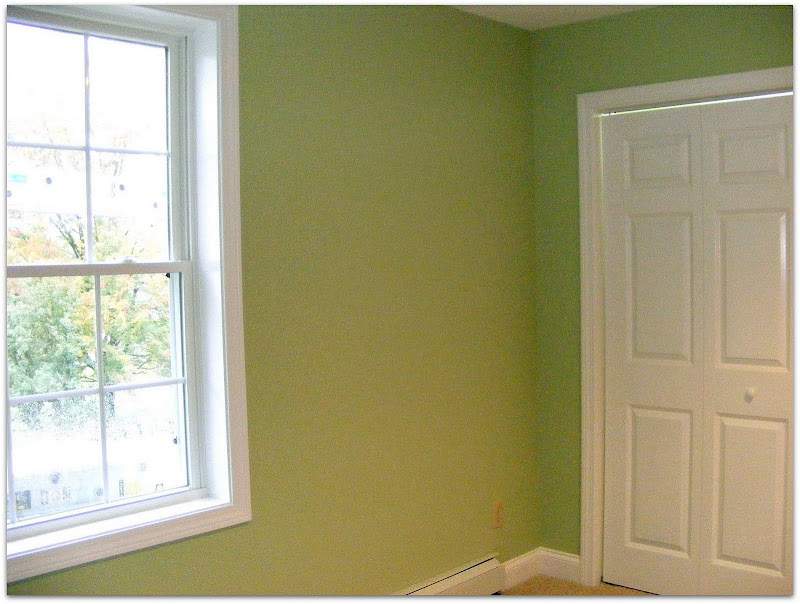 (Color: Sherwin Williams - Baize Green)
*Painters Tip: If you ever paint new, preprimed woodwork, please be sure to prime it first with your own primer. The coating they are installed with has a powdery consistancy and will NOT hold the paint well. If you don't prime you will regret it. Within a few years the paint and caulk will start to chip, peel, and come loose. We've seen it many times!

Here we are in the second room. Another Bedroom for a boy. Originally I started with Sherwin Williams Malted Milk (their son's choice) but it looked way too pink once I had painted two walls. This is quite common with Brown colors. Sometimes they take on a purplish hue as well. So I showed the woman and son a few other colors with Brown tones that would still look Brown on the walls. They chose SW Nomadic Desert. It came out beautiful and their son was very pleased.

NOTE: None of the colors in these pictures look even remotely close to what they look like in person! The light was low and the flash alters the appearance as well. 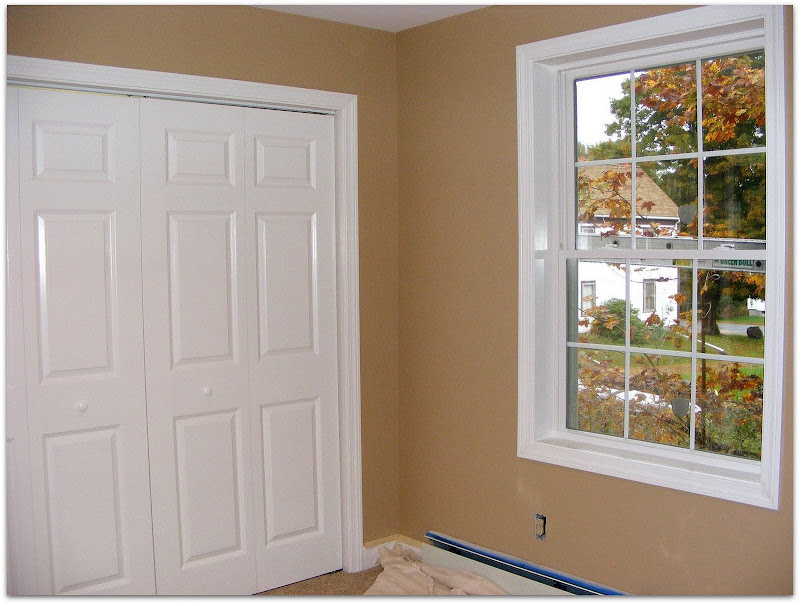 Another view looking out into the Hallway from the same room. As I mentioned early on, these pictures are of rooms in progress. The tape is still on the baseboard and heat registers! Did you notice the door handles haven't even been installed? 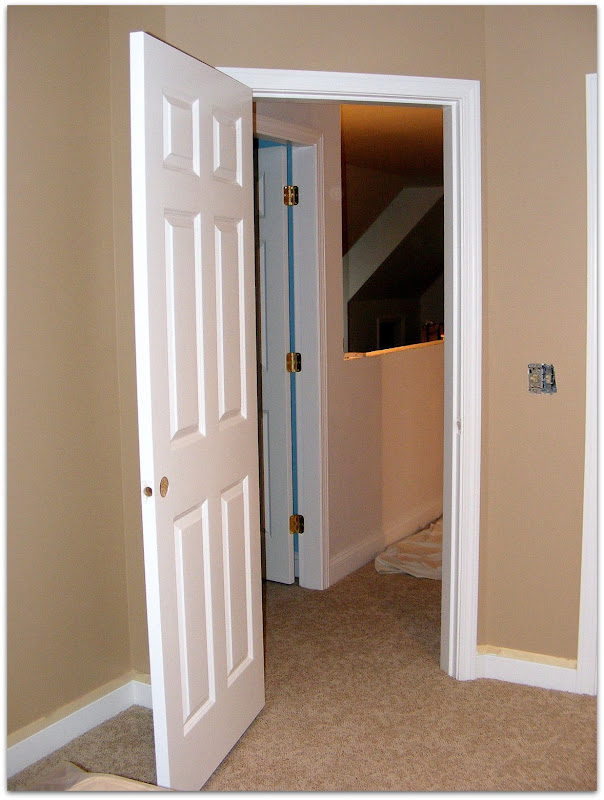 What a cute color! Though personally I think the color is better suited for a girls room, but their 8 year old son picked it out and he loves it. Someday I'll show you my older daughters room because hers is similar in color. 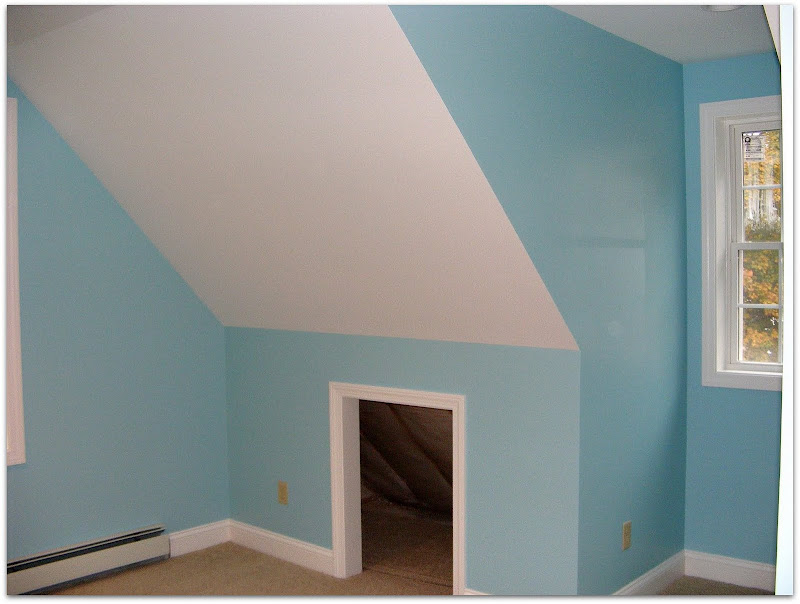 The color in this room is another Sherwin Williams color:Cay

The carpenters have yet to put doors on the Eve storage areas. Nothing like making more work for us after the rooms are all furnished. I'm also quite annoyed by the dark plugs, switchs, and plate covers. If it were me I'd have had them all changed out to white. That's just me. I tend to be picky about that sort of thing. By the way, we do not paint the slanted ceilings with wall paint. Otherwise they tend to close the room in. 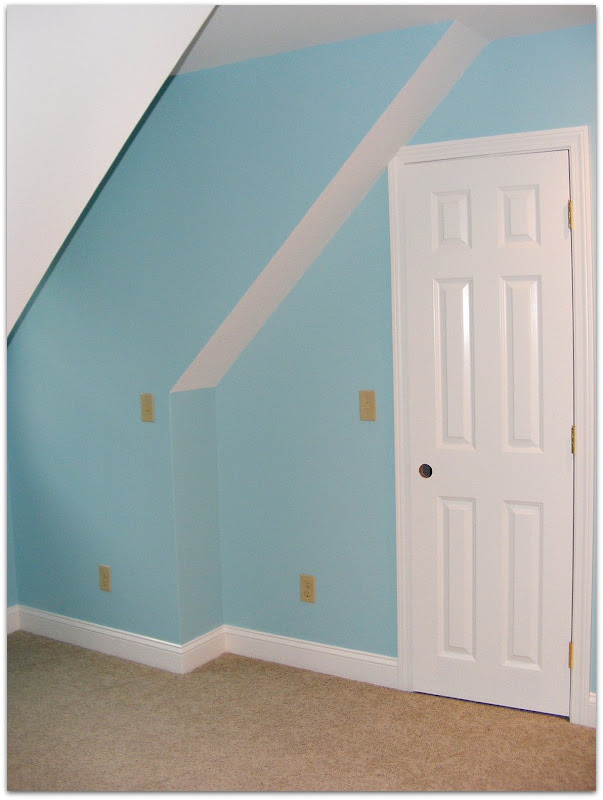 And now, the boys Bathroom.

At the moment it looks pretty bad, but I wanted you to see it that way. Have you ever painted a room Red and had to put 5-6 coats of paint on for it to cover? What you needed to do first was prime the walls with a Grey Primer. It helps the Red pigment to give better coverage. Our primer could have been a bit darker as I'm currently on my 3rd (and final) coat of Red. It will be completed on Monday. 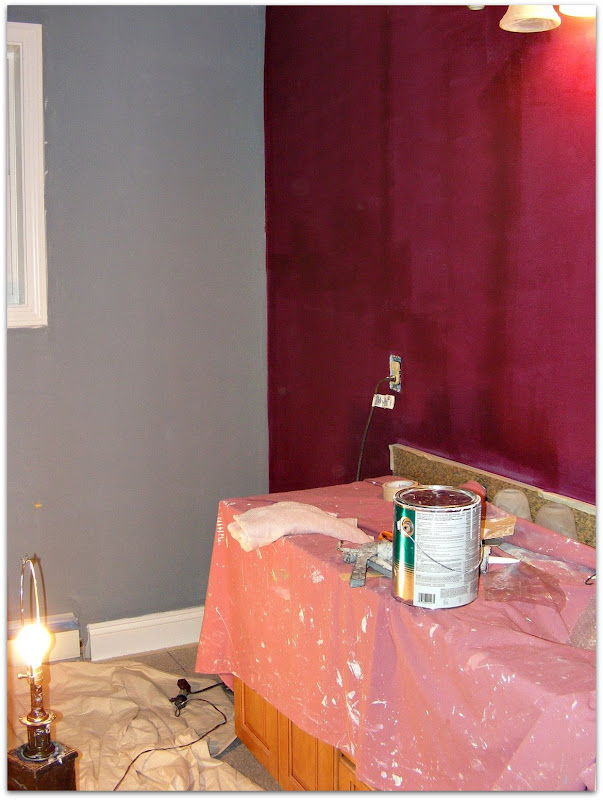 (Color: Sherwin Williams - Burgundy, and it is super dark)

Shown in the picture below is the large Hallway at the top of the stairs looking out from the brown Bedroom. It might not look very big in this picture but it is.

Once it's done I believe it will be a Computer/Playroom area. When it will be done I don't know, because right now we're concentrating on the Bedrooms. The color being used in this area will be a shade lighter than SW Nomadic Desert. It's SW Kilim Beige, the same color I have in my halls at home. The next shade darker than Nomadic Dessert is Latte, the color of the walls in my Family Room. I love Latte! 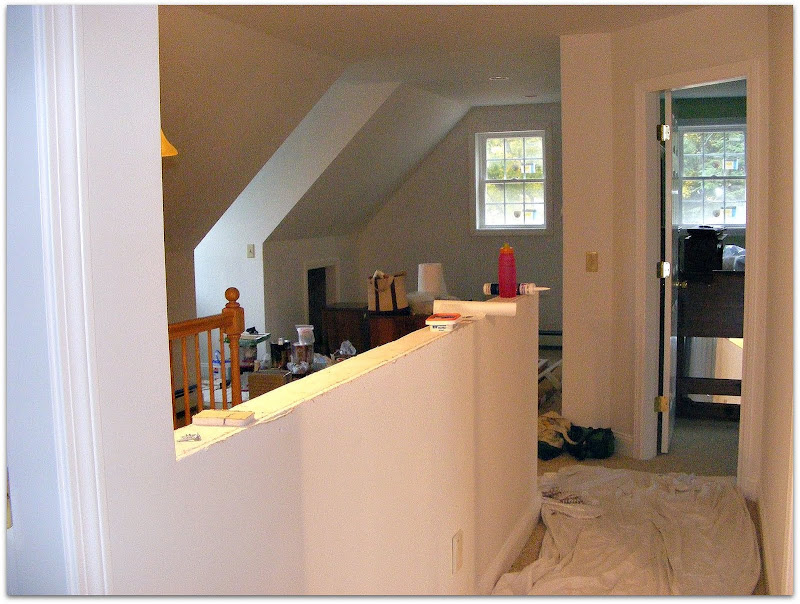 And here is the 4th and final Master Bedroom downstairs, belonging to the parents. They took all 3 original Bedrooms and turned them into 1 large Master Bedroom and a good sized Master Bath. No pictures of the Bathroom yet but I painted it yesterday, and the day before. This coming week we will be painting their room, I believe. 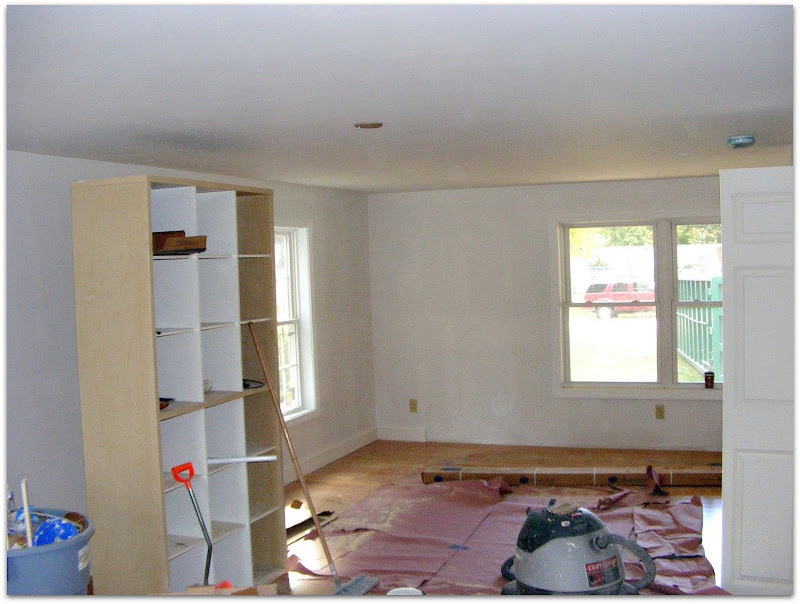 Once this Bedroom is finished we'll move onto the Hallway upstairs, then it's onto the Hall, Kitchen, and Dining area downstairs. I have to start another job in 1 week, and then another job the week after that, so I'm hopeful mom and I can accomplish quite a bit this week, though it won't be nearly enough. She's just going to have to work on her own for a while.

So that's it! That's what I do for a living! In the future I'll try to post some of the rooms I've painted. Aren't you glad you didn't have to paint all that ; )

Email ThisBlogThis!Share to TwitterShare to FacebookShare to Pinterest
Labels: Painting is hard work

I can't imagine how hard it must be working in that much chaos! Your legs must be in great shape...because when I paint a room...the up and down on the ladders make me feel like I've had a MAJOR workout! And I'll never ever try dark burgandy again...we did our library that color and 5 coats later it still looks a bit splotchy! I think it's really cool you get to work with your mom. It looks like the two of you have created a great business together!

Sharon, I'm tired just looking at all those rooms you've painted! I sure could have used your help when I painted Mom's house before selling it. And I agree with Nikkicrumpet - I'm exhausted after painting - all the prep and clean up is worse than the painting. My painter's hat is off to you!

I will say that if I take a couple weeks off and then come back to it, my legs are sore too. But I'm in a rhythm right now so I'm just a painting dynamo!

My mom loves to do prep work so it works out well. Of course she can't do it all herself but she tries! Don't forget, she is 71 years old! The women refuses to slow down!

Nikki don't be afraid of red or burgundy, just be sure to prime with Grey first! Like everyone else, we learned the hard way after painting just one red Dining room ; )

Sharon, Oh, my. We've been in our house for three years and I want a good paint job and a few good window treatments. I'm dragging my feet about getting it done. Do you do work in NC? LOL!

I love the work you did. Your photos are great...I like the browns and Cay is nice and soft.

Your pets are sweet but you might not be surprised that your Pug delights me. There's something about Boston Terriers, Pugs, and smooshy faced dogs that make me melt.

Interior painting makes a house new again. I've painted several of our homes - made lots of mistakes and lived with a Pepto-Bismal pink in a living room for a few years when it should have been a muted shade of rose...lessons learned. (Back in the 80's)

I admire What You Do - it's much better than sitting at a computer all...day...long.

Good job Sharon!! I love painting and use the time to think deep thoughts about things in general. One time I was painting a very small bathroom and using an oilbase paint. The tray of paint fell on top of my head and you can just imagine how many washes it took to get it out of my then long hair. LOL!!

I've painted several rooms in our house with my husband lately and, man, is it hard. You must have some patience! You do such a great job, too.

Mary,
If I lived closer I would love to work for you! Maybe a Southern vacation is in order ; ) Pugs love everyone! My husband hated Pugs until we brought Winston home. Now they are joined at the hip!

Saphotographs,
Thank you for the compliment, Joan! I hate working with oil. And how you EVER got it out of your hair, I don't know. Talk about a disaster!

Alyson,
It comes very easy to me, but I have all the tools I need, and I've been painting for almost 20 years! I need to do some painting in my own house too. It's looking a little neglected these days.

Wow! That is so awesome! I wish you would come over to my house and paint my bedroom that just had a new ceiling put in and fixed walls. I just can't seem to get motivated?????????