It could be any morning

Who's that sneaking around in the distance . . .

Ahh yes, there it is, a Pileated Woodpecker! So often I hear their calls around our house, yet I sit there, drinking my coffee, and just listen. On this particular morning I decided to go outside and take a walk around to see if I could actually spot one with my camera. 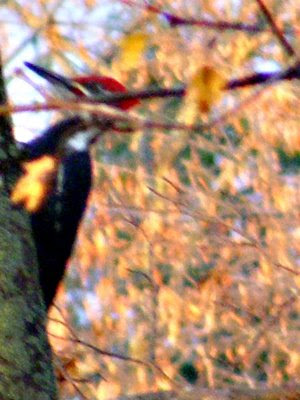 Darned if my camera didn't want to cooperate!

But finally I had some success. . .

Not only was there one, but there were two PW's flying around the yard! Only once have I seen two at the same time. Their call is unmistakable and due to their size they usually aren't too tough to pick out. Getting up close and personal is another thing. For some reason they seemed to be a bit camera shy. Every time I'd sneak up on one it would fly off to another tree. Oh but to see the bird in flight is a beautiful thing. She is just darling. Hanging out in some one's backyard, eating berries off a bush for breakfast. A few minutes later the man who lived there came out to take a few pictures of her also. He had discovered she was there when he went to take his dog for a walk.

Morning time is so peaceful and serene. It's the time of day when all the wildlife are just waking up to start a new day. The perfect time to enjoy nature. Have a nice Sunday : )

These are quite the birds. I so happy that you posted this. They are tough to photograph. Even if you do get close enough, their pecking motion is so fast that it blurs on film. They usually are not out in the open and most of us don't have the lens length or large apertures needed to get the job done. Good job at documenting what you have seen. You got habitat and behaviors. What a great day!

Sharon - We are lucky enough to see the pileated woodpecker every year. Because our backyard is mainly wooded, they show up - only once have I seen two at the same time. And they are so difficult to photograph. They also like to get on the ground and look under the leaves for food. Nice pictures - have a peaceful day!

Sharon, you are a lucky woman! What a great way to start your Sunday. I love the last picture of him, such a beautiful bird.

The deer pictures are so cute!

Has it gotten colder in NH since yesterday? It has gotten downright chilly here and the birds AND squirrels are eating me out of house and home.

You're so lucky to have this around your house. Thanks for sharing!

What a perfect morning walk! Pileated's are one of my favorites! They are showing up on many blogs right now. Perhaps we should re-name this Pileated season? No, that's a bit hard to say!

Lucky you, Sharon! I've never seen a PW here. If woudl take time to venture beyond my backyard, I might see one!

Like you, I believe the early morning hours with nature are the best.

Such beautiful wildlife images!!! Have never seen a woodpecker like this before. What a special place in which you must live.

We lived in Columbia, Maryland for 4 years and had a pair of Pileated Woodpeckers land on the railing of our deck. They are a fabulous bird... generally travel in pairs and according to the zookeeper in Washington DC are quite elusive, so those of us who have seen them feel quite lucky. Thanks for this post.

Oh nice... you have some wonderful images here! I love your wildlife you have photographed, the deer is precious. All of the images are beautiful here on your blog!! Very nice indeed!
~Michele~
Mountain Retreat-Canada

I love the pictures of the woodpecker and deer! We get those around here too, but I've never gotten a picture of the elusive, quick woodpecker. Even more difficult are hummingbirds. Almost impossible!

Sharon,
What a special way to spend Sunday morning. The pileated woodpecker is so pretty. I am glad you were able to capture both of them on film. We do not get them in our neck of the woods, but we do get plenty of deer, moose and mountian lions. I love the early mornings when I am up, out and about. Today was one of those mornings after I took my husband to the airport for another travel week. It was so peaceful to watch the sun come up. I am enjoying this pretty fall weather and especially the colors which we still have in abundance. I will miss it. We are suppose to see a big change in the weather next week for Thanksgiving.
It was a lovely post!

How lucky to get these shots Sharon. I hardly ever see our woodpeckers even though I hear them all the time. They are very shy birds and tend to hide away all the time so I have given up trying to get a photograph of one. :)

Oh, these photos are lovely! Good capture of the Pileated Woodpecker!