Do you hear what I hear? No more Christmas music. Ahhhh ....
But I still have snow pictures left over from before Christmas so I'll share a couple now, a couple later. 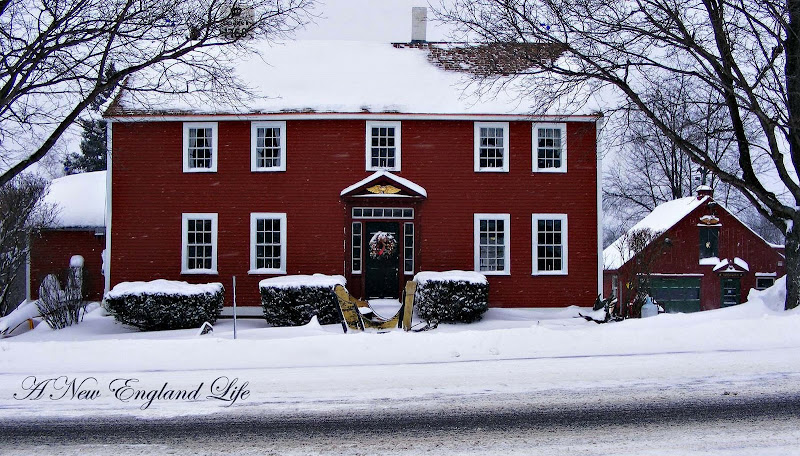 This house is located not far from ours and the owners just finished having it resided. I love the color. Since the roads were really messy everyone was going about 20 miles an hour as we drove by, otherwise I wouldn't have been able to get this picture. You can see the snow is still falling, perfect against the red colonial. Not only is the house old but they also sell antiques. I've never stopped in but they have the cutest little shop! And here's my snow dog loving every minute of the white stuff. She has a great nose and managed to sniff out her ball underneath the snow, dig it up, and then bring it to me but not give it to me. Basically she's a big tease! lol! I love my Lily girl!

And then there's Phineas. He became terribly sick last Monday before Christmas, the same day these two photo's were taken. He had been to the vets in the morning since his UTI wasn't clearing up. Dr. Richards wanted to take an x-ray to see if he had any kidney stones, which he didn't. Everything seemed normal enough when we went home but by the time 6:00 pm rolled around his temperature had shot up 4 degrees and he was a very sick boy.

My husband and I rushed him to our vets just before they closed where he was immediately put on an IV, antibiotics, and pain meds. They also did some bloodwork to try to figure out what was going on. As far as we knew he was just battling a Urinary Tract Infection. The next day the vet said Phineas needed to have an ultrasound because the only thing his bloodwork showed was Anemia. The woman who performed the ultrasound had an answer.

We'd never heard of it and the vet said it's very uncommon and can be deadly. Later on our vet said if we hadn't brought Phin in when we did, he most likely wouldn't have made it through the night. Since there is no specific test for Mycoplasma they basically have to go by symptoms. It's a parasitic virus that destroys the red blood cells causing the anemia. The cat usually also has a high fever as well as a thickening of the bladder wall causing them to continuously strain in the litter box, mimicking a UTI. Phineas had all these symptoms. Since Phin never goes outside and our dogs are treated for fleas and ticks, our vet seems to think Phineas may have been carrying this virus since he was a kitten, but there is no way to tell.

Looking out at the snow

Once Phineas was diagnosed he was immediately started on Doxycycline of which he must take for 3 weeks. After 2 days on an IV he was allowed to come home on Christmas Eve but I stressed terribly all day Christmas since he didn't seem to be getting any better. Around 7:00 pm he finally turned the corner and wanted to eat. That night he slept on our bed and has been getting better each day since. Unfortunately I think he will carry this virus forever so there is a chance it could reoccur. We are just so thankful we didn't lose him!

I hope you had a wonderful low stress Christmas day!

The Good Life in Virginia said...

glad to hear your lovely cat is getting better...i know it is difficult when they are ill. happy holidays from my home to yours.

I'm so glad Phinny is better. What a terrible scare. Your new photos are gorgeous Sharon! I love Lily's happy face in the snow. She is such a tomboy.
xxxooo

Good Life, thank you for stopping by! I'll be sure to see what you're up to also : )

Hi Nancy. Yes, he is back to his wild self! Just think, for all that money I could have bought a REALLY nice camera! LOL!

I am pleased to hear Phineas is on the mend. We become so attached to our pets and hate it when something like this happens to them. BTW I love your header.

Sharon - I think your camera is doing a fantastic job - that sunrise is gorgeous! And I love that red colonial house - it looks so pretty with the snow all around. Glad Phinny is doing better. Give him a hug from me.

First of all, the sunrise this morning was stunningly gorgeous! Thanks for capturing and sharing it with the rest of us! I also agree the house is charming!
My husband is always coming in to get me to see the moon, beautiful sunsets etc. He is very aware of Mother Nature.
I am so glad you got Phin to the Vet in time and he is finally getting better. Hopefully he will never have a recurrance. Sorry about the Vet bills at Christmas though.

We too had a bad and scary Monday. Kate's oldest granddaughter P, age 5 was here playing while we finished wrapping up wedding stuff and saying good bye to our out of state company.
This little one who had been the flower girl and had looked so darn cute walking down the aisle two nights before did not look well and when I held her, her breathe just didn't smell right. She was pale.
We talked her mommy into taking her in to be checked.
Within an hour we got a hysterical call saying she had been diagnosed with severe diabetes!!! She was to get her to Primary's Children's hospital stat to stablize her.
So Kate had her other two grandbabies ages 1 & 3 here from Monday to Christmas. Little P's blood sugar was almost 700 when she was admitted. 120 is good. She is just a bity little thing... It has broken our hearts.
She too was able to come home on Christmas Eve, which had seemed unlikely at first. It is touch and go until her tiny body can stablize. She will be a regular there. She has 4-5 shots of insulin a day which she handles pretty well... it is the finger pricking for testing every two every two hours she cries about;(

The doctor had tears in his eyes when he told her mommy she should thank God she got her to him when she did! So we all felt blessed for that.

Sorry for the book tonight:) It is amazing how these trials come when you least expect them. I am so glad we both still have those we love.

I am so relieved that Phin is on the mend and that you took him in when you did, Sharon. Poor boy, he must have been feeling really lousy.

I love the photo of the red house with the white trim. It's pretty enough to be on a Christmas card! How I wish we had more houses with this kind of character in California!

Well no wonder you have been stressed! We get so attached to our furry children and it's hard to watch while they are ill.

The house! I want to move in and be your neighbor. What a lovely home. And I would love to snoop around in their little shop and see just what they have inside too.

Hugs to Phin.... may he continue to do well each day.

Hi Joan, sometimes my husband thinks the animals are treated better than he is! lol!

Laura, I was rushing to drop Andria off because I was so afraid I would miss the shot. Luckily that didn't happen!

Beth, What a terrible thing for a family to go through. 5 years old ... she's so young! Does Diabetes run in your family? My best to you all. You can write a book anytime ; )

Claire, It is always nice to see you. And maybe sometime you can show me some California scenery with that wonderful camera of yours ; ) Hugs to Abby!

Thank you Jayne! We;re happy he's back to normal too. Wish we were done with the vet bills too.

Hi Di, You know how I feel when it comes to animals. I hope your new 'Handsome' is coming along well and has stopped coughing! The old houses look so beautiful but I can tell you after working in a few, they are cold, drafty, and usually dirty. Not to mention most need lots of maintainance. That said, they make a lovely postcard : )

I am so glad your kitty is feeling better. The poor little thing.

I too am glad Christmas is over with. It was too stressful for me this year.

Warm thoughts for you and your family (including fur babys)

So glad Phineas is on the mend. You're a good cat mom! When it comes to the fur children, the mantra is, hey, it's only money.

Awww, I'm so glad Phineas is feeling better. He's such a beauty!

Your new header is beautiful. Somehow, sunrises like that seem more special to me than sunsets. Maybe because I'm not always up to catch them...

I love the portrait of Lily, too. VERY cute! And, of course, red houses are my favorite. ;)

Wishing you a stress-free new year!

Hi Sharon,
Hopefully we have the right handling in for your friend. I hope she is on her feet again real soon.

Sorry to hear your beautiful cat has been sick. Is there any kind of preventative meds they could put him on to maybe keep him from becoming so sick if it reoccurs? Your sunrise picture is beautiful! Happy New Year!
Glenda

Glad your lovely cat was home for Christmas eve. What a scary thing!

Beautiful picture of that red house in the white snow. Red is my favorite color and it's amazing against the white.

So glad Phineas is better...that is scary!
Beautiful pic of the home with the snow....quintessential New England!
I grew up in NH....been in PA for 23 years now, I do miss the snow. We get a little here and there but not quite like NH! I do like the earlier spring here, though!
You're previous post was great! I don't mind driving in the snow, either...it is sooo pretty! and what a great time to go out shopping!
HAPPY NEW YEAR, HAPPY NEW DREAMS COME TRUE!

Oh, poor Phineas. I'm so glad he's on the mend. You are the second person who had an ailing kittie for Christmas... :0/

We love animals and have more too many to list! I love the photo of Lily in the snow! It's a perfect winter photo!
Have a great new year!