You can best believe that's just what I did this morning in the middle of a snow storm ... Shop! So many women are terrified to drive in the snow, but not me. I'm out there! lol! After having 2 mini-vans in a row, buying an All Wheel Drive vehicle 2 summers ago was one of the best thing I've done for myself in years! I used to have 4-wheel drive but not since my oldest daughter was little. I'm making up for lost time! 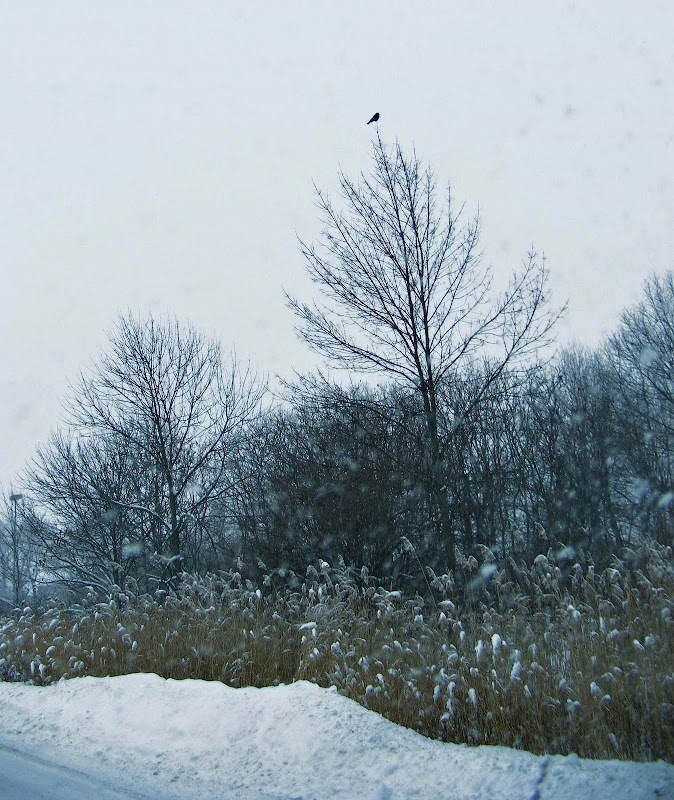 Needless to say there weren't many shoppers out. Mostly men or couples. There were some women, but nothing like there would have been were it a regular Sunday before Christmas. Last night was an absolute zoo at Barnes and Noble! 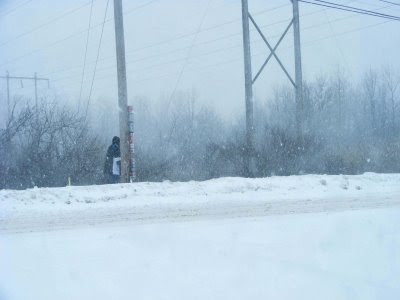 So check this guy out. The town our local mall is located in won't let businesses put up temporary signs so these guys get paid to stand outside all day holding a Sale sign. Even in a 15 degree, blinding snow storm. What you can't see is that over behind the next pole is another guy holding a sign too. I hope that job pays well! 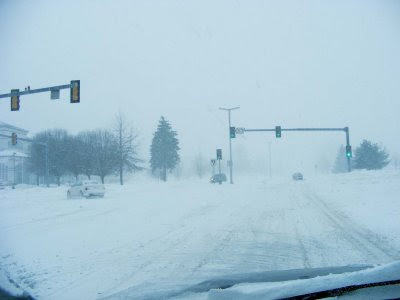 This is what it looked like just after I left the mall area. I don't think the heavy stuff will come down for quite a while ; ) 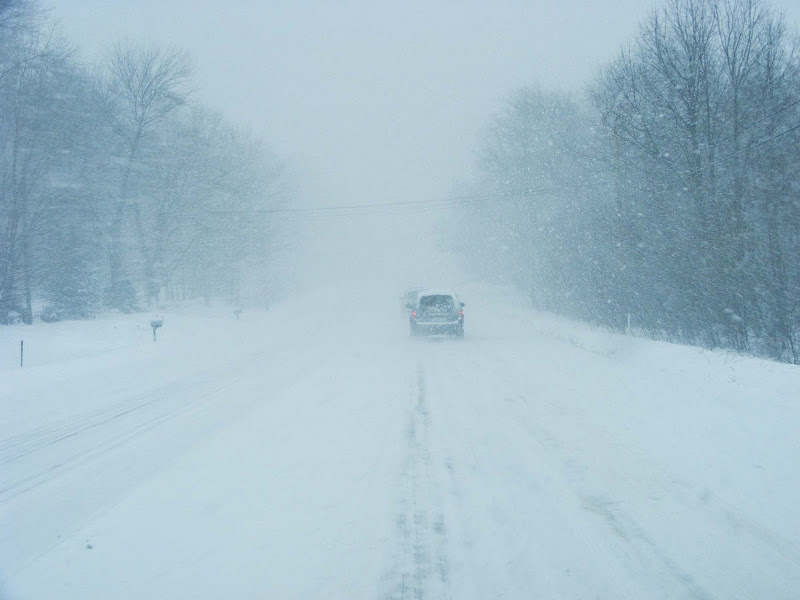 Okay, we're much closer to home now and the snow is getting a little bit heavier. You're wearing your seatbelt, right? Don't be scared, I'm a good driver. We still have to pick my daughter up at work so I'll be able to clean some of the ice off my windshield wipers there. Once we get home I'll light a Balsam Fir Village Candle and we can have a cup of vanilla coffee.

Isn't the snow beautiful! THIS is a New England Winter. Makes you all warm and fuzzy inside, doesn't it? 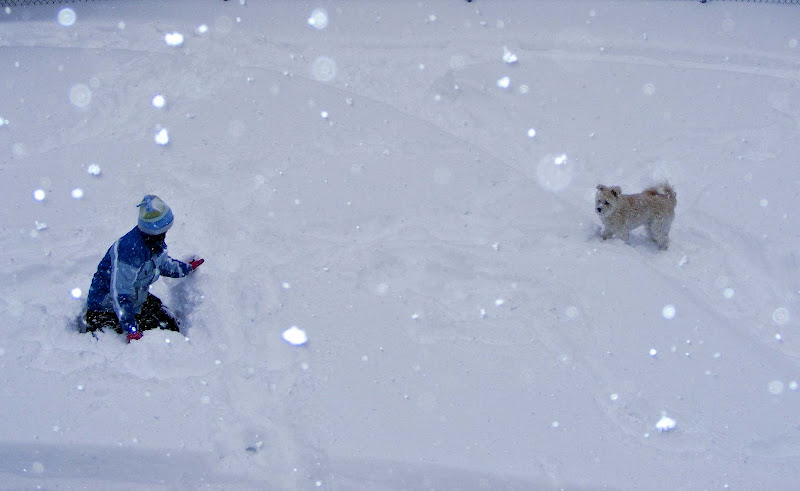 Both Elise and Lily love the snow so this is a natural fit. The snowballs were so bad between Lily's toes she was limping when they came inside. 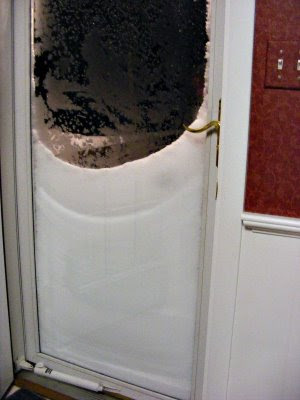 Looking out our back storm door yesterday morning after Friday/Saturday's storm. Don't worry, most of it is from blowing and drifting. The dogs are always a little perplexed about this and can't figure out why I won't open the door! At this point they have to go out the door in the garage which at times looks the same way, but at least the shovel is right there for me. 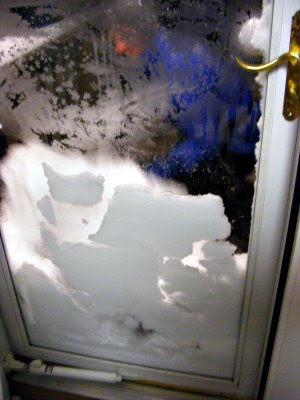 And along comes the dogs hero! Yesterday morning he was up at 5:00 am to clear the driveway, the back walkway, and a path for the dogs with the snowthrower, then he shoveled the whole back deck off. It must have been around 5:30 am when I took this picture. After that, he was off to work. If it were me, I would have been in traction! 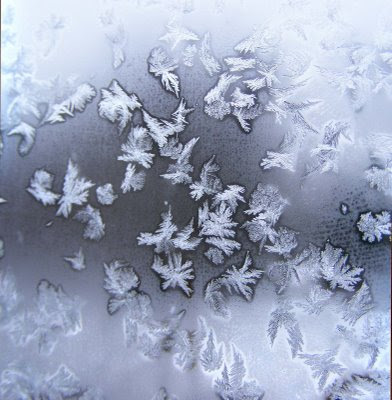 A little macro of the ice on the door 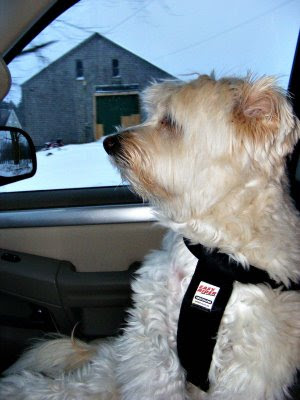 After my husband left for work I got dressed and took Lily with me for a little ride around the local area in hopes of getting some nice snow pictures. I came up empty. There just wasn't room to pull over on the side of the road without taking my chances someone might slide into me. Another day.


Tomorrow morning I will finally finish all my shopping! Yipee! I only hope school isn't cancelled, again. Yes, I do believe it's going to be a very white Christmas!!!

*I'd like to apologize for being so behind on stopping by other blogs, and acknowledging Awards. I'm trying to catch up but as most of you know, it's a crazy time right now. Thank you for understanding.
Posted by A New England Life at 3:10 PM

So fun! I am not afraid to drive in the snow either. All wheel drive helps a ton. I love all your snow pics. I just posted some awesome ice pics from our ice storm. Have a great sunday!

Hey Sharon,
Love the pictures ! Especially Lily looking so cool out riding with mom! You must be crazy out shopping in this snow!!!!!! And a big thumbs up to Brent for the shoveling and snowthrowing!

Oh yes! Best time to shop is when all the other ladies are too afraid to drive... those scaredy cats... haha

Lily looks so sweet... wish I was your neighbor so Missy and I could meet her. She's just so pretty.

P.S. My hero does the shoveling too.

There goes my crazy friend, driving in the snow. All you need is some chains and a big cigar and you could have spent the day pullin ladies in distress outta the ditches! Wow sharon, is that snowdrift on your back deck?
stay warm with the critters and drink something frothy and chocolatey...

It was 23 degrees here, wind chill felt like 100 below - not a drop of snow, the sun was out, I was freezing my butt off. I can't imagine living with that snow! You're my hero - are you sure you're not a mail lady?

I am very grateful for my 4 wheel drive truck this time of year too...but you still couldn't get me out in that to shop! YUCK I hate winter.

Nikki, I'm with you, I hate Winter but this year I'm trying to make the best of it on my blog. *sigh* I'll take palm tree's and mist fans any day over this!

Laura, Sometimes I can't imagine I have to live with this snow either! The mail lady ... lol!

Nancy, You know I had a good warm cup of vanilla coffee when I came home from shopping! That's my back deck alright! A little deep, huh?

Di, All us ladies need a hero to shovel for us ; ) Who knows, maybe Lily and Missy are related. Haa haa!!!

Hi Kristine! It took me a minute to figure out who Rheba was! lol! I should have stopped in and picked you up. hee hee ...

Heidi, good for you! AWD or 4 wheel drive was really the only way to go in todays storm. I did see the pictures on your blog and the storm was NASTY! I have a habit of looking at a post and then coming back and commenting a day or two later. Who know's why. : /

BTW, Brent says we have at least 15" of snow between Fridays storm and today. What the heck!!!!

Looks exactly like what we went through! I have no idea how much we got in Gloucester because it was all horizontal and we had a similar drift against out door. Glad this one is over, now if they would just get the sand truck out. Stay warm!

Winter in New England looks wonderful! I especially loved your photo of Lily all buckled up and ready for a ride around town :-)

I always wondered if I could take a New England winter. The snow sure looks pretty, but I think it's the fact that winter is so LONG up there that scares me...

I am sitting here shievering just looking at your pictures. I am afraid I would be a hermit in the Winter, if I lived somewhere like that. It was 15 with a wind chill of 3 above when I got up this morning, and I have no plans of leaving the house today! No way would I be out there holding a sign. Merry Christmas to you and your family. Enjoy the holidays.
Glenda

The Rantings of a Drama Queen's Mum said...

We were out in the snow shopping yesterday too. My hubby had to drop off his car to be repaired, so I had to drive him. I panic driving in the snow. I did get a Subaru with all-wheel-drive, but I'm so petrified to drive in it. Your dog is so cute.

I love winter! I love the pics. I was out shopping during the storm on Friday. It was totally dead and I loved it.

Hi Sharon! Brrrrr....I need to grab a sweater just looking at your snowy pics. And I thought it was cold here in San Diego with the temp at 45 tonight! Ha, ha! I particularly love your closeup of the snowflakes...so pretty! Stay warm and Merry Christmas to you and your family.

That is quite a storm! So Pretty and white. I do not think I could handle your cold temps.
I really do not mind driving when the roads are more clear, Our subdivision is snow covered as are most side streets. The main roads are clear now. Our streets usually melt after a storm. Not this time.
We are to be dumped on with another 6-12 inches of snow tonight and tomorrow. A once in every four year storm they are calling it. So we will really have snow for Christmas...An all day storm affair.

I want to wish you, Brent and the girls a wonderful Christmas and thank you for all your help as I ventured into this land of Blog. You have been a true gift! Now go get spoiled in the morning!

Beautiful pictures Sharon. I have to take my hat off to the guy standing outside in this with the sign, I would not have lasted 5 minutes!! Stay warm. :)

Oh my God, I don't remember that I saw so much snow in years. Today we had our very first snow of the season and I don't think it will last very long. You made great photos. And I must say that you are adventurous and brave.

I wish you and your family the very best, health and happiness and may your dreams come true. Merry Christmas!!!

Even though I live in Florida (gloomy and 80 degrees today), I miss New England! Thanks for the window seat.

Wishing you a very happy, safe, and cozy Christmas!

Merry Christmas, Sharon. Lily made me laugh out loud! I'm jealous of your White Christmas - on Christmas Day it was almost 70 degrees :o/ But it was a Merry day.

Your photos bring back lots of fond memories for me.

Thanks for the ride.

Oh my, you are a brave woman, and a confident good driver.

The snow is thicker I can't imagine.

Advance prosperous New year to you and your family.

Love the snow pics! I met a girl from New Hampshire years agok and she made me laugh when she commented that she hates snow!

Great Photos! I just found your place through Di, at "The Blue Ridge Gal". You NE ladies have my admiration. If it snowed like that here in Oklahoma we would all be at a total stand still. Hope your Christmas was wonderful.

I so enjoyed reading all your comments! Yes, it was a LOT of snow, but for some reason I found it rather enjoyable. It made for a beautiful white Christmas.