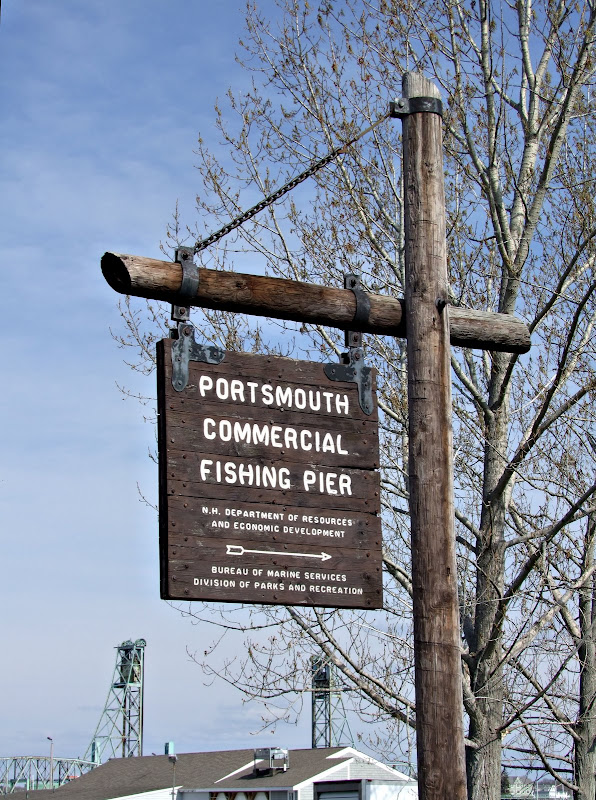 There's no way to hide it, Portsmouth Commercial Fishing Pier is small. Very small in comparison to Gloucester, and there isn't much going on these days. Nestled in between Prescott park and Pierce Island it adds to the charm of the area and is photographed frequently by locals and tourists alike. 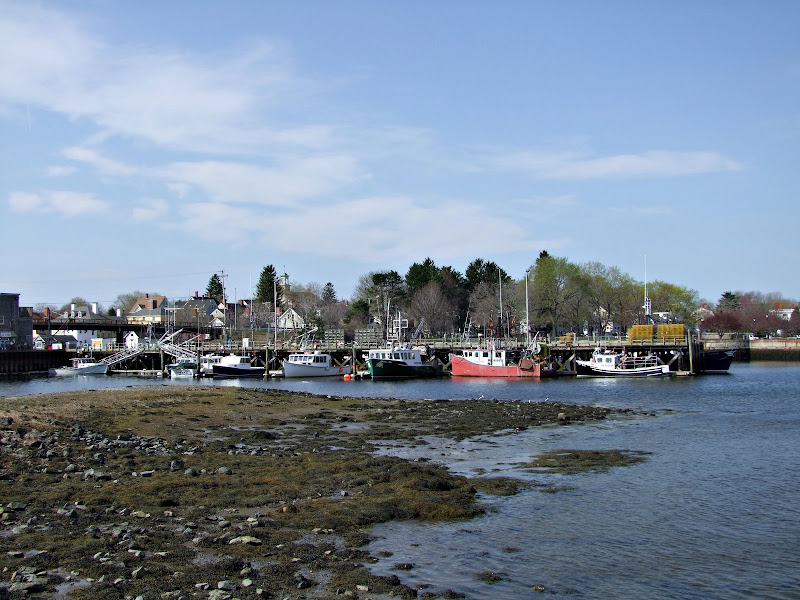 At one time the pier was operated by a co-op who would house and ship the locally caught fish to either Gloucester or Boston. The co-op closed down in November 2007 so the fisherman must now either unload in Gloucester or store and transport the fish themselves to the market, or hire someone to do it for them, either way costing them lost wages and prep time. 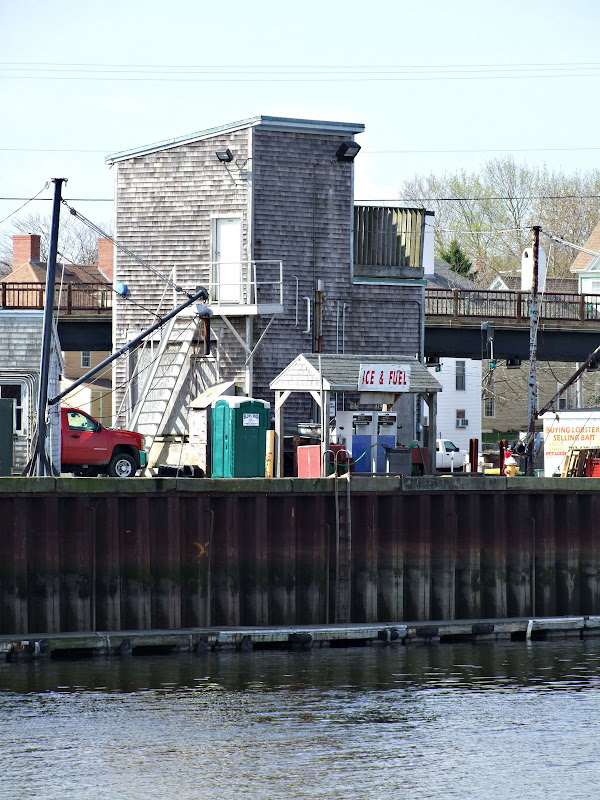 Ice purchases must be scheduled in advance and gas must be paid for with a credit card. Although the co-op has been looking for someone to run the business over for almost 2 years there have been no takers. Many see it as a nonprofitable business venture. 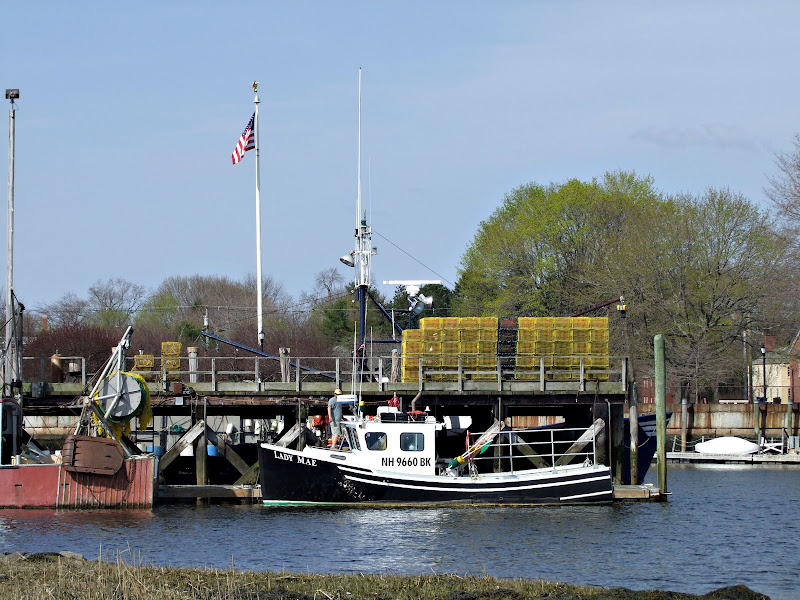 Due to current groundfishing regulations, overfishing, and high permit fees, fisherman are finding it more and more difficult to make a living.

At the time these photos were taken in April there were only 5 fishing boats currently unloading in Portsmouth. Most had moved on to other ports such as Rye or Seabrook, NH, or Gloucester, Mass., or gone out of business altogether. What will happen to the fishing pier in the future is anyone's guess. Considering the pier used to have 60 boats offloading and is now down to 5 may be a sad indication of what's to come. 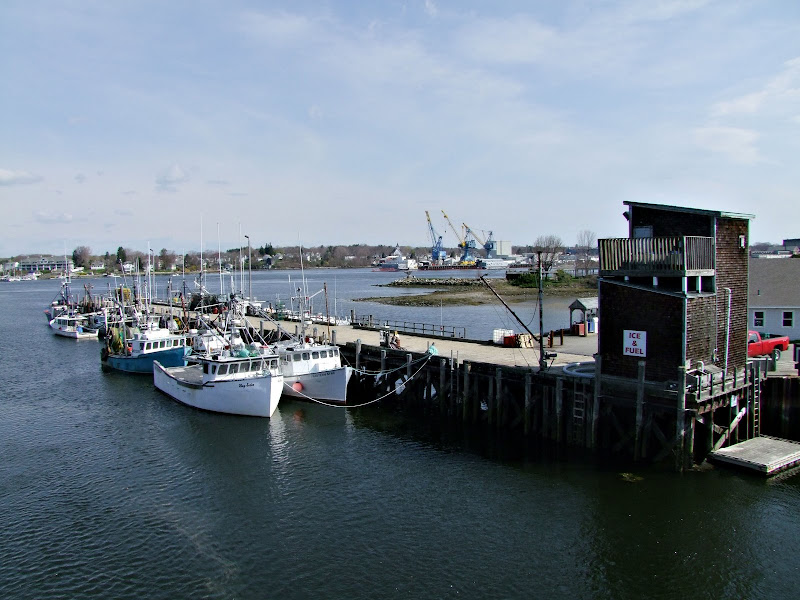 In the mean time many will enjoy the view.
Article on Portsmouth Commercial Fishing Pier: Too little, too late

Very nice photos Sharon! I have been to the pier several times during my life in new England.

The commercial fishing industry has hit an all time low. Lobstermen who make a living bringing lobster to market are having very bad times. I am worried that the quaint seaside working waterfronts may soon be a thing of the past.

The Good Life in Virginia said...

so enjoy your post and photographs...lovely captures.
have a wonderful day.

Not a particularly happy sight Sharon. A sign of the times, I guess, & extreemly difficult for the local fishermen.
Your photos do the area justice.

sad that people are losing their livlihood. will it become a nest of coffee shops, boutiques and souveneir shops? So many places end up like that.

These are great photos. I love your banner/heading photo. Looks like a nice place to live.

Thanks for sharing. Sad to see a place like that shut down.
Glenda

I'm always sad when places such as this disappear. I'm sure this world will reach a point of us having to eat only fish farm grown seafood owned by a large corporation.

Beautiful pictures, sad about yours and our fishing industry. Let's hope our piers do not disappear and our fishermen will be able to continue doing what they love and provide for their families.....Thank you for sharing
Have a wonderful day my friend....
:-) Hugs

I hope this doesn't hurt tourism to places like Portsmouth, Sharon. Interesting but sad news...
xxoo

I always enjoy your wonderful pictures of the seacoast. We recently visited my daughter in Eliot, ME, and had an opportunity to take a few hours to visit the coast. I do miss the ocean and it's nice to visit from time to time. Even nicer to visit frequently through your blog.

What A Fantastic Blog You Have !! I Regret Not To Find You Earlier !! The Post Is Amazing And The Photographs Are Really Stunning !! Great..I Am Impressed..Also I Have Started My Own Website And Would Like You To Have A Look At It.I Would Love To Have Your Comments On That Also.Unseen Rajasthan

That is so very sad to see these small businesses ruined. You told quite a story and thanks for the beautiful photos.

So sad to see things like this happen, but it sure is a beautiful place to take photos!

How is it that every photo you take looks like a postcard, Sharon?

It's sad that fishing is quickly becoming a non-profitable venture.

beautiful photos..you captured the area nicely!
It is a shame about the fishing industry!
Look forward to meeting you this weekend!

I do feel sorry for local fishermen Sharon. Their whole livleyhood is been taken away from them and mostly by places like China. What a pity!! Lovely pictures and narrative.

It's always sad when a local industry dies a slow death. Loved the pics, though.

And on a bright note, I had missed the picture of Winston on your sidebar until today. I loves me a pug. Cute!!

Gorgeous pictures! I love these places you are sharing! Sharon the photography can not be beat!
I am so sad for the commercial fishing industry and for so many others who are losing their jobs. We actually are losing the way of life we have all become accustomed to.
Our sea food last night was so yummy...and I can see why the prices continue to rise.
Thanks sharing the beauty and scenic pictures of beautiful New England!

That is so sad Sharon,
Bigger government, higher taxes are really destroying this country. This reminds me so much of my favorite Island in Maine. Hopefully not the part about loosing businesses. That low tide seaweed just brings back such wonderful summer memories. Thanks!

cool pictures and write up. I used to work on a commercial fishing boat there. Brings back some cool memories.