Sometimes you don't know what's in your own backyard! 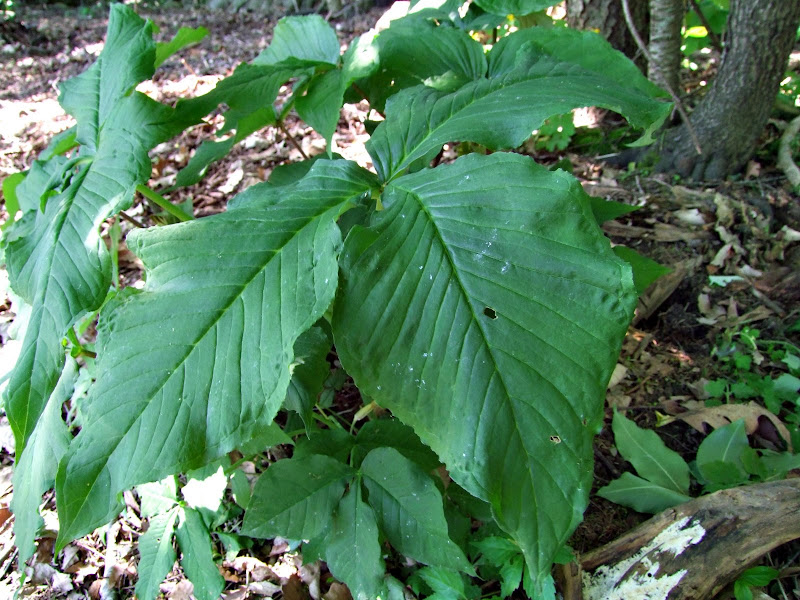 My husband was out back burning some old brush piles this past week when in the middle of everything he came upon this plant. He had no idea what it was but thought for sure it was poisonous so he refused to touch it.
As plain Jane as it looks it's a good thing he left it alone! 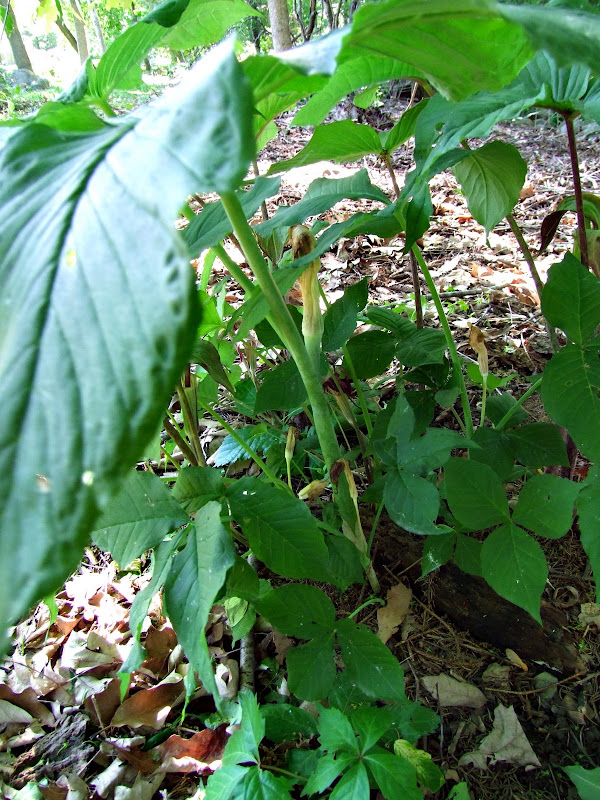 Upon closer examination yesterday afternoon he finally realized it was a . . .

Jack in the Pulpit! 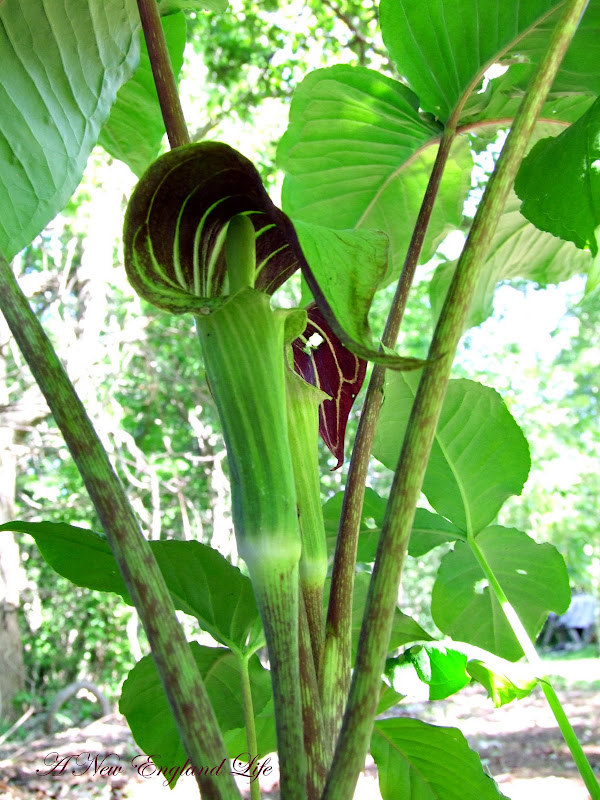 And a darned good sized one at that!
We have no idea where it came from or how long it's been there but we suspect a bird probably dropped the seed, and my husband believe's the plant was there last year too. Pretty cool! 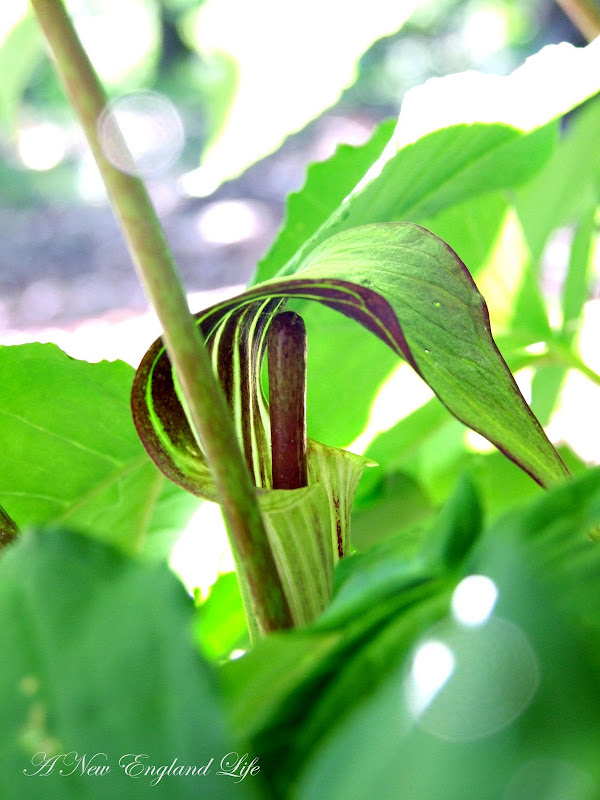 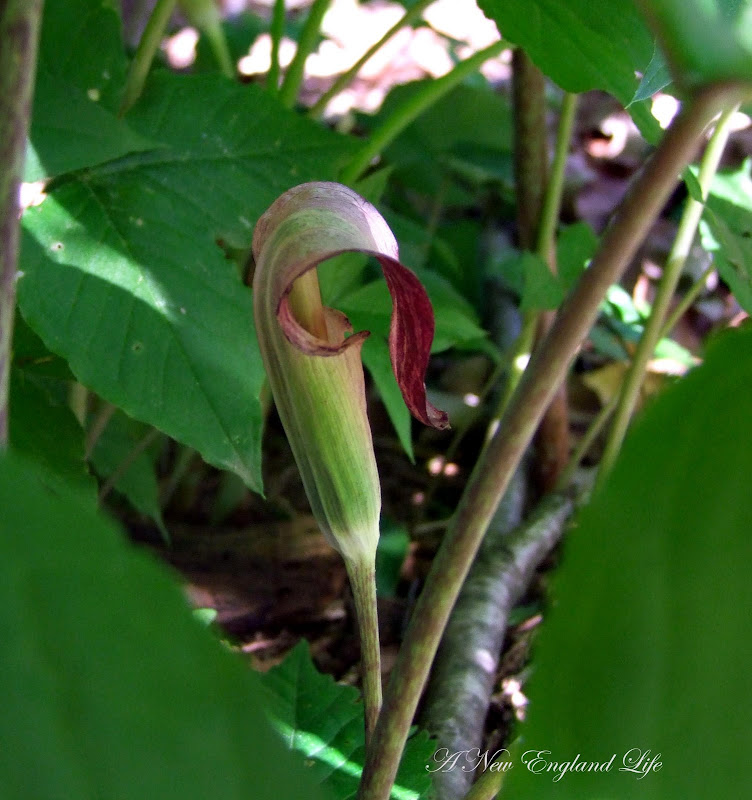 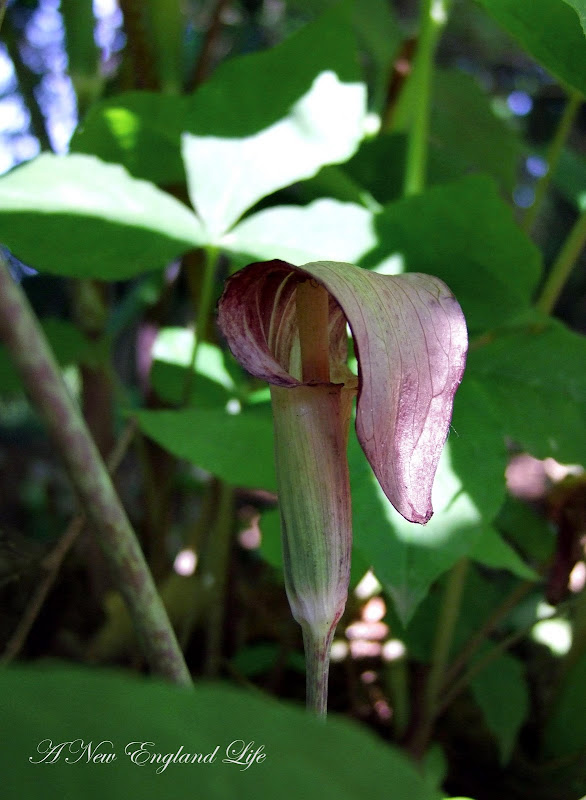 My husband is now going to make it into it's own little garden, most likely with mulch and all.

Email ThisBlogThis!Share to TwitterShare to FacebookShare to Pinterest
Labels: Flowers, Jack in the Pulpit

Oh Sharon what a find. Be careful when transplanting. Remember! It found it's home all on it's own... I dabble in growing orchids and at many shows they have Jack In The Pulpits and they are just wonderful. You are blessed.

How wonderful,.... I haven't seen one for many years!

Gee, I'll have to rephrase that last sentance. He's going to leave the plant where it is but make a garden around it ; )

Me either Cedar! What are the chances there would be one in my own backyard?

Your photos are lovely.

What a beautiful plant! I have never seen one. Your photos are wonderful.

Beautiful plant and so glad he didn't pull it up!

Nice find! Don't think I have seen one since childhood..... aren't they neat!

It's surprising what treasures we might discover right under our nose. Our woods still provide us with Jack In The Pulpits, Lady Slippers in shades of white and pink.

Wonderful pictures. Wonderful find. These are so interesting. I found a couple this year too...same bird?

I have one in my yard also. My neighbor Mrs. Parker gave it to me a few years ago. It's doing well but it's nowhere near as big as yours.

How cool is that, Sharon?! I don't think I've ever seen one of them, although I've heard of them. Add a few hostas and you have a new garden area!

Superb photos and a beautiful plant. I have yet to see one but feel up close and personal with your pics!

Wow, how neat is that?! Beautiful pictures, Sharon. :)

That is just the best Sharon!!!

Oh Cool, I haven't seen one of these since I lived in Vermont!

My goodness, I don't remember the leaves being that big.

Beautiful picture of a gorgeous plant.....how fortunate to have found it.....:-) Bernie

Wow! What a wonderful, glorious find!
You are so lucky to have it growing in the wild. It is gorgeous. Loved the photos!

He looks like a proud turkey. :)
What a great surprise. I would love for one to pop up in my flower bed.

What a fabulous 'find' Sharon.

Thanks for visiting. Nope - Not a woodsy kid of girl. :-) When a kid, we use to play in the woods and the hills all day in the Summer (no body worried about us), and our tummies told us when it was time to go home to eat. Now I am not that brave. :-)
Many are oomplaining about the ticks and fleas being bad here this year also. My daughter said they had to spray their yard yesterday.
Have a great evening.
Glenda

Just wait till you see it fruit. It's a very sexy looking dramatic plant!@

Julie, the fruit is growing! So far the clusters are still green but I imagine they will turn red in the coming weeks.

Sexy, huh? This I have gotta see!