This beautiful snow is all but a memory. We've had rain and warmer temperatures the past couple days causing much of it to disappear. 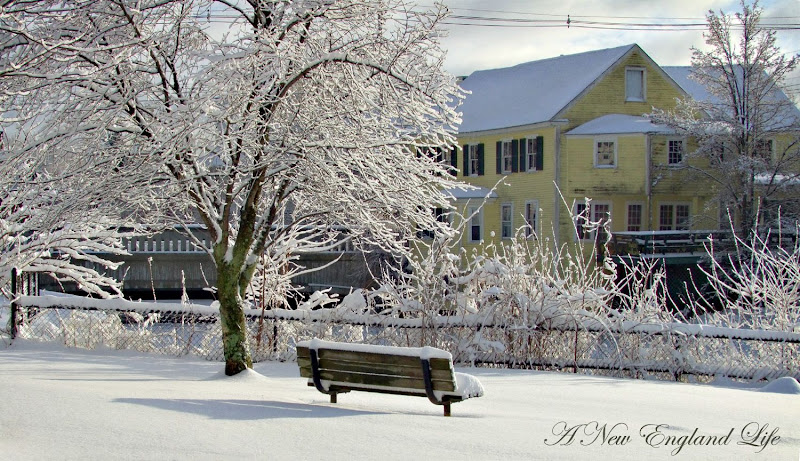 Normally I don't take many pictures of park benchs but I know people enjoy seeing them, and this seemed like a scenic shot, so I took it. I don't like it though. The bench and tree should be more to the left and it irritates me that I didn't have the foresight when I shot the bench to know that. I've taken enough photos that I really should have known that.
Quite often I look back at the photos I took and think the same things ...'why didn't I shoot it differently? Lower, more to the right, left, more sky .... yadda, yadda, yadda'
Let's try this one instead: 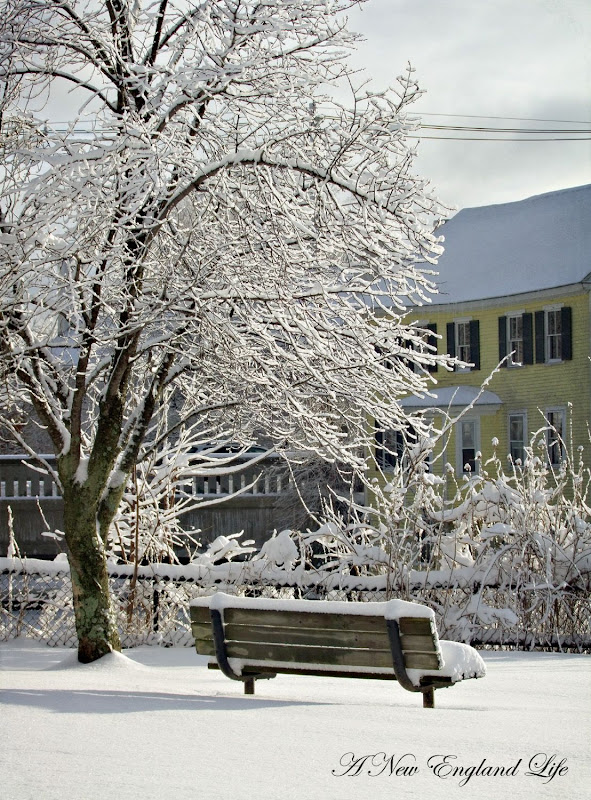 Hmmm ... I think I like the second one best. What do you think?

Both images have the Rapture texture applied, provided by Shadowhouse Creations

After publishing this post earlier today I went back and recropped the top photo. I could crop it much though or I would lose the house or part of the bench. A little better? 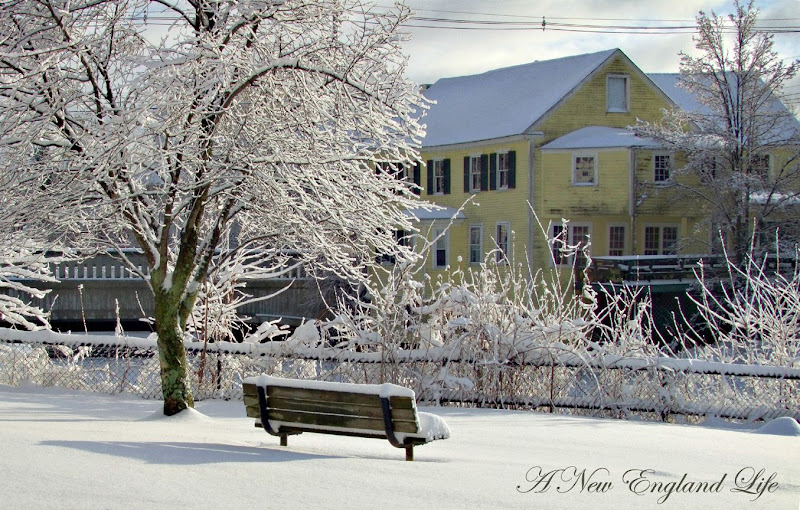 I agree. I only wish I knew the rules. I just shoot and hope.
JoAnn

Beautiful pictures. Sharon. I like the bench right in the middle, first photo but top or bottom they are both great

I agree that the second photo is better. Partly, this is a learning process. You look at the mistakes so you can identify them before you click the shutter. But sometimes, the conditions are simply take it fast and hope you can fix it later. I can understand people liking the bench right in the middle - probably they like Georgian homes, too, with perfect symmetry and the door in the middle.

I'm with you on choosing the second photo. The first one, while ok, does have that bench right smack-dab in the middle of the composition. How do you feel about cropping it so that it changes the comp?

I like them both but agree the second one is more interesting, it focuses more on the bench and tree and just a peekaboo of the house in yellow. If the house was your focus (which here I think your bench was) then you could have shot more to the right and gotten more of the house.
Sorry the beautiful snow is gone, it does make for lovely photographs! Enjoy the warmer weather, though! :)

Ah my perfectionist friend, I like BOTH for two different reasons. Thank you for preserving the snow for us folks down south to dream about. xoxoxo

I like both shots but the second one is my fave. Why did you think the tree and bench should have been more toward the left? If that had been so, the yellow house would have shown more and would have taken away from the impact. Just an opinion. Thanks for the nice post. Sincerely, Susan from writingstraightfromtheheart.blogspot.com

I like both, but I'll throw in a twist. Personally - and this has nothing to do with your photos - I would rather the bench be on the other side of the tree, looking more toward the bridge. Back to your photos, I think both are beautiful and have captured a perfect New England winter scene. =)

Like them both. They are saying we will get some of that white stuff by Fri. - hope they are wrong.

Gorgeous--I love the stillness these invoke, and I am SUPER jealous of all of the snow you have!

Actually, I like them both. I like the composition and picturesque-ness (new word there...) of the first, however, I noticed the details, like the puffy snow on the bench, in the second. It's all good.

I didn't read the other comments because I didn't want to get off track. I like both photos but you're right about the bench. Why not crop to an 8x10, closer to the edge of the tree in the top photo. This will put the bench more to the left.

I agree, the second shot is best.

I think both are lovely, but the second is gorgeous - perfect for a Christmas card.

Wonderful input! I love it!

Lindy, the reason I couldn't shoot it the way you suggested, which sounds great by the way, is because looking towards the water you would actually just see fence and trees. The water sits down low so it wouldn't have shown. Nice idea though!

Cedar and Country Girl Kate, I recropped it and added the new photo to the post. I just would have liked to have seen more of the yellow building, but it is what it is!


Susan, usually the rule is to portion a photo into thirds. Not always does that work, but in general the offset image brings more interest to the photo.

Pink Cat, Oh my! You're staying in Exeter? Well I'll be! I think you'll love the Inn and the quiant little town of Exeter. If you need any assistance in getting around let me know!

But I know what you mean....I get fussy over mine too.

You sound like me...I'm so critical about myself. Before I read your text about the 1st pic I thought OMG she's soooo good!!!!
of course I liked the other ones too.
Just got the cd. I'm so excited to try it!
Thank you so much!
xo,
Carole

I like both the original and the last one. Better than the mittle one. I like the full view of the house and a little distance on the beautiful branches and the snow. But I know the feeling :)

They are all wonderful! I so enjoy your blog Sharon such intersting photos with stories to go along. The best part is I live close enough to travel to some of sites that you touch upon. Thanks to you my husband has enjoed lunch at the Clam Box, he thanks you as well!

I am with you on 'hindsight being 20/20' And I don't follow any rules - that is probably why my pictures are not as good as yours! I shoot what I like and then crop to get an effect that is pleasing to me.

My personal preference (which means nothing, because it is my opinion and in the scheme of things does my taste in a photo really matter?) would be to get rid of the ?front/back? of that yellow building and focus more on the side with the black shutters- I really was distracted by the dirt on that side of the building, It did nothing for the photo. Then I would have focused on the tree and the bench. Perhaps a more vertical shot?

My vote is for the third picture - I like seeing the entire yellow house!

Rules are made to be broken (says the rebel LOL). Your photos are all so beautiful. I particularly like the second one on this series but love all of your pictures. The scenes from the snowy day on the river are just spectacular.

Hi Sharon, they're all beautiful but I think I like crop #3. You always do a great job on your photos. Have a great Wednesday.

The magic of cropping. Isn't it fun to play with composition?

Wonderful winter scene, all are good! The wonders of post processing :-)

They all look quite gorgouse. I point, shoot and hope for the best but there are times when I think I could have taken a better picture. I guess that comes with experience.

Ah, composition-she's an elusive gal sometimes isn't she? I often find myself groaning when I download photos because I didn't get the composition right. Cropping doesn't fix everthing, but I do think the last picture is the best. All were lovely by the way. We have snow headed our way tomorrow...another chance for me to work on that other tricky gal--exposure.

I like #2, and would like it more if the bech were a bit left of center rather than right of center. Something about the positioning I find unsettling......Betty

Yes, you alluded to just what I have been thinking. We all post the beautiful "chamber of commerce" winter photos and ignore the truth - that dirty piles of melting snow are much more characteristic. The wonderland of new snow is so fleeting, but it does inspire the spirit. Is that why we do it?

LOL, I know what you are going through!

Susan at Charm of the Carolines said...

We are expected to recieve several inches of snow tonight. I can't wait to pull out the camera and shot pictures all day tomorrow.

Happy to have found a kindred spirit!

I just found your site and you have stunning pictures. My favorite is this park bench with the trees. I think it would make a wonderful card or framed art.

I also live in New England, Rhode Island to be exact. My family and I go up north for some RV'ng every year. There is always something fun to do or see in NH. Even if funds are low site seeing/nature walks are wonderful.

This photo is so beautiful. Makes me miss snow. We haven't had any this winter which is quite shocking. I love the third version.

You know "Rule of Thirds", yadda, yadda, yadda. But sometimes you just point and shoot and hope for the best and just go for it!