With the weather we're having right now I had no expectations of seeing the full Blue Moon last night, so as I left the house just before 6 PM to pick up my daughter from work I was a surprised to see a partial clear sky with that glorious moon right there sliding across the sky. I almost think it's Cosmos moon! 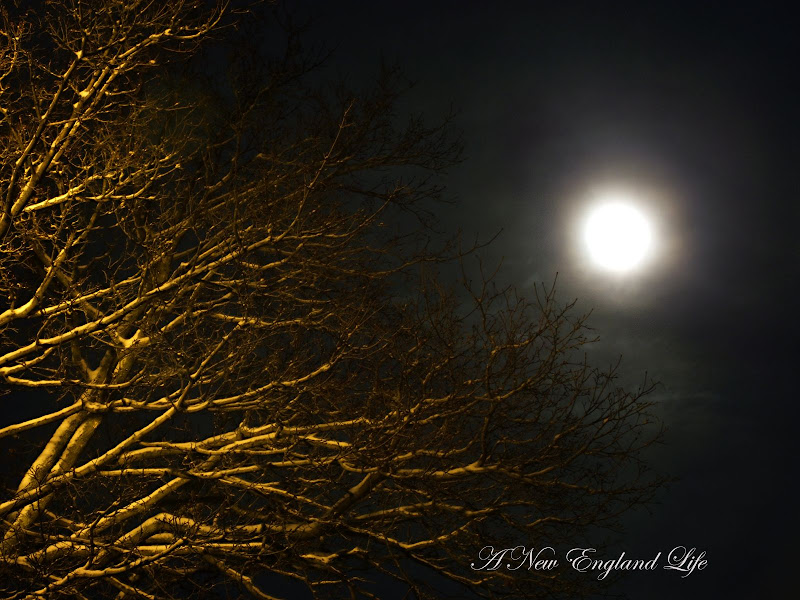 I couldn't get home quick enough to grab this shot. Already clouds were starting to filter in causing a haze which is why the moon looks the way it does.

I took this photo at the end of my street under the street light. After that I felt such a sense of satisfaction that it was my last shot of the year. Bring it on 2010. 2009 ended on a good note.

It's fabulous! Sharon, now you have another header photo to add to your wonderful collection.

Lucky you. We had clouds and heavy fog last night.

your moon shot was better than i could get here. I didn't take the shot. Too cloudy. Nice one, and the haze around the moon just adds to the mood of the photo. Nice!

Great photo Sharon. The moon is beautiful with the haze and I really like the light on the branches.

I have some Blue Moon photos from last night too. I haven't uploaded them to my computer yet so I don't know if they came out. If they did I'll be posting one. I meant to do it last night but never got around to it.

This is really a great shot. I like your heading photo too.

You have a great selectio of moon shots! I am so pleased I found your blog. I especially like the one with purple to blue sky.
I also try to capture it whenever I can, it can be quite a challenge. Here is a shot from a recent shot:

It was to rainey here to see it. I am so glad you shared this great picture. Thank you.

thank you for these beautiful pics.....funny that hubby and i were sitting at home last night...we were being boring too, but we love just being with each other. anyways, we both were enjoying the moon from inside and we kept saying we wished we had a picture of the moon, as it was so gorgeous here. needless to say at -0 something neither one of us had any desire to get the camera out and head outside...so thank you for the lovely pics.

We looked for the blue moon last night and it was too cloudy. But when I got up in the middle of the night to go to the bathroom, it was shining so brightly it seemed like the lights were on! Happy New Year!

Oh, that's so cool Sharon with the tree limbs arching towards it!! Happy New Year my friend!

Stunning photo - did you use flash or just the light from the street light? Whatever, great effect. It remained overcast so we missed the blue moon on 31st, though night before was clear and I saw a stunning moon rise over the mountain. No camera unfortunately. Best for the new year!

What a great photo! Glad you were able to get it, and thanks for sharing all the wonderful sights you've captured last year. I'm looking forward to seeing all your wonderful pics this coming year. May your New Year be filled with many wondrous blessings.

Spooky for next halloween!

I am so in love with your eye and your artistry. Glad to have found you on Twitter!
Kathi

Thank you so much for sharing this, we missed the Blue Moon here because of clouds and snowy-rainy stuff. Whatr a perfect photo to end the year with!

Nope, I didn't get to see it. Maybe next time. The moon brought in a very high tide yesterday. Thanks for showing me what I missed. We're getting snow again.

We saw the blue moon on the way to Mass. Going over the bridge and into town, the moon was huge and you could see the path (reflection) in the river. I wish I'd had my camera. Later on that night...our bedroom was almost as bright as daylight.
Balisha

It's great how the tree shows up. If I ever venture out in the cold after dark, I might give shooting the moon a try!

The tree and that beautiful moon are beautiful together. Fantastic photo.

It looks like the tree is reaching out to the moon. A great shot Sharon.

This is lovely - I used to spend quite a bit of time in New England in my "X life". It's nice to remember the good times.

Perfect..i saw that blue moon coming up over Terrace Hill here in San Luis Obispo, but my nightime photo skills are sadly lacking....something to work on in the new year..

wishing you a peaceful 2010, Sharon and I look forward to more great photography with you...

That is an awesome shot! I love how the barren trees frame the left side of the frame.

missed it! Glad I got to see it here,

A very beautiful photo Sharon. I 'm so glad you got it!!

And a GREAT shot it was,too!
I love the haze,it makes it look that much more mysterious!

Nice photo of the blue moon Sharon. No luck seeing it here, twas snowing. Ended up with 20" from new years day to Monday morning.

Beautiful, Sharon! I was up at 3am shooting from the bathroom window. lol Love the reference to Moonstruck, too. One of my favorite movies! :)

HI there
Carole from Maynard Greenhouse sent me over to see your gorgeous blog! I love all your photography and these last 2 posts on the full moon are just fabulous... I haven't been able to get a shot of the full moon for ages . it has been overcast every month ... but luckily here in Australia we do not have the Blue Moon until the end of January .. so i still have a chance. Great photos... Julie

Fabulous photo. That moon was beautiful. What kind of camera setting did you use to grab this great shot? Happy New Year.