What remains of a wild nor'easter

As many of you know we had a major Nor'easter rain storm this past weekend. In our town alone we had over 7" of rain! Yuk!
However, once the clouds cleared Monday night it's been nothing but beautiful outside! Come Tuesday morning I was out and about try to capture some of the mayhem. Not so easy since roads were closed everywhere due to flooding, but at least I was able to get to the beach. Seems I'm always going to the waters edge lately. 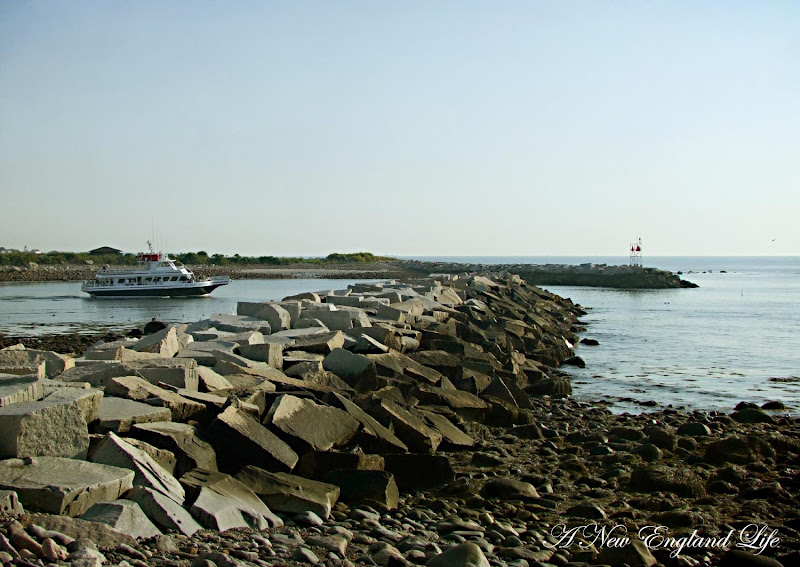 This is a view from Rye harbor jetty looking across the way towards Rye Harbor State Park (aka: Ragged Neck). See that big clump of green bushes in front of the boat? That's where I was standing to take the following pictures. I just want you to know I stayed a safe distance away from the waves.
This website gives a beautiful overview of the whole harbor area. You'll find extra pictures of Rye harbor from different angles on the right side of the page.

Alright, so let's head over to the park on the opposite side of the harbor. 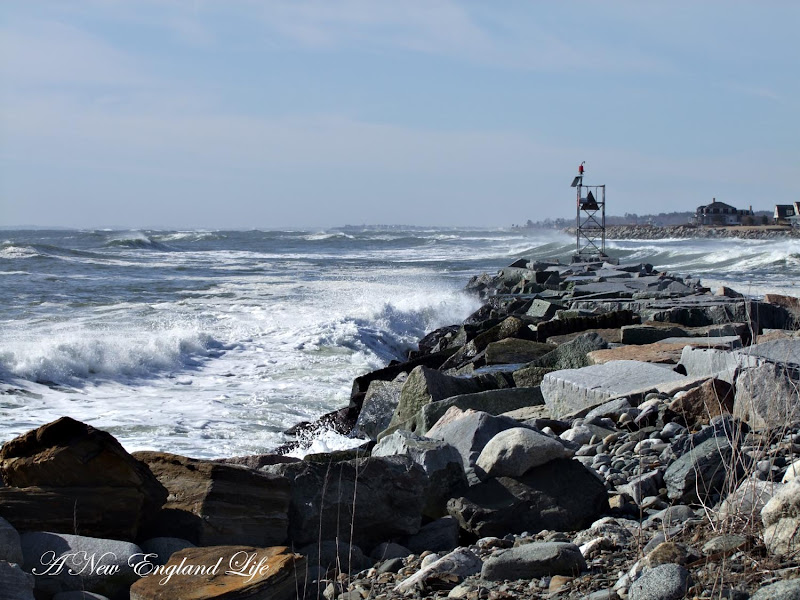 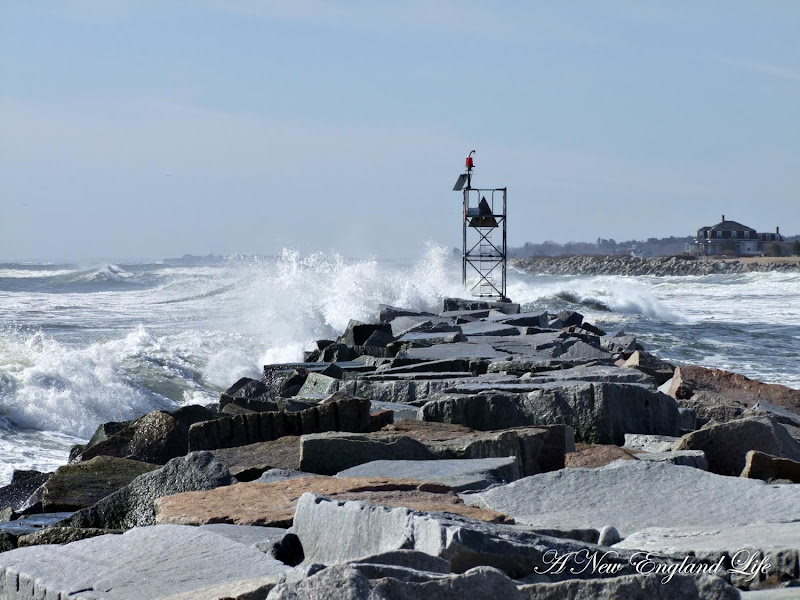 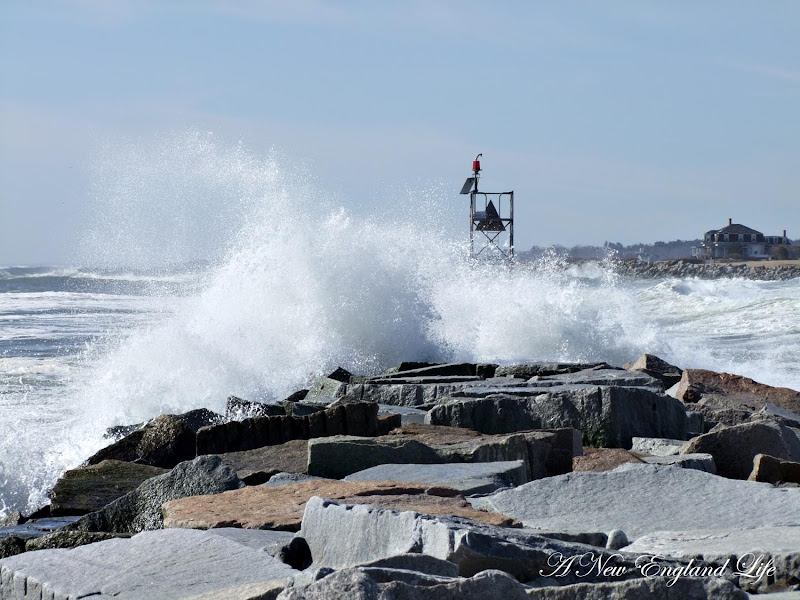 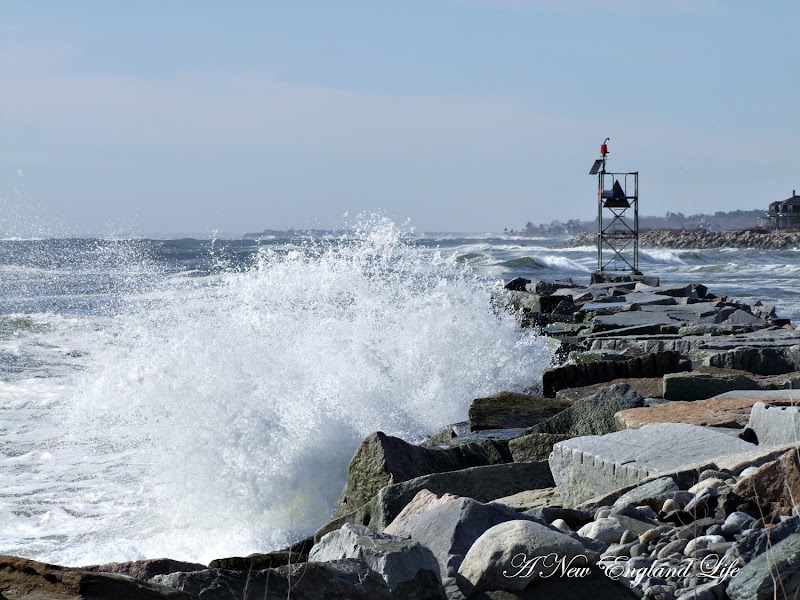 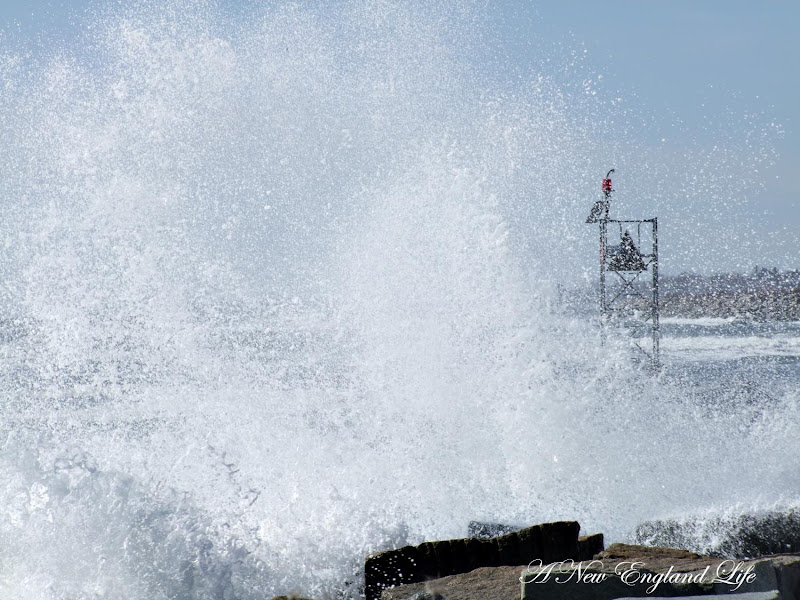 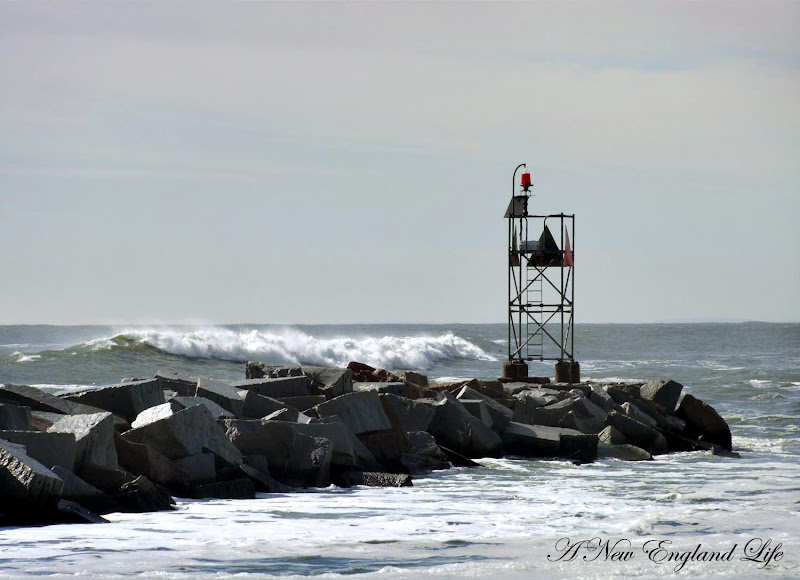 As I was leaving I looked back and grabbed a few more shots. I have to say, I do love the ocean, and water in general, but it scares me. Even standing a safe distance away, the power of the waves makes me nervous. I told one guy he should back up because you never know how big the next wave will be. The tide was coming in making the waves more ferocious all the time. 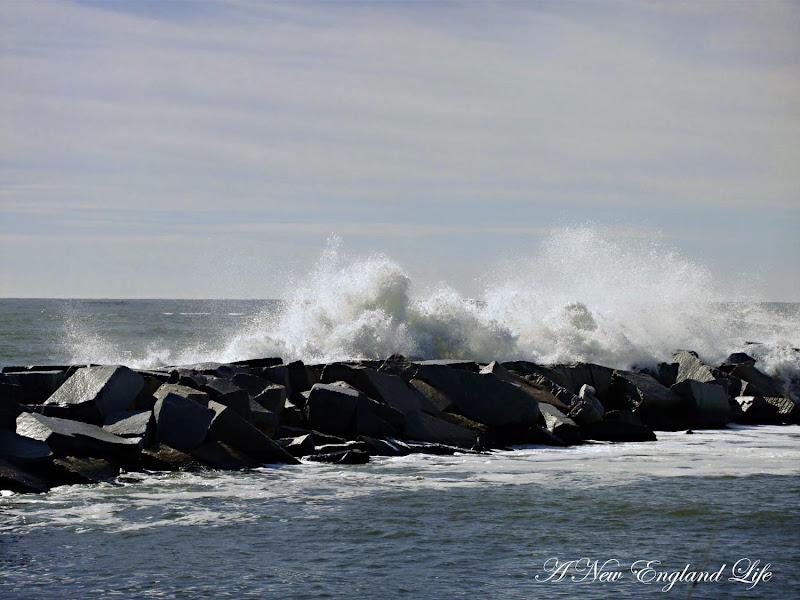 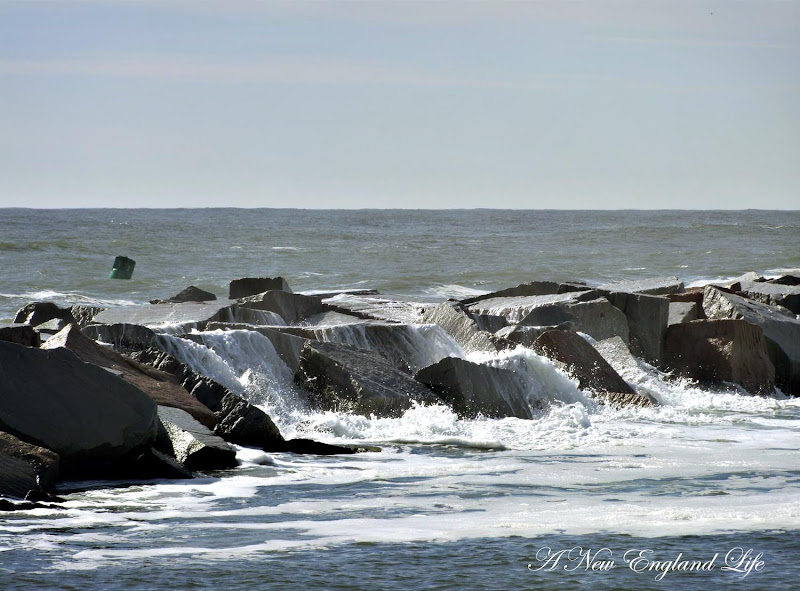 I'm just so thankful that all the rain that fell wasn't snow!
Posted by A New England Life at 11:00 AM

I'm like you. Love the water but it has my deepest respect.

Now that would not be a good time to go for a swim! :p

This desert dweller (and former New Hampshirite) loves all of your water shots, so keep them coming, please. This series made me feel that old fascination with standing on the beach, watching the waves come in. Thank you for sharing these photos.

Clair, that's nice to hear because I have so many more oceanside photos to post. Sometimes I think it might be overkill! LOL!

I can't believe all the rain, people that never had water in their basements before had a ton !!!

Love the pics of Rockport your daughter is a cutie :)

So beautiful, so powerful! I would respect the water too by the looks of the waves.

You know what, Sharon? I'm scared of the ocean's power, too! Once, I almost drowned by being carried out way too far by an undercurrent. I was lucky someone came to my rescue and somehow, miraculously, we got back to shore. But after that, oh Lordy, I am SCARED of the ocean. Great shots, though. Sincerely, Susan

I love waves. I could spend hours just taking photos of waves.

Beautiful pictures of the ocean Sharon. I love waves but I have a lot of respect for them.

Simply AWESOME photos,Sharon..I feel the splashes and the POWER of it all!

I've never been to the east cost but have always wanted to! I'm living vicariously through your photos! I can tell how powerful those waves are!

Photos of the east coast of your part of the world always makes me feel so melancholy, I just want to jump on a plane and return there to visit again.......your photos are special to me, they truly are.


I can smell the ocean and hear the crash of the waves as I sit here in a tiny town a long way away from the sea in Australia.

Excellent photos... the action shots of the waves are super, makes me want to pull out my oil paints and paint!

WOW ~ I felt like I was right there with you when I looked at these ~ and I got a little queasy myself. Nature is powerful!
You got some FABULOUS shots!

These are beautiful Sharon! The waves look so powerful...I would have been nervous too!

Great pictures! I also have a deep respect for water.
Have a great weekend.
Glenda

Is there anything prettier than ocean spray?

That was quite the storm, lots of damage. Loving the weather forecast for the next few days.

Great Pics! I love the ocean also, but have great respect for it. Like you said, you never know how big the next wave will be.

Two things I have great respect for: water and fire. I love the ocean. It's so powerful. Nice shots...as always.

Sharon, Love your photos. You inspire me to keep trying to get better pictures! I am going to try picassa and see what I can come up with.

Thanks for giving me a piece of the ocean today. :)

I, too, am afraid of the waves. I was afraid of tsunamis before people even HEARD of them! I will wade into the water up to my knees or a little bit higher. THAT'S IT.