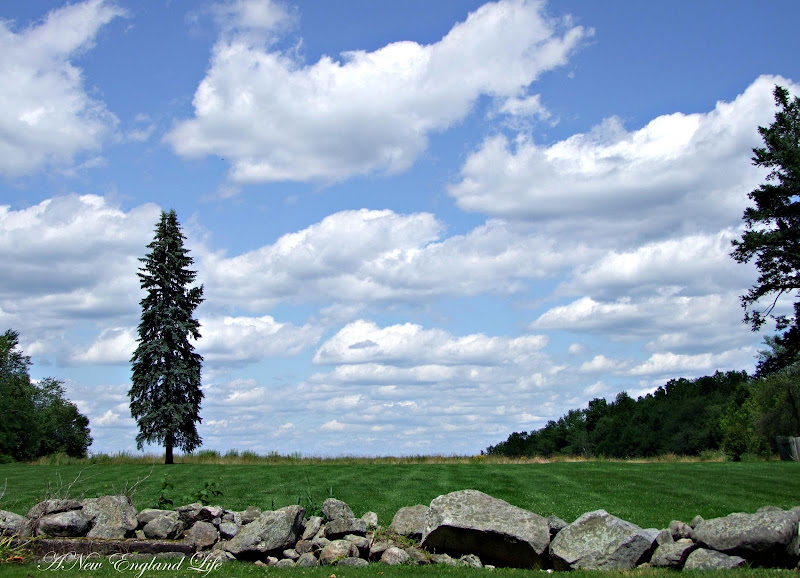 I posted it back in July 09. So many of you commented on how beautiful this photo was. I too was so taken with this scene. So romantic, so picturesque. Somehow it seems like you should be able to see forever from the crest of that hill, sitting in an adirondack chair, sipping lemonade. It's in my own little town and yet I had never noticed it until about a week or so before I photographed it. How did I miss it? Did anyone else notice it?
This morning I had to drive my daughter to school after an appointment. The tree is on the way. As we neared the field I had a terrible sinking feeling. Beautiful soft Firs and Spruces did not fair well during our horrific wind storm last Thursday night. The trees are tall, the roots are shallow. A recipe for disaster.
I wish I could give you good news. 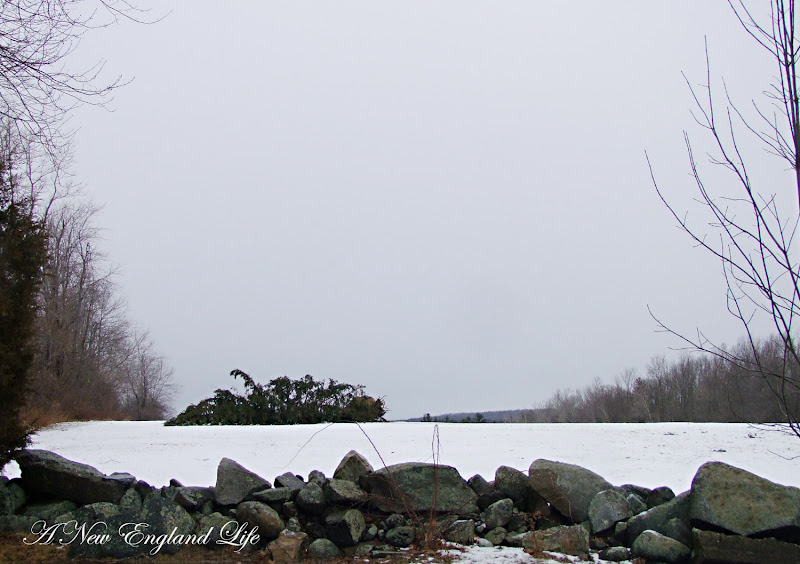 So many storms before this one. So many, but this one was the one it could not stand against. I was heartbroken, as I'm sure the owners are too. Even my husband had a heavy heart when he saw my photos. He figured the tree was at least 30-40 years old. 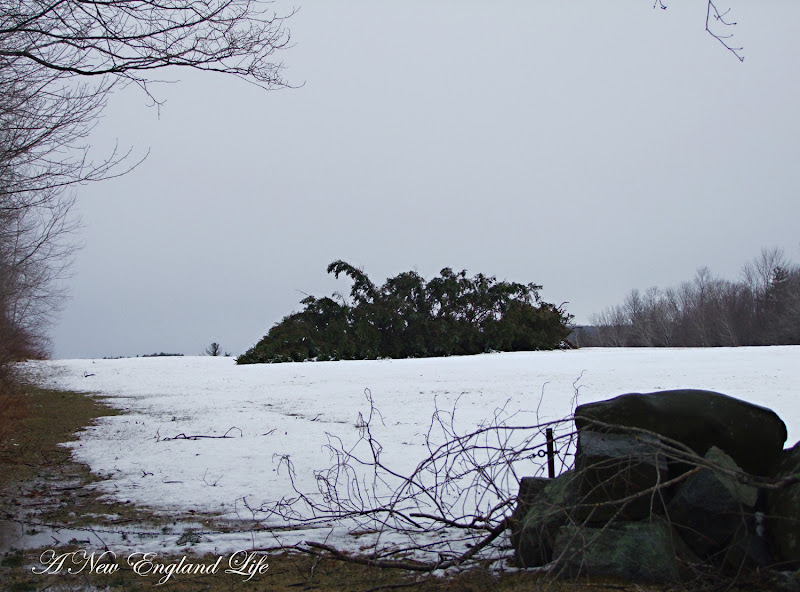 It's doubtful they would ever right this tree. It would cost an enormous amount of money.

My friend Allison left a comment on my recent post about the storm (Spring can't come soon enough) saying her dad had lost two 150+ year old Cedars during the storm at their farmhouse in Maine. She said he was nearly in tears when he told her. There's something about a tree that can really tug at our heart strings. It's amost like they have a heart of their own, bending with us through the seasons.

Read about 101 year old Frank Knight of Yarmouth, Maine and learn the story about his beloved tree. I hope you will also watch the video. It's very moving.
I thought about waiting to photograph One Tree Hill until the sun came out. This mornings weather was quite grey and raw. I instantly knew it matched the somber mood of what was once a tall, majestic, proud tree.
Posted by A New England Life at 10:57 PM

Email ThisBlogThis!Share to TwitterShare to FacebookShare to Pinterest
Labels: Winter

I kept telling myself to go back and photograph the tree after a snow storm, and yet I never did.

Sometimes you just don't get a second chance.

That's such a shame :( The circle of life is brutal sometimes.

At least you immortalized it in a beautiful photograph though ♥ A worthy memorial.

How sad. Trees take sooo many years to grow. It's heartbreaking to see it lying there.

Oh that is so sad. One of my first posts when I started blogging was about a tree that was torn down. I was sad too. The tree was a sapling when I was a child and it literally grew with me. I know what you're feeling.

Oh this is sad...funny that with trees. We drive past a hill with one solitary tree on it when we used to go visit my nana - if anything ever happened to that we'd be devestated - and it is weird but when I have mentioned it to other people from the area they know what we're talking about when we mention ' the tree on the hill '. I also used to write letters to a tree when I was a kid - I used to put them in the top of its branches with some smarties - my dad used to lift me up so I could do this. Then someone decided to build new houses on top of the wood...so I lost my tree friend :( xxx

So many trees down from this storm. It's so nice the way you have captured this. Perhaps the owners would like a copy of the pictures? good thing you didn't wait for the sunshine...the tree may have been rotted by the time the sun comes back out around here.

Ohhhh, Sharon, that was a lovely post. The story about Herbie really does touch the heart. So sorry about the majestic tree that didn't make it through the storm, too. Shows us that all things change, whether we want them to or not. All good things come to an end (eventually). So we must appreciate them while they are still here. Thanks for the lovely tree stories and photos. Sincerely, Susan from writingstraightfromtheheart.blogspot.com

Oh, so sad. We lost so many beautiful trees in our city during last year's ice storm. We are officially a "Tree City USA" honoree, so trees are a big deal here, and we were devastated by some of the tree losses. Surprisingly, things looked much better when the foliage came out in the spring, but the scars (and holes) are there. I feel your pain. Truly, I do.

I am choked up looking at those pics. I want to run home and hug my beloved maple and my cedar (which gave me my username) in front of the house.

Oh, Sharon... I hate to see that this lovely tree is no more. The story of Frank and Herbie gave me a lump in my throat. Somehow trees just are THAT special.

How sad that is, such a beautiful old tree.

That really is heartbreaking to see it down like that. Very sad.

Hi Sharon. I read this blog post early this morning and couldn't find any words. I was so sad. I am very attached to the old oaks on our property and love them. They have their own personalities :) We have had two devastating ice storms since we moved here and I hated what it did to our trees. Reduced me to tears. I loved the story of Frank and Herbie. Even though I was sad I loved this post. I want to think that it may be possible that the owners of the property where this beautiful tree went down might plant another in it's place. For me if I lived where you are and drove by regularly it would mean so much to see a young tree starting a new story there :) That beautiful place you pictured would not be about an end but a new beginning.

That is so heartbreaking. I've come across many fallen trees this past week, but your before and after photos of this particular tree are incredibly powerful and terribly sad. Perhaps you could make a print of the top image (which I absolutely love) and hang it in your home.

Winter/life can be brutal. I too have been saddened by the lost of a landmark, a beautiful tree taken down in an instant. You do wonder why trees can withstand the elements for so long before they succumb.
You are right sometimes we never do get those 2nd chances.

I always feel sad when trees go down, no matter what the cause. It's even sadder when a tree is an old one.

the first picture is beautiful.

Oh gosh, I just watched the video. How tender.

This made me so sad...it is like that here when we travel out on some of our favorite woods roads to do some photography, only to learn that an entire 40 acres has been "clear cut" during the winter.....it looks like a bomb blew up all the forest and nothing is left when they do that.

Oh how sad!
I am glad you were able to immortalize it.

This is the way of living and dying, shifting, changing, becoming something new. But still, sad.

And we wonder if a tree falls and no one is there, does it make a sound? It seems such a small question when a wonderful tree is lost.

The first photo is quite beautiful, the rest of them - devastating. I am a tree lover, so that just breaks my heart.

So sad! But I guess that's the wonder and harsh reality of nature. Your photo last year provides a lasting memory of such a beautiful tree though. x

deep sigh - what a sad sight to see... but thought provoking...

It is indeed a sad thing to lose a tree perhaps because they mean so much more to us than we can explain...

Perhaps you should give a copy of your first photo to the owners -- they might appreciate the memory.

Sharon--I began to read this post and almost couldn't scroll down to the second picture. A lump immediately rose in my throat . . . and then I read further and saw the mention of my Dad's trees and I cried. So raw, so real. So good though, that you captured the beauty of the tree before it was lost. We try to console ourselves with the circle of life saying, but sometimes it is just too cliche to bear.

What a deeply moving post! I, too, for many, many years enjoyed a certain stately, lone tree every time we drove back to our hometown. When that tree also succumbed to a storm, there was such a deep sense of loss. I miss it! I can relate to your story. I'm so glad you have that gorgeous photo of when this tree still stood tall and pointed heavenward! I really enjoy your photos!

Trees are apart of us...Age & their resistance to the elements seem to take a toll one way or another...
I remember planting evergreens with my Dad when I was MUCH younger. To see his smile and his eyes light up at the plantings made it All worth the digging.
Trees have a wonderful History of Time as with sharing a day with a Dad...

May Two seedlings grow in its shadow for the Majestic loss at
'One Tree Hill'...

What a sad turn of events! You did well in capturing the fallen tree in the bleak gray of the day, a vivid contrast to a day in 2009 that was sunny and the tree had not a care in the world.

The storm did terrible damage to trees throughout New England. In my neighborhood, mighty spruces are down, taking with them a generation of life on this earth. With the fallen trees came power outages, of which we here at home suffered through nearly four days without power. Everything in our fridge and freezers were ruined and had to be thrown away.

During the whole time, I made sure the birds had plenty to eat. I found several Gulls that met with disaster. One was slammed into a telephone pole and another into the side of a building. I also found a poor little Chickadee that met its demise, unsure as to what happened to it.

Hurricane force winds and flooding rains removed from the landscape the sentinels of the forest. May they rest in peace.

I'm so sorry for your beautiful tree! I have a special fondness for certain trees on our cabin property - particularly the pines. That first photo is just gloriously beautiful.