A love that sustains 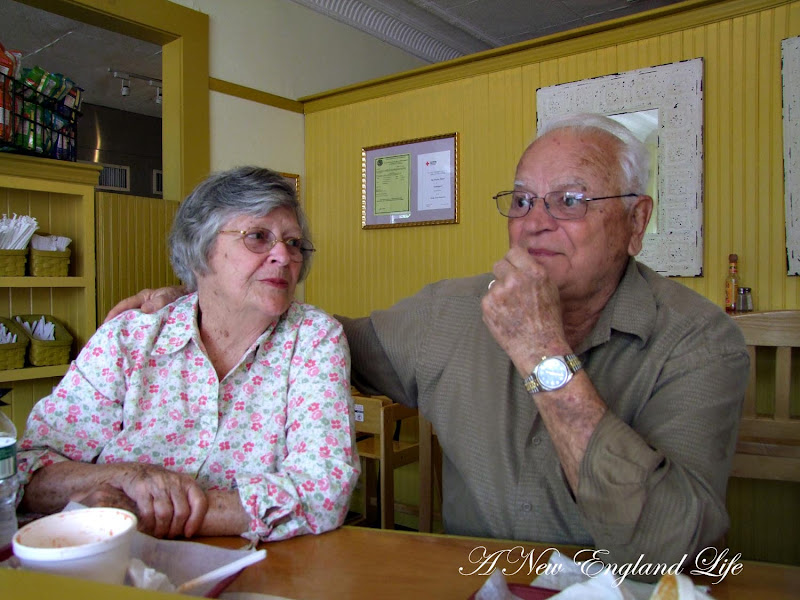 Married 62 years their marriage is one that has surely seen it's fair share of ups and downs. They first met when he was 22 and she 19. He got out of the service the day before and was hanging out with 2 of his buddies in Portsmouth. That's where they met up with Sally and her two friends. From that day on the two of them saw each other almost every single day, but didn't kiss until 4-5 months later. She finally asked him if he was ever going to kiss her. lol! He said there wasn't any hurry. Now that's a gentleman. You just don't see that anymore.

They sat right behind us on Sunday at The Purple Onion where my daughter and I went for lunch. He said they come for lunch quite often and always sit in the same place. Sally orders the Sweet and Sour soup while Frank goes for the Chili. He says he's not crazy about Chili but there's is pretty good.

They have 3 children, 59, 58 and 54, along with several grandchildren. Frank said family is the most important thing there is. He says they have been blessed. For 24 years the two of them went to go to Florida for 6 months at a time, often having the kids down to visit. Now health issues keep them close to home.

I can't tell you what a pleasure it was talking with both Frank and Sally. Before I took the photo she made him take off his hat which I thought was so cute.

We talked for quite a while. They asked me about my family and children, and talked about their own lives. As we left I couldn't help but wonder what their future holds. I shook their hands and wished them all the best. Honestly I wanted to give them a hug. Sometimes you meet people who you feel like you've known all your life. 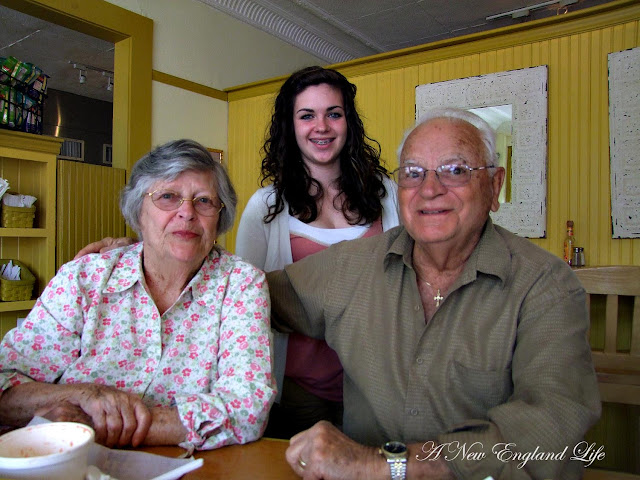 Frank insisted Elise be in this photo with them 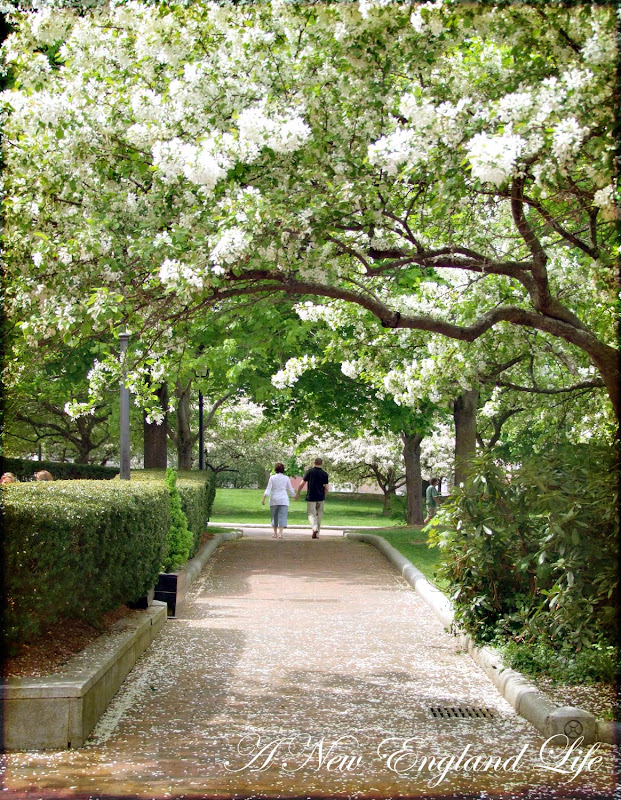 Romance was definitely in the air on this perfect afternoon 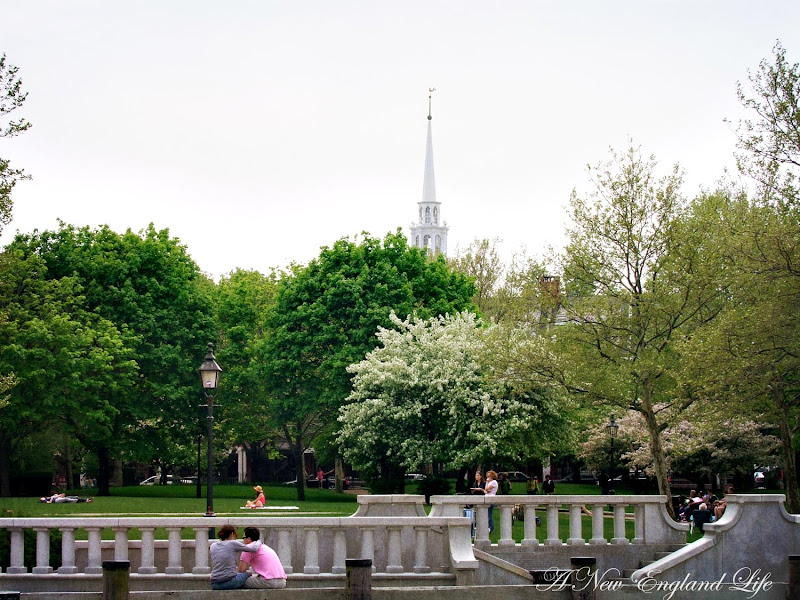 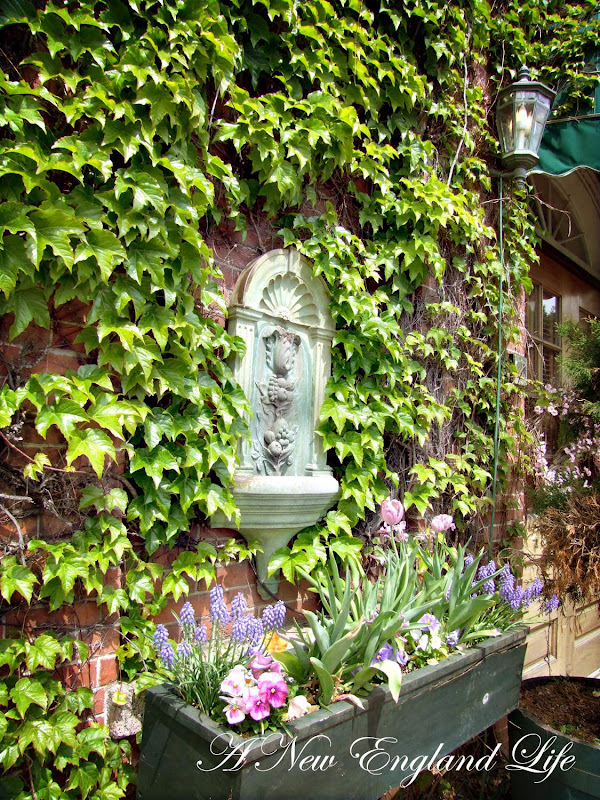 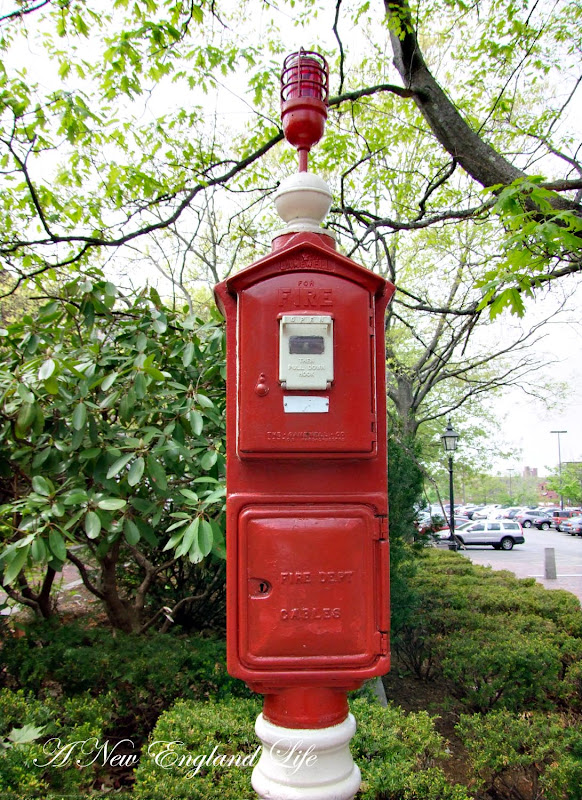 And finally, an historic Fire Alarm that sits a mere feet away from the restaurant.

I hope you enjoyed our day in Newburyport. I'm sure we'll be heading back before too long, though I don't know if we'll be seeing Frank and Sally again.
Posted by A New England Life at 7:34 AM

I once knew a couple that had been married for 50 or 60 years too, but they were the nit picking type that did nothing but constantly nag and criticize one another. It's nice to hear about a couple that truly respects one another after all those years together. THAT is what marriage is meant to be.

That brought tears to my eyes. Beautiful :)

Spring is so gorgeous! Thanks for sharing such a cute couple. I'm sure you made their regular routine a little exciting!

Thank you for sharing Frank & Sally's story:) What an inspiration. I haven't even talked to them and I want to hug them!

What a lovely story and great pictures again.
Have a great weekend.

What a sweet couple. They must have had an incredible journey together. Truly a real life love story.

All those years together, amazing!
Sally & Frank really look a lovely couple. My parents were married for 64 years until my fathers death several years ago. Family a definite blessing!

Sharon, what a nice story. Your pictures are great. I love Newburypot not only because three family lines came to the area (Newbury) about 1635 but also the shops have beautiful flower boxes and the rows of old houses that are close to the streets.

It is so lovely to meet people like that with such a rich tapestry to share. What a sweet photo with Elise!

Great looking couple! Hope they have many more happy years together.
Happy Mother's Day! Have a wonderful weekend!

What a beautiful story Sharon. I loved like that once and know how it feels.

Such a sweet post and beautiful photos. I've been meaning to try that place. Thanks for the input!

What a great couple and love the photos!

By the way, Sharon, can you tell me what size your photos in today's post are? I can't seem to get mine that big because I don't know what size they are. I'd appreciate it if you could share this information with me. THANKS!

What a touching story! Love is definitely a test of time.

What an adorable couple. I can see their goodness in their faces. 62 years(!). I truly can't quite fathom that. I love spontaneous meetings with people like that. And, I DO hug them.

Thanks for introducing them to us all.

They look like such a sweet couple! You sound a lot like me. I'm forever striking up conversations with strangers! Most people seem to enjoy talking with us.

Looks like spring AND love is in the air there! I could use a breath of fresh spring air about now!

What a beautiful post! Thanks for sharing this inspirational story! God bless!

I absolutely love going to a local eatery in a town and chatting with the locals.

A relationship like Frank and Sally's is wonderful. Sitting in a lunch place, holding hands, aged and wiser for it--beautiful.

Thank you for sharing your story and pictures of Sally and Frank...what a wonderful couple and what an inspiration. So beautifully told, Sharon!

Dear Sharon,
You are a lovely photographer. And this story is wonderful.
Can't believe I missed this post.