All of the following photos were taken in Strafford, NH. A wonderful old scenic New England town incorporated in 1820. It's actually just up the road a piece from where I grew up. 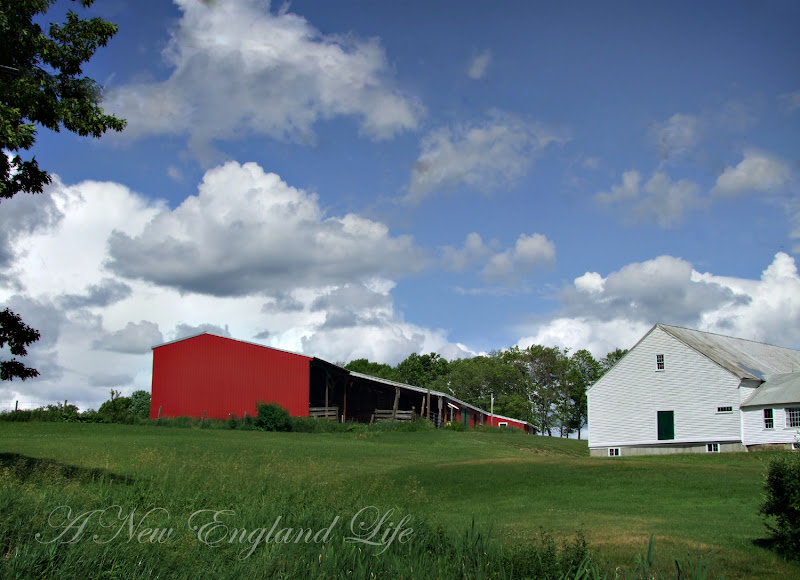 The reason I've been in Strafford is for work. It's about 45 minutes away from home which I don't care for. But tomorrow will probably be my last day.

The following pictures are of a beautiful field/driveway I found. I kind of wanted to play around and give the photos a 70's look but only one ended up that way. Each photo has different textures and actions applied. Don't ask what I used because I honestly couldn't remember at this point! 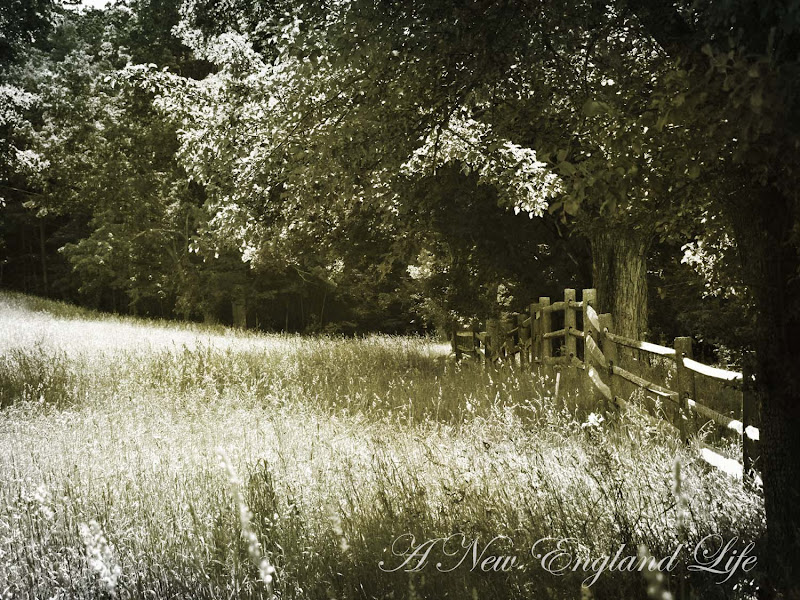 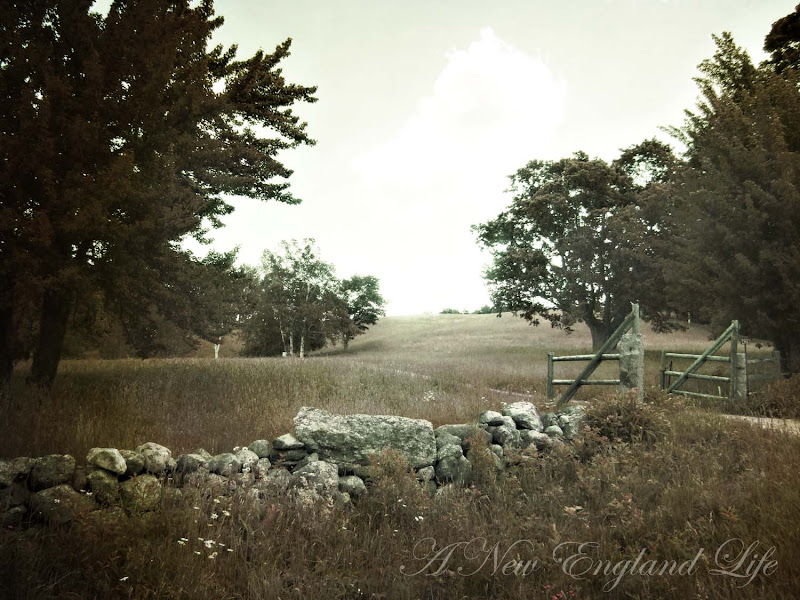 I couldn't see a house anywhere in the field, but there is a number and mailbox at the end so someone must live up there! 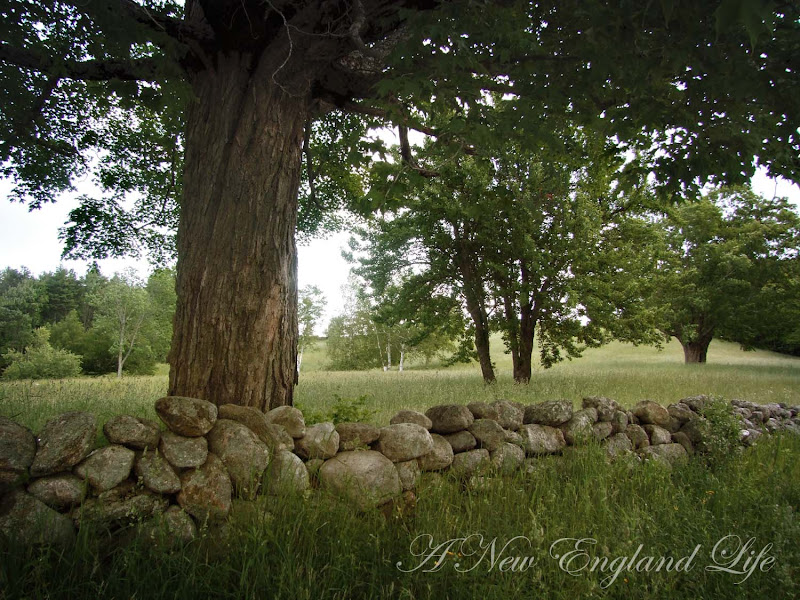 What's new in your yard? 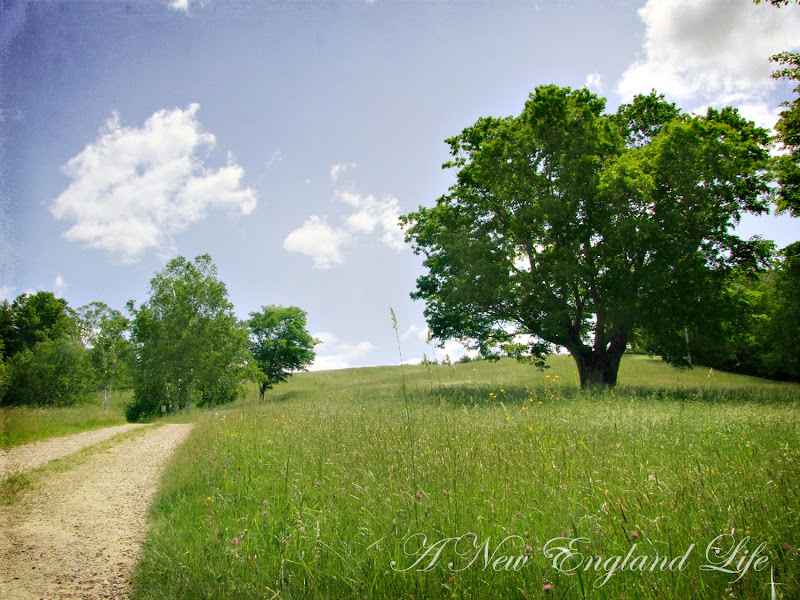 This one was the only image I thought had a bit of a 70's faded feel, and it's probably the one I like best. Do you have a favorite?

For the past several days I've wanted to post but my laptop drives were so full it wouldn't let me even look at my photos, much less work on them in Photoshop. Yesterday my husband and I decided it was time to clean it out and take it back to factory settings.

I backed everything up, and my husband thought he did too. Email addresses, bookmarks, program files, document, pictures, the whole shebang.

Once my husband got the laptop up and running I realized my email addresses weren't where I thought they were. I found the folder but it was empty! Yikes! Luckily my husband copied the C drive onto the external hard drive. There, in my Recycle Bin, were duplicates of most of my email addresses. I had dumped them a few weeks ago because I accidentally duplicated them. Phew! Besides that, it's like I have a new computer! Everything runs fantastic! We should have done it a long time ago.

*All textures are from Shadowhouse Creations (because his textures rock!), or were found randomly on Flickr

I love the photo of the driveway with the rock wall/gate at the end where you can't see the house.

You weren't far at all from my neck of the woods! I live in Island Pond Vermont.

First of all, what a beautiful blue sky in that first photo, with those lovely fluffy white clouds!

I think I like the second to the last picture posted, showing that stone fence. The stone fence reminds me of Ireland.

I should really use textures more often but I find that when I get involved with them I am lost in the process for hours. It eats up my time. Yours look wonderful and very 70's.

Really like the red barn against the blue sky with it's fluffy clouds.
I am sure some of my pics. would look better if I played around with them more, but I spend way to much time on the computer now.

What's new in our yard?

One small rose bush has sprouted red beauties in prolific fashion; I bought a yellow potted rosebush for the side porch; have red impatiens plant from Farmer's Market hanging; red and white impatiens are nodding heads all the way up either side of the front sidewalk; birds are chirping like crazy; Honey Cat likes spending lots of time outdoors; and everything is awesome to look at! Thanks for the question. Susan

congrats on the new computer!! it does make life easier, doesn't it?

lovely shots. I do love the sephia toned one

All of youpictures are so lovely. I think my favorite is the forth one from the top with the tree and the rock wall.
Hugs ♥♥♥

I am beginning to believe your New England neck of the woods is even prettier than mine...and mine is beautiful!

The second shot is my favorite but I really liked all of these, Sharon! You always find charming photos to share with us...thanks so much!

I love them all Sharon but that stone fence pulls at me!! I love that you have a list of happenings!
My bluebirds are on their second batch.
The Carolina Wrens started their second nest in a box in the "barn" instead of under the cover of the propane tank! (I think seven babies fledged out from there one evening! So many it was hard to count!!)
The crickets have been chirping for months!!!!!! That's CRAZY!
Too many things to list! Hope you have no more problems with the computer, glad you got that done!

Oh how I love those rock walls in New England! Very pretty pics of farm land :)

I'll always pick the photo's with Rock Walls in them...
My Favorites!!!

Beautifully done. Your Photo's Always delight Me...
In my old house that's what I used to do, Build Rock Walls...
I was able to build some in the condo I live in now, so I'm a happy camper. Just part of new England...

Always My Best To You
~Marilyn

I love the rock wall with the gate!
But they are all beautiful, thanks for sharing.

I cannot decide if I like the second or third one best Sharon. They are all fantastic. Those sunsets in the post below are absolutelt stunning!! Love them all!!

Phew, what a relief that you managed to get all your e-mail addresses back, that was very lucky. I keep on backing my stuff up for that just-in-case too.

They are all fabulous Sharon - but my fave is the 2nd one with the fence and trees on the right ~ and the beautiful tall grass. That one takes my breath away :)

My favorite photo is four.
Thanks for sharing.
Kiss
<:))

I love the photo of the rock wall. It has a timeless feel to it. Do you use PS for every shot you post? I am trying to figure out if I will never achieve the quality look I see on sites like yours without it!

Hi Sharon! I love them all but I especially like the second one with the fence running along the trees; I like the lighting.

My fave is the one with the close up of the stone wall. I have a love affair with New England stone walls--I like to imagine the farmers building them, the sheep grazing next to them, the deer jumping over them and on and on. Lovely post!

First of all, what a beautiful blue sky in that first photo
Contextual Ad Network India