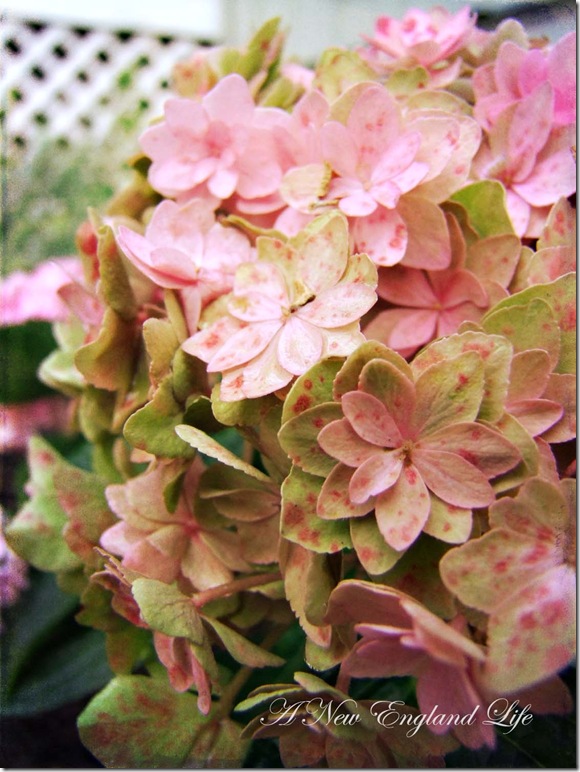 They’re called Forever & Ever ~ Together Hydrangea

I fell in love with the double flowers and multiple colors. Have you ever seen anything like them before? They were $11 each at Lowes so I brought home 7 to plant out in front of my house. My husband worked until almost 9:00 at night getting them all in the ground, while I trimmed the out-of-control Wisteria and Double-flowering Cherry tree.

It might be almost July but I think the garden if finally coming together. 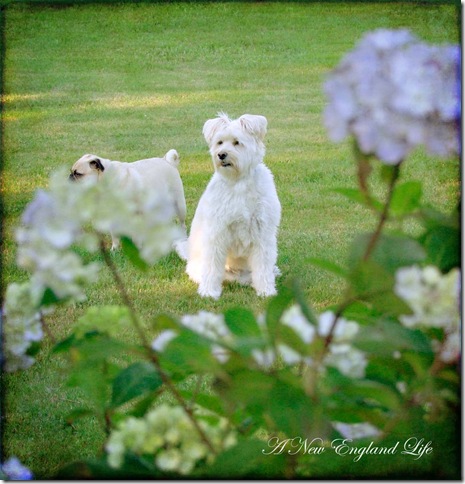 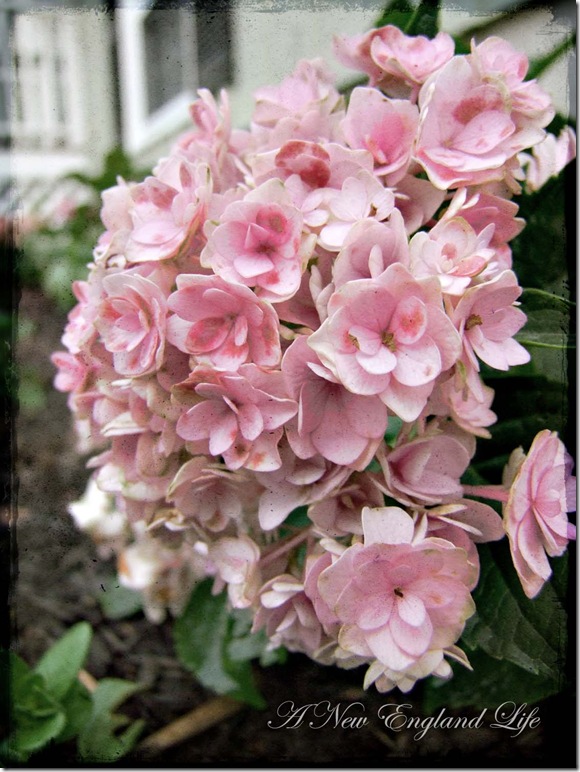 A somewhat rustic view of the new Hydrangea’s. Some flowers have more green than others. This particular flower was all pink, though they are all the same variety. Another thing I like about the Together Hydrangea is that it’s low growing. Only 25”.  high. Most are up around 36”, which won’t work for the low windows in the front of our house. 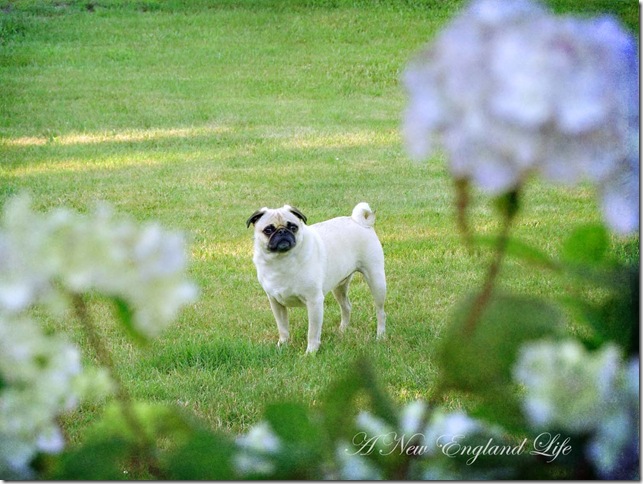 Winston! You better not pee on the new flowers!

and of course, beautiful shots.

Beautiful pastel colors, and the dogs just fit right in.

Handsome and Missy have peed on every bush, flower and tree in our yard! And Missy has been poo poo-ing on the sidewalk because sometimes she's just too lame in the legs to make it off the sidewalk in time.. my poor little girl.

Pee wherever you want, Winston! Life is too short.

Love the pinks and greens! And yes, Winston looks like he doesn't really care that you don't want him to pee on the new flowers!

Beautiful hydrangea's Sharon and Winston is asking you what you are talking about. :))

I've never seen anything like those! They're very unique! I bet they look beautiful in your yard!

Oooooo.... those are exquisite Sharon! I've never seen any like them. Can't wait to see the shot of all of them lined up and in bloom. :c) Sweet doggies too.

The hydrangeas are beautiful Sharon and those are the cutest pupper lawn ornaments you have there. Can't believe how clean and white Lily is! She is a cute girlie. And of course Winston is a handsome pup. No peeing on the flowers Winston!

I love hydrangeas--they remind me so much of New England summers. These are gorgeous! Here in the good ol' south I spend a lot of time watering my hydrangeas--worth it, but something to keep in mind if I want to add more to the garden. But you're tempting me here!

Beautiful hydrangeas.
Two cut dogs. Winston you better behave - Mom is going to get you! :-D

He probably IS guilty already. :)

I love, love, love hydrangeas. They're one of my very favorites. I have a hydrangea bush that came from my grandma's house when she died. She had two large ones that flanked her front porch for many years, and I have fond memories of picking them when I wasn't supposed to.

What unique flowers! I've never seen that color of hydrangea before.

Totally gorgeous, you were so smart to by 7!! They are a celebration of fireworks in themselves! The puppies are so darling. How is the kitty?
Gayle
San Diego

Amazing flower pictures, and the ones with the dogs in the flowers are wonderful too!

Those are absolutely beautiful! I so love hydrangeas! I've been following for awhile and would love to exchange links.

Random tidbit: In China, hydrangeas are called "sau kau faa", which means Wedding Bouquet Flowers. Because...can you guess? One little snip off the bush, and you have yourself a modest, prim little wedding bouquet! LOL

They're so beautiful... and so are your dogs! ♥

I love the pink.

and the pups are beautiful, too!

What unique blooms! Love the colors

I just LOVE those flowers! I'll have to tell my sister, Linda MARTHA STEWART, as I like to call her! She has a beautiful yard and is constantly buying flowers!

You, also have Lovely Lily in your family, only yours is the four-legged kind, but just as cute!