Well, almost. First I just wanted to throw in this one final image of Willey Pond that I left out of my Willey Pond post. 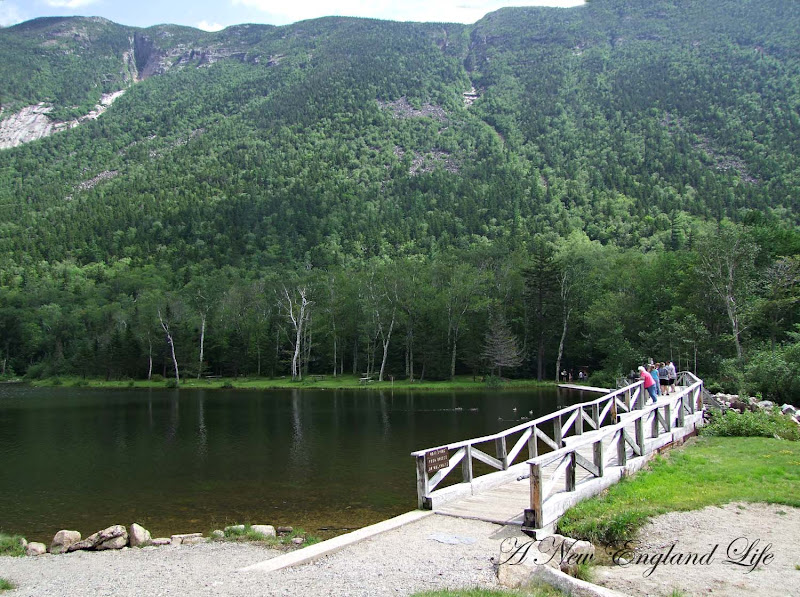 It was such a beautiful stop over. I do hope to get back again someday in the not to distant future. I'd especially love to go in the winter!

Now, onto the Mount Washington Hotel. 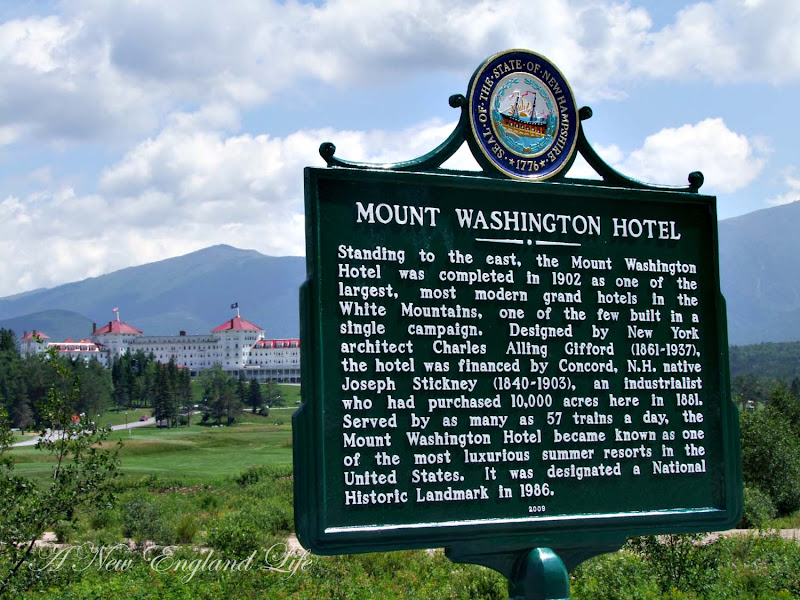 Because the Hotel is so historic (constructed from 1900-1902), and so beautiful, it has it's own scenic pull-off on the side of the road. The view is spectacular and while we were there a constant flow of visitors kept coming and going. It's also the place my niece's boyfriend proposed to her earlier this year. So sweet. The wedding is coming up soon, on September 4th! 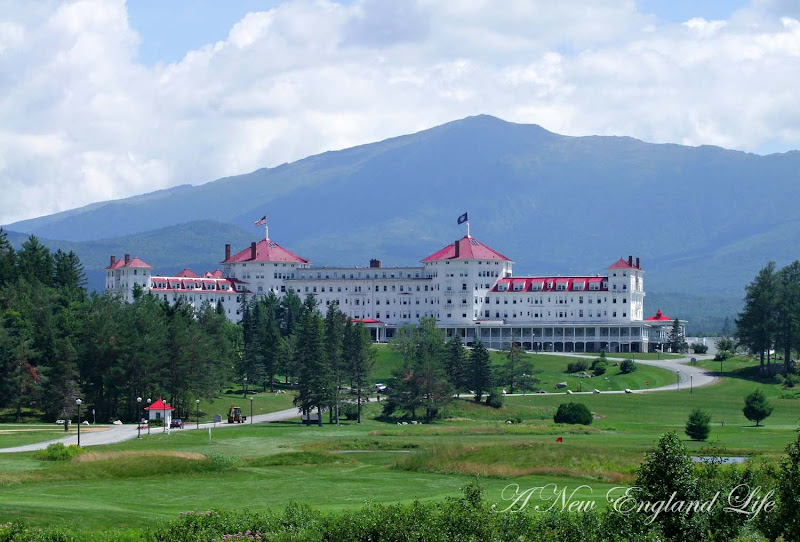 It would have been nice to drive up the long winding driveway to see the hotel up close but judging by the gatehouse I doubt they let us in without a purpose. 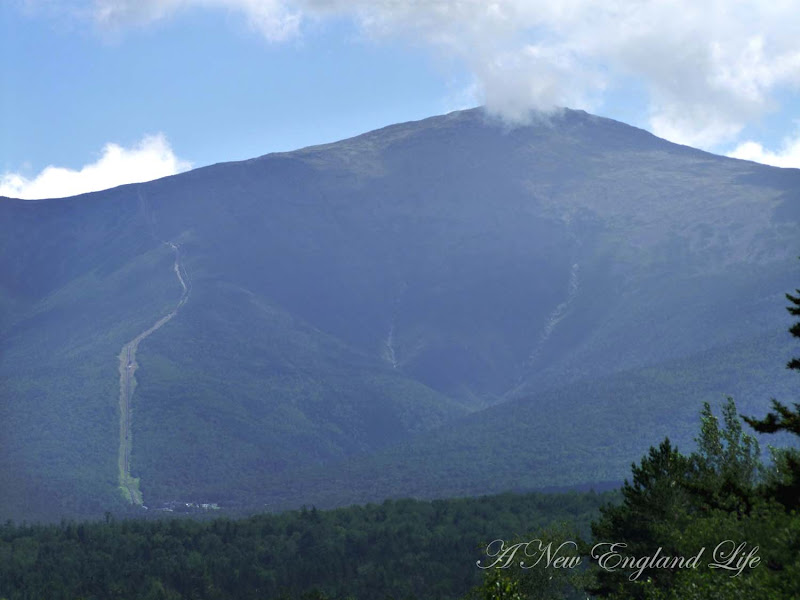 Of course the Mount Washington Hotel is named after the mountain that shadows it. In the above photo you can see where the Cog Railway goes all the way up to the summit. Have you ever been? I'd love to hear about it! As for us, no we didn't go. We didn't have much time left and you need to plan at least 3 hours round trip, plus being there a half an hour early.
Seeing as how I'm terrified of heights, and a big wimp ... lol ... somehow I doubt I'll ever make the trip. But I'll never say never! 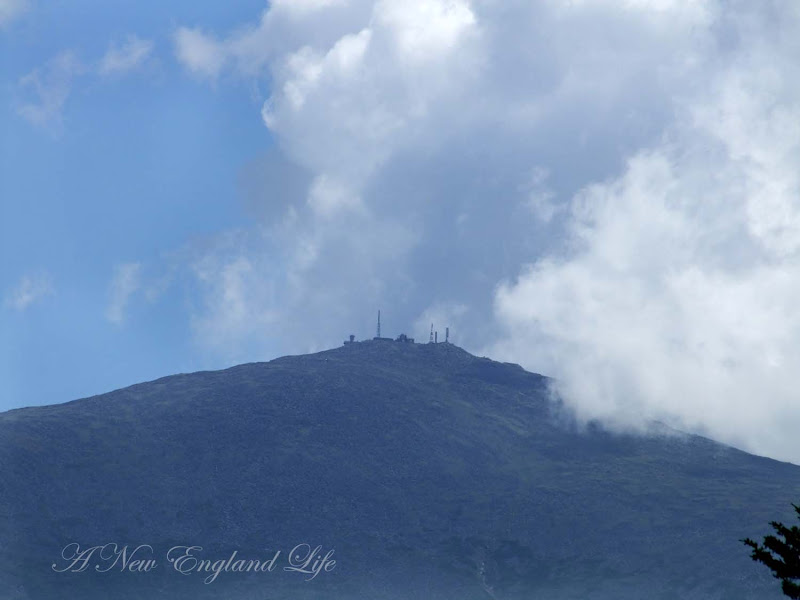 Here you can see a shot of the Mount Washington Observatory, which at 6,288 feet above sea level is the highest peak in the northeast. It's also where the Cog Railway takes you. The Cog's website has some wonderful scenic photo's if you're interested. They almost make you feel like you're right there on the train!
I feel very safe looking at the photos on their website ; )
Cog Railway 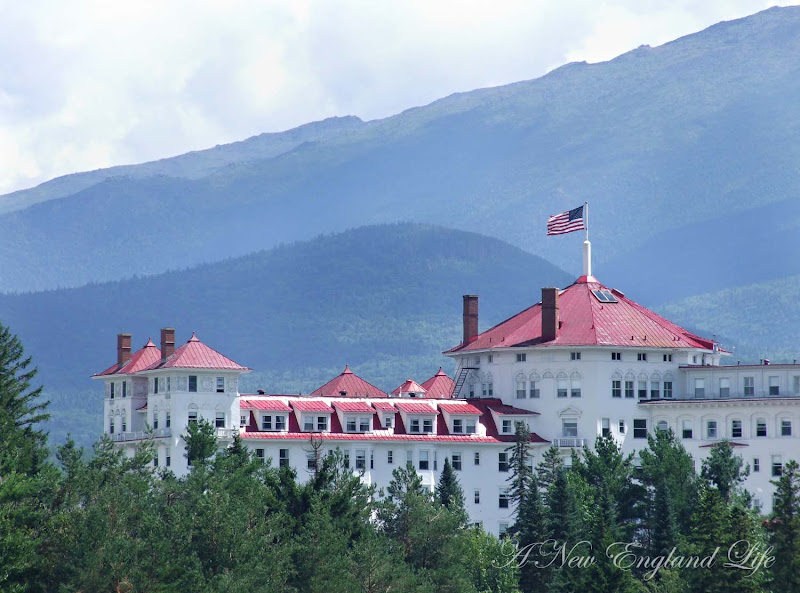 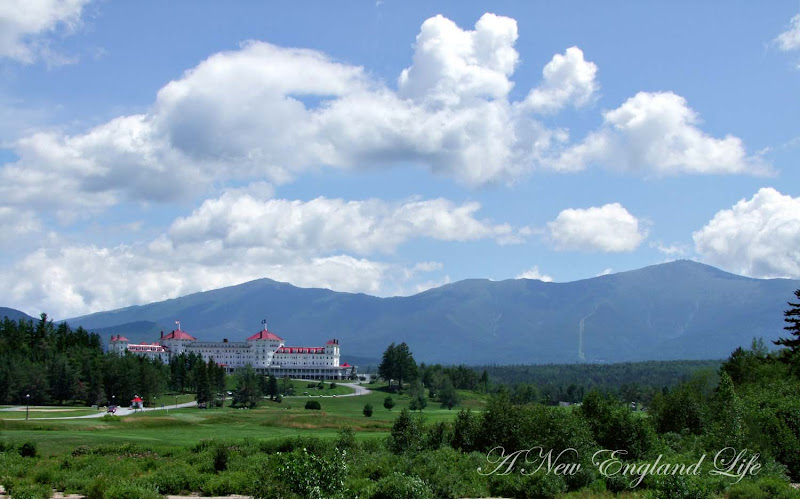 Maybe next time I come back it will be to stay a night, or two.

So I finished taking my photo's, got back in the car, turned the key .... and nothing. Absolutely nothing. The battery was as dead as can be. Although we told the girls we'd stop at a couple other places on the way back to North Conway, we couldn't. My husband was a little grumpy at this point (he hates asking someone for help or a jump start) and he just wanted to get someplace where we could buy a new battery. I knew there was a problem with it for a while but wasn't sure if it was the battery or the alternator. Luckily we weren't out in the middle of nowhere!
This week I'm joining Scenic Sunday for the first time. There's plenty of other links already posted if you'd like to pop on over!

Great pics! My husband and I went there a few years ago and we tried to drive our tiny Toyota Yaris up Mount Washington...well, we made it about 3/4 of the way up and as soon as the road turned to dirt and had absolutely nothing on the edges but a hige drop-off...we made a 20 point turn and got out of there! Needless to say, we didn't earn our 'We Climbed Mount Washington' sticker. Oh well. At least we're still alive.

Gotta love that creepy hotel from The Shining! :)

Came real close to going on the Cog Railway until my uncle said it backs down the mountain on the return trip. I didn't like that idea. Can't you just go to the hotel for a look around the place? We can do that at Disney World hotels down here. Just love your photos, I so wanna be there with my aunt and uncle right now.

Great photos, has been a few decades since last i was there, stirs the memory a bit :)

We stopped and looked at the cog railway on my first ever trip to the US 30 years ago, we were on our way up to Burlington so didn't really have time - it wasn't running that day anyway even if we'd wanted to take the ride!

Isn't Mount Washington part of the Appalachian Trail. Not sure but thought I saw a show about it recently on TV.

What a spectacular place. The first thing I thought of when I saw it was the movie Dirty Dancing - LOL!

Wow! That's quite a spectacular hotel! I can see why they'd have a special pull off section for people to take pictures, otherwise there would be plenty of accidents with people craning their necks to see this magnificent sight! Your pictures are gorgeous of course!

Linda - Behind My Red Door said...

DH and I rode the cog for the first time a few years ago even though I have been going to the White Mountains for over 40 years. I hate heights too but it was not at all scary to me surprisingly. We during the week in the fall so it wasn't as crowded and all adults in our car and it was quite peaceful. Give it a try sometime!

Wow, Sharon. That looks like a FABULOUS place. No, I've never been there but I'd sure like to go! Thanks for the gorgeous photos. Susan

WOW, what a place to be proposed to in... it's breathtaking!

Wow I was so taken with the cat I missed this beautiful hotel. Wow, wow. I would love to visit your area of the country.

WOW! what else can i say? this place is so WOW!

Breathtaking hotel in a gorgeous setting!! Wow! How is your car now?

As always, spectacular pictures!
I am not one for heights, either.
The hotel is grand...I would love to see the interior.
Thanks for taking us on the trip with you.

I've been wanting to stay at that hotel for a long time. Someday! The mountain is pretty amazing.

It's been years since my husband and I traveled in the White Mountains. The hotel is QUITE a site. Beautiful doesn't cover it. The rail trip was a tiny bit scary but not as bad as driving over the suspension bridge over the Royal Gorge in Colorado. Now that is super scary.

You got some spectacular photos of the hotel and the clouds. Just beautiful.