A few weeks ago, on a hot, late-summers afternoon, my husband and I finally visited a local restaurant I had been coveting for sometime now. Actually for about 2-3 years! 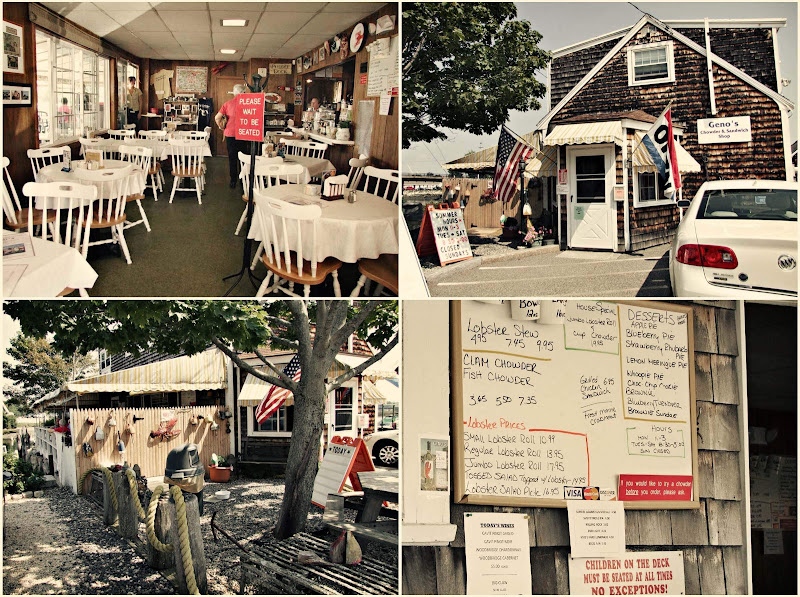 It's a cute, dreamy little worn down seafood shack that's been open since 1965. I mean, after 45 years of business how can you go wrong, right? 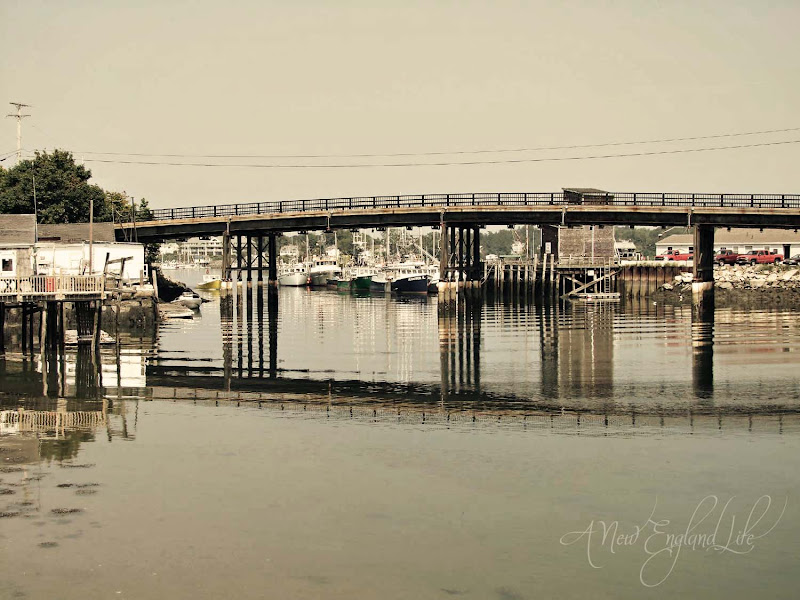 And the view, oh I love the view, even though my husband was less than impressed. I told him it's because he takes the view for granted, considering he's seen it a million times.

For lunch we both had Lobster rolls. Unfortunately they were not all we hoped for.

For dessert we decided to order some pie to perk up our taste buds. After all, the sign (top mosaic) says 'Baked Here' so we assumed they were homemade. Baked Here and Homemade are two different things.

Overall the meal was over priced meal and less than stellar. Sorry restaurant. The service however, was excellent. Our waitress was very pleasant. 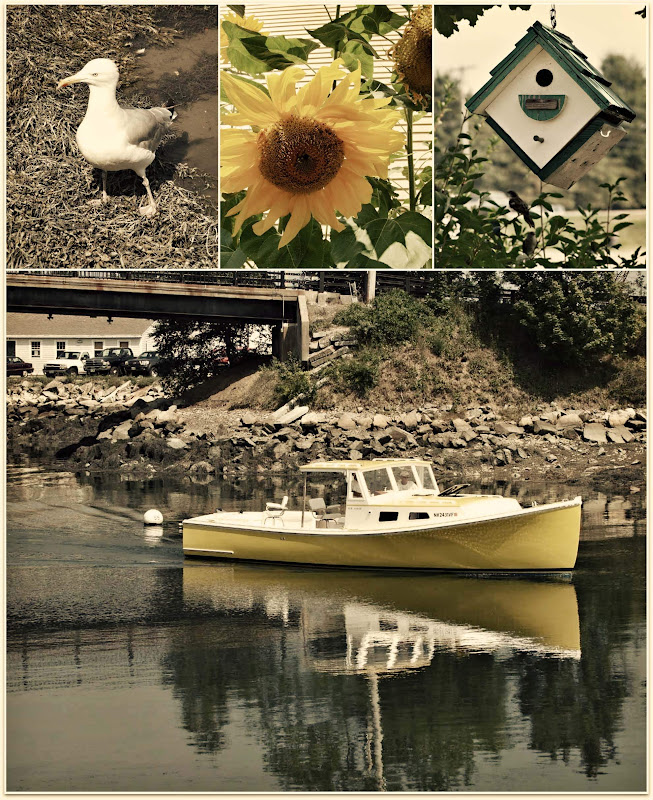 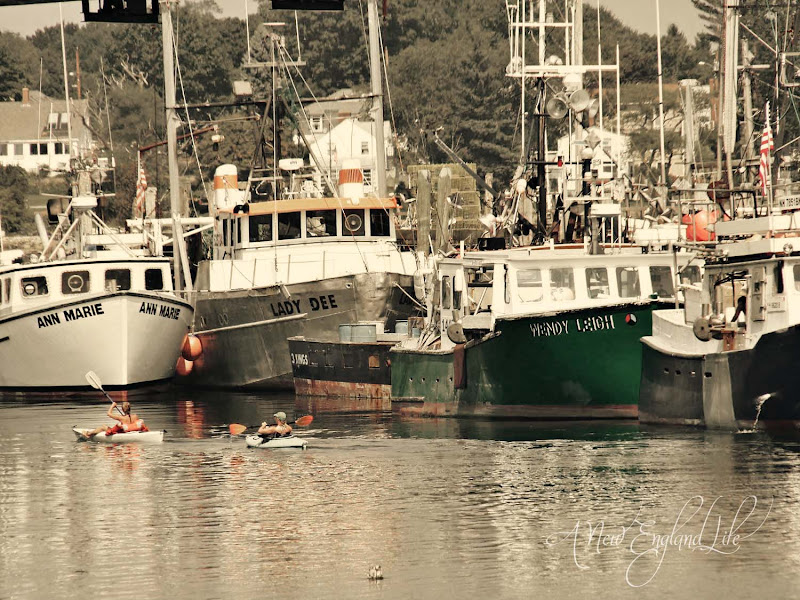 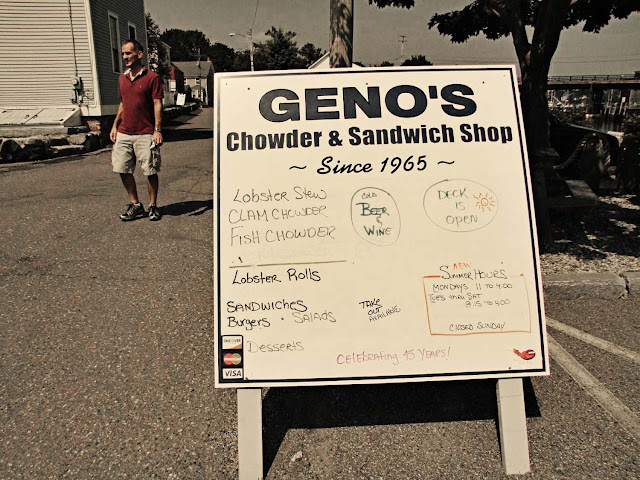 My husband, lurking in the background 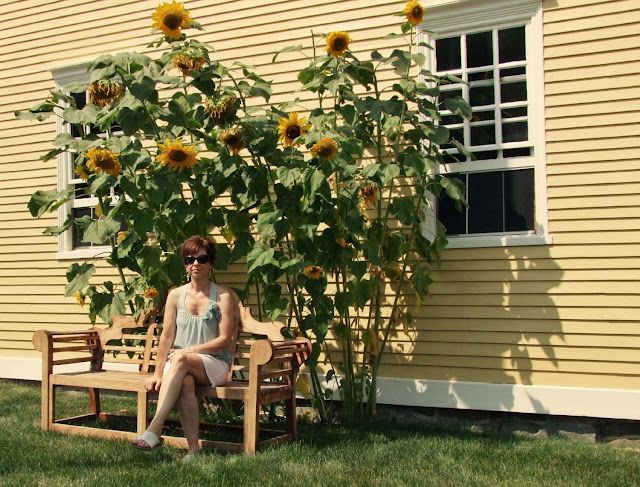 I realized after my husband took the picture that this was actually someones home. Some of these old colonials are open to tour, but this house if private. I'm sure I wasn't the first to sit on their bench though.

Man, was it hot that day, and at this point we were thinking about what's for dinner, still we had a nice time. Let's face it, as the kids get older almost any time alone is usually nice.

Oh, the view was great, Sharon! Too bad the food wasn't the same!

I wonder if anyone ever sticks their head out the window of that house and says hello to anyone who may be sitting on their bench... LOL

Sorry the food was not good. I sure don't like those kinds of surprises when we put out good money to eat at an establishment. I hope you mentioned the poor food to the waiter. I would have.

Sharon, it is logical to think that because a restaurant has been around for a long time the food should be good. I guess most of the time its true. Perhaps that place has survived on tourists who have no idea that they place offers such bad and overpriced food.

One of my favorite restaurants down here is called Arbetter's. They sell hotdogs and fries, that's it. The place looks like a shack too. Yet it has survived for many years as well. Michael Bolton used to work there when he was a kid.

The food is good AND cheap. I guess what I'm trying to say is that sometimes you just have to roll the dice and hope you get something good. At least you gave it a shot. I always say in life you have try things at least once. Take a risk. You might get lucky or not, but its interesting to find out.

Well that's a disappointment! Can you think of the price of the food as an admission charge for the view? Ha! Love the photos, though!

i'm with you gorgeous view and wonderful shots of you and the hubs.

sorry the food wasn't quite up to par

Sorry the food was a disappointment. At least you did have a great view - nice pictures.
Been to places like that. Go on someone's recommendation, then be disappointed in the food and over priced also. :(
Have a great week.
Hope your hand is better.

Where is that?! What a photogenic little place. Too bad the food was less than stellar... it stinks when that happens

I hate when that happens! Ones taste buds get all fired up and then get let down! That's when you need to go to the ice cream parlor or something like that!
I like that kind of scenery too!

Beautiful views and hopefully they made up for the less than stellar food. Those sunflowers were HUGE and yes, I am sure you are not the first to have sat on the bench. If I had been there, I sure would have! :) Great photos!

A Garden of Threads said...

Beautiful views, I guess the higher prices were for the view and the food. Too bad.

Well, at least you had the view, which I think was fabulous! ::Jill

I'm so sorry you were disappointed. Hmmm.

Well maybe the food was not great, but that view! thanks for sharing it with us, Sharon!

Oh, and I LOVE the shot of you and the sunflowers!!!

Sorry it was disappointing, but what a pretty view! and such a pretty house :)

Sorry your food was a dissapointment but with an AWESOME view like that, I could have eaten the napkins and been happy!!

I do understand, tho..I hate it when I have been wanting to see a good movie, finally go, and it's BLAH. Same with a good spot to eat.
Better luck next time..

Sadly, that is often the story with these prime locations...great view...food not so hot. Hope that the next time you get the chance to get away that it'll be a delight all the way around.

Beautiful pictures and wow what a view and the menu made me smile! I would love to find way there one day.

Gardening in a Sandbox said...

Beautiful photos and views. Too bad about the meal though.

Your photos were fabulous ... so sorry, after waiting for so long, that the restaurant wasn't as fabulous as you had hoped!

Well heck, that's disappointing, but like you said.. the view! I suppose that was worth mediocre food, that and being alone with your sweetie for the afternoon!

The views are beautiful. I'm sorry the food didn't live up to your expectations. La

What beautiful pictures. I plan to visit New England when my husband retires. Thanks for sharing. I enjoyed your post so much. Doylene

So "baked here" apparently means we bought frozen pies and put them in the oven? Hmm. I would have made the same mistake. Too bad the food didn't live up to the quality of service.

It's so disappointing when a restaurant doesn't quite measure up to expectations. Such a shame. The pie looked so yummy, too....

Too bad the food was so bad, because it sure does have everything else going for it, doesn't it? Loved your photo! You two are a handsome couple!