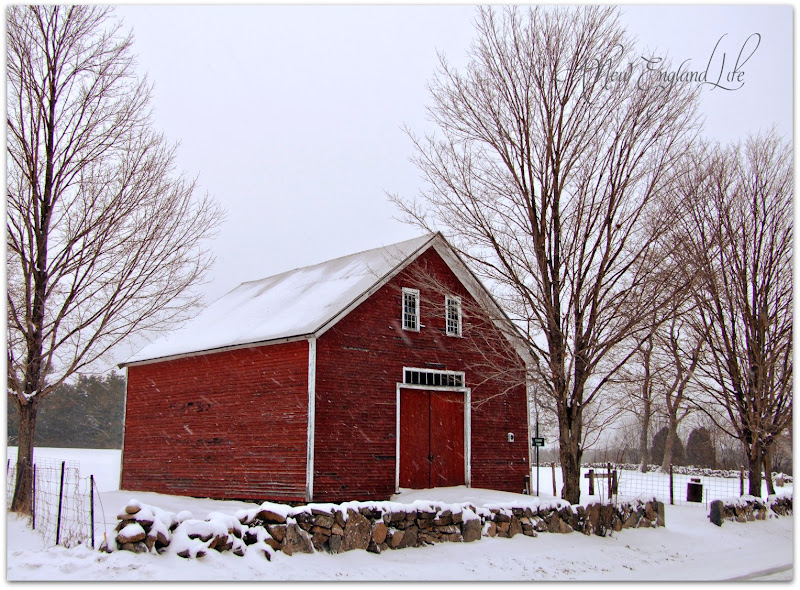 In the past month or so I've taken very few photos. My photography mojo has been lacking due to all that's been going on in my life. Soooo, these photos are from last winter! Not that it really matters, right? Good, because I have a lot more images from the past two winters. 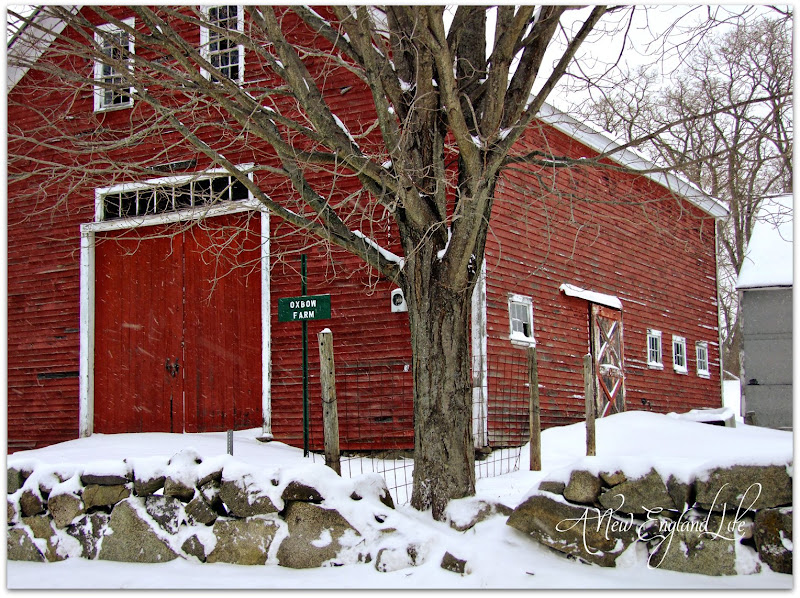 I had to take all these shots from my drivers seat as I stopped in, or on the side, of the road. No one has lived in the house for quite some time now so the driveway wasn't plowed. Not that I would EVER stop in someones driveway, get out and start shooting.

Just a week or so ago I drove by and noticed a SOLD sign out front. I do hope the new owners maintain the integrity of the farms history. 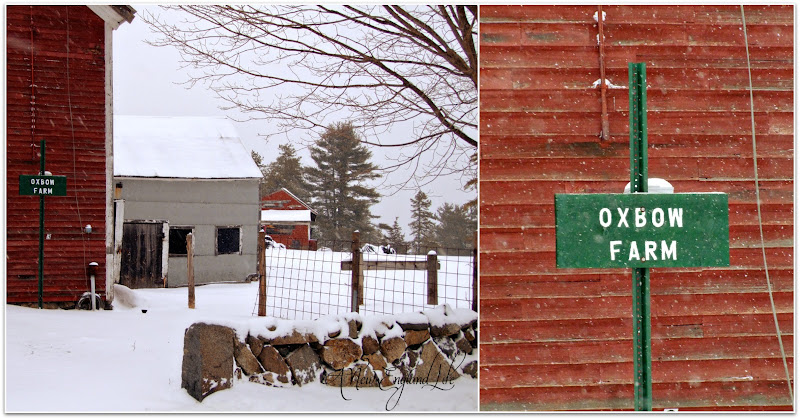 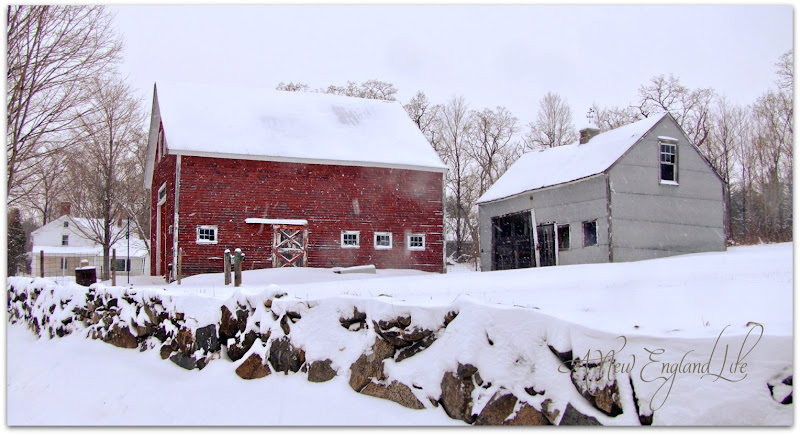 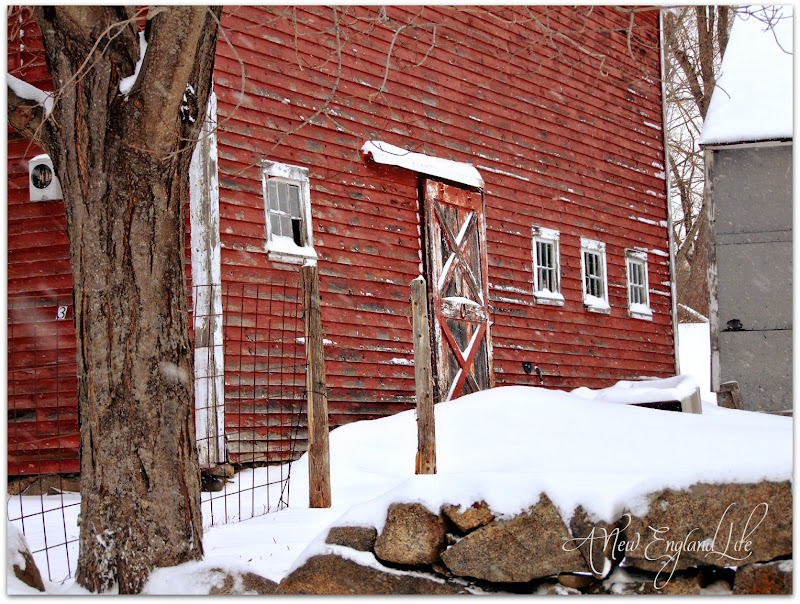 My two favorite shots, above and below. The red, the snow, the granite, the fence ... it's a perfect winters day. All we need are a few cows! Moooo!!! 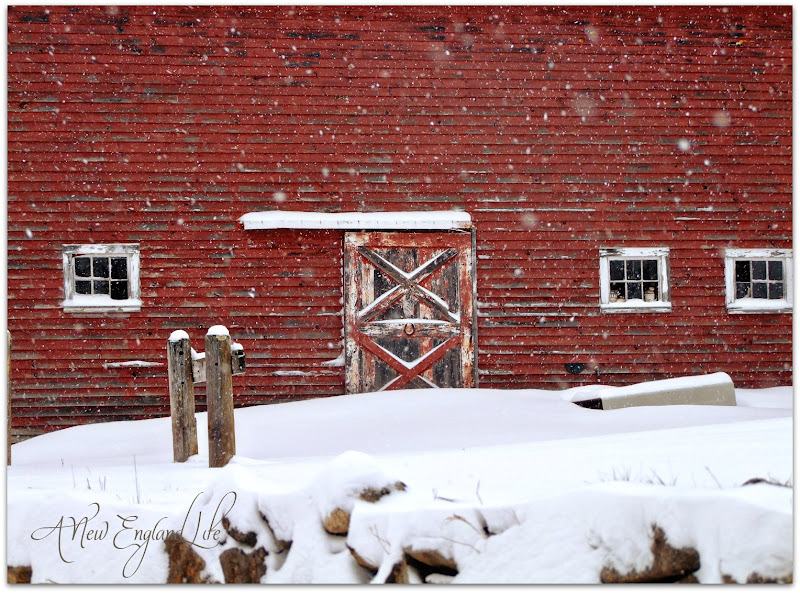 Don't you wish you lived in New England? Maybe just for a day ; )

* I just have to say thank you for all your previous comments and words of encouragement. As I said in my previous post, January has not been that kind. Last Wednesday, in the middle of a major snow storm, we took my older daughter to see an ENT (ear, nose, and throat specialist). This Thursday she will be having her tonsils out. They have been an issue in her mouth for at least a month now, but she has never had any pain which is the weirdest thing. After she has her tonsils removed the doctor is sending them for a biopsy to check for Lymphoma. He said it's a small chance, but it is a chance. We are thinking positive though!

So that's where my head it at right now. The drama never ends *sigh*

The Sweetest Days
Posted by A New England Life at 9:04 AM

I hate it when pesky snowflakes get on my lens and the last shot of the door is lovely :)

Thinking positive for your daughter!

This post is just georgeous. Love the Red Barn.
We dont have many left around here. Its mostly grain farming.

Yes, I'd love to live in New England again, but.....!!! Loved our years in MA, CT and NY! We still keep in touch with friends from there!

Can imagine the anxious thoughts filling your hearts! May God provide comfort to your spirit through His LOVE!

Oh Sharon, my heart aches for you and your daughter. You are both in my prayers and in my heart.
Your pictures are again just beautiful, your gifted photography and wording always leave me in awe of the beauty you capture. The red weather-beaten barns are so lovely in the snow.
Courage, my friend, courage.
Cindy

Oh goodness! Was she having any other signs of lymphoma that caused the doctor to have the biopsy done?

Sending just a ton of good thoughts your way, Sharon. Wishing for the best for you daughter.

Dearest Sharon, I am so sorry to hear about your daughter. I must tell you I will pray for her. It seems all I've been hearing of late is about cancer of some form or fashion. I've been blessed not to have any in my family for some time. Take care of your daughter and don't worry about your blog. I love just to go on and look at your beautiful blog regardless of whether you just posted. Carol

I will keep your daughter in my prayers. Hopefully it turns out to be nothing.
Love the pics of the red barn in the snow.
Glenda

Sending positive thoughts your way for your daughter. Everything will be fine! Head up! Love Oxbow farm and I, too, hope the new owners take good care with the farm. Your photography is stunning.

The pictures are great and yes we do wish we lived in New England just for a day or looooonger! Warm thoughts for your daughter and family.

Such beautiful pictures! And to answer your question, YES, I do wish I lived in New England... every day! :p

P.S.- My thoughts will be with your daughter ♥

My blessing thoughts for your daughter...I understand your concern. I had a friend who went through the same thing.Keeping her in my prayers. Balisha

Sending healthy thoughts along for your daughter. I actually just had mine out last monday at the age of 31... I'm sure it will be a much quicker recover for her! I've been eating a lot of smoothies, cream of wheat and mashed potatoes.

I hope everything's okay with your daughter ... my thoughts and prayers will be with you this week.

Sharon, absolutely lovely shots!
My thoughts and prayers are with you. Hope everything turns out fine.

It is worrysome when a farm is sold. Everyone hopes the new owners intentions are honorable.
I always think positive.

If you want to see some Vermont cows and barns, come visit:

Such a Talent NEEDS to be Celebrated...
Wishing your Oldest and you Well Thoughts and Prayers...Also Wishing you and much Happier February...
AND I'm happy To Live In New England!!

Thinking Of You...
~Marilyn

Oh dear, Sharon. You must be scared. What I have found with the medical world is that sometimes they make us worry for naught....they check and suspect and prod and then, in the end, all is okay. That has been my experience, anyway. So hang tight and get the tests done. Remember, too, "this, too, shall pass." My best to you and your precious daughter. Susan

Your pictures are lovely, as always. Taken this year or last...they are still your photos.

I hope your daughter's surgery goes well and you receive good news from the biopsy. Make sure she applies an ice collar. It will help with the pain and swelling. I am sending positive and healing thoughts her way. La

What gorgeous and scenic photos!
Brenda

best wishes for your daughter, and I hope your worries about her tonsils end soon.
beautiful beautiful barn!

Love your farm photos. And I do love living in New Emgland!

Will say a pray for your daughter and you!

Wonderful images my friend! I will be praying for your daughter and sending positive vibes your way!

i love red barns. there is a huge dairy barn in randolph center that i always loved as a kid. here's hoping your daughter will be ok...so very sorry she is experiencing difficulty with her health.

Such gorgeous contrast here with that red barn! Love it!

Why, I feel like I *visit* New England all the time when I come here my friend. :c)

Prayers will be ascending on Thursday. All will be well... I just feel it.

Red barns are my absolute favorites - especially with the snow! I will say a prayer for your daughter and will be thinking positive thoughts!

There's something about the color of "barn red" and snow!

A friend's daughter just had hers out. She's 22 and all is well. I am hoping for the same outcome for your girl. Oh, Sharon - it never ends, does it?!
Still, after all is said and done, your talent shines here. I would never have known you'd taken these beautiful shots from the window of a car. And there's just something about the red of a barn against the snow. In New England . . . * sigh *.

And yes! YES! I wish I lived in New England! Gorgeous photos - love the snowflakes against the red wood...xxx

Hello Sharon...I am praying that all will be all right for your daughter. God bless her .

Doesn't matter what year you take your photos....they are all amazing and I enjoy them so!

Thinking of you and your family.

I missed the post about your daughter. I'm sure everything will be fine. Sometimes I think doctors (and vets) can be alarmists. I have a friend whose son had chronic strep throat and you know how painful that is! He never showed any signs of strep - no pain, no fever - nothin'. So, I am chosing to think DD just has tonsils that need to be removed and that's all there is to it!

And yes, sometimes I do wish I lived in NE. Such a beautiful area.

Stunning photos. I love the drama of the bright red against the white snow.

Expecting the very best news about your daughter.

My heart goes out to you! You have enough to deal with!! I hope that February is more kind to you!! In the meantime, I do not remember this farm at all, so I enjoyed the tour!

I love the contrast of the red of the barn and the white of the snow in these pictures. How beautiful!
I'm hoping and praying that everything turns out well with your daughter. What a stressful wait!

Beautiful photos.I pray your daughter will be fine. I keep hearing that january has been a bit of a stressful month for many people, including myself. But hopefully things will start to look up soon.

Your photos are beautiful. I have done the same thing, taken pictures from my car, but I always manage to get some of the car in my shots!

I am thinking of you and your daughter. This must be a very hard time. I hope all goes well.

good morning. i just found your blog and it is amazing. your images are beautiful. i love new england. have really only been once, but i loved everything about and i can't wait to return. for now, i can visit your blog and feel like i am there.

Coming to you via Melanie's blog. Your photos are just incredible, I can already tell I'm going to like it here. I'm off to stalk your blog a bit.
Cheers~
T

Oh Sharon I hope the news is good about your daughter. I can see why you haven't had the mojo to take pictures so I so appreciate you taking the time to post.
I haven't been taken many myself just staying in mostly which is so not like me.
That farm is beautiful and so New England......and yes I am happy to be here for more then just a day.

I just found your beautiful blog today. I am ashamed to say that since it was earlier this morning when I discovered it and opened it but did not get a chance to read it until now, I cannot recall where I found the link.

I love red barns! I also love New England. I was born in Connecticut and have family there as well as family and friends in Maine, Vermont, Massachusetts and Rhode Island. Even though I love New England, I could not live there because of the cold but I certainly love to visit as often as possible. I am now firmly entrenched in the beach sand of Florida.

I am your newest follower and look forward to seeing more of New England through your eyes. I am sorry to hear about your daughter and I will keep her in my prayers.

I love your photos of the red barn. Lovely! and My prayers are with your family, especially your daughter.