I'm totally thrilled! A few days ago a pair of Bluebirds showed up on our back deck. Since the other birds eat there, they must have figured there would be food for them to eat too. 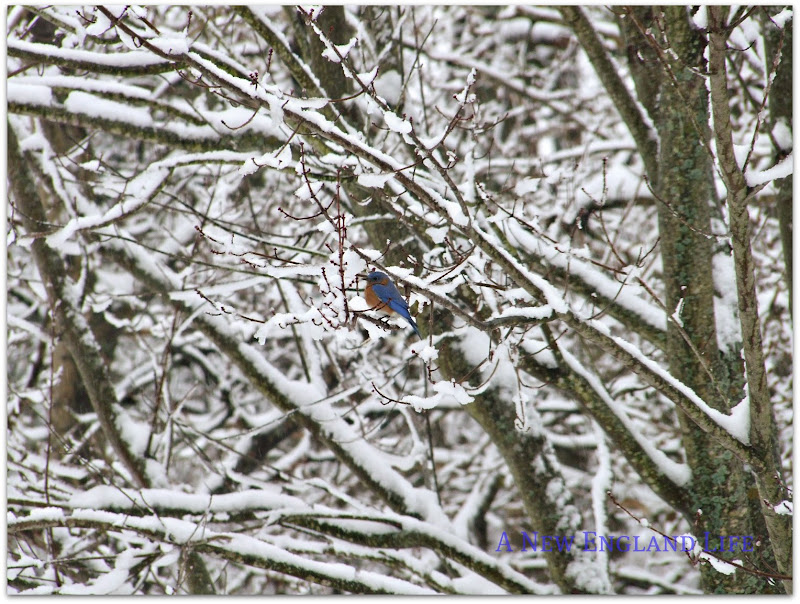 The next morning they were back again! I knew I had to do something to keep them hanging around, and do it quick. Zick Dough to the rescue!!!! I've never made it before but it only took me a few minutes to cook it up. Since I didn't have lard or chick starter, I used shortening and ground up peanuts. Since then I've made a new batch with lard, but I'm still using peanuts.

Needless to say they know a good thing when they see it. A Yellow Rumped Warbler (Butter Butt) has decided to join them. He too loves the Zick Dough! Unfortunately so do the Starlings. Argghhh!!! 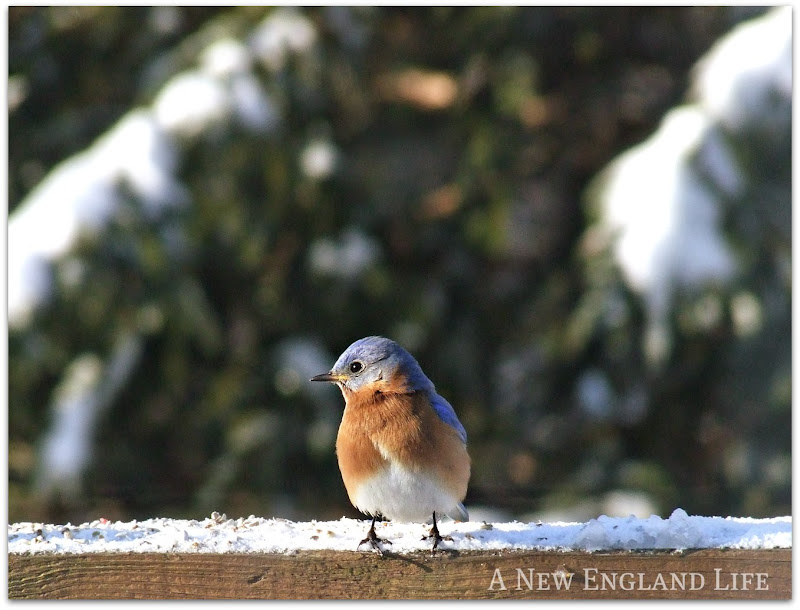 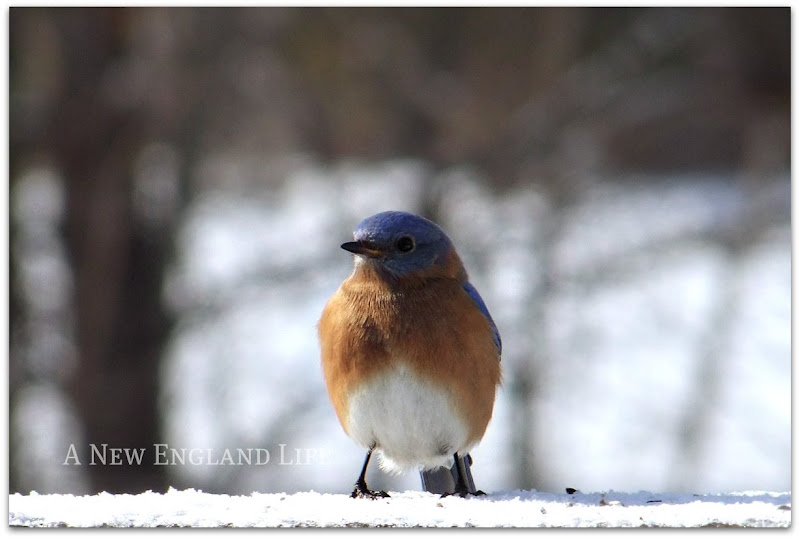 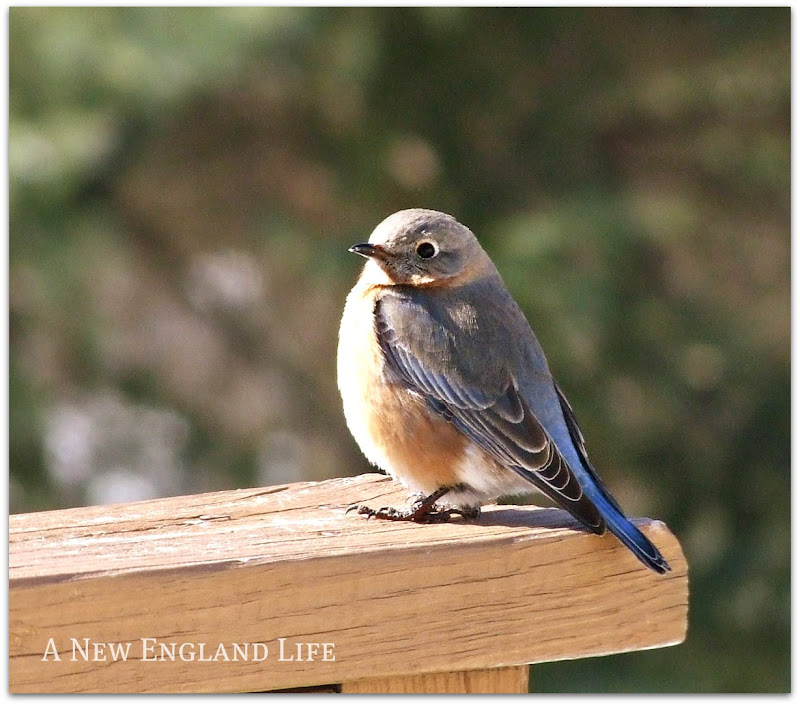 I think this is what drew them to my back deck in the first place, the peanut feeder. She eats off it but I've yet to see him on it. This morning there were 2 females eating peanuts at the same time! 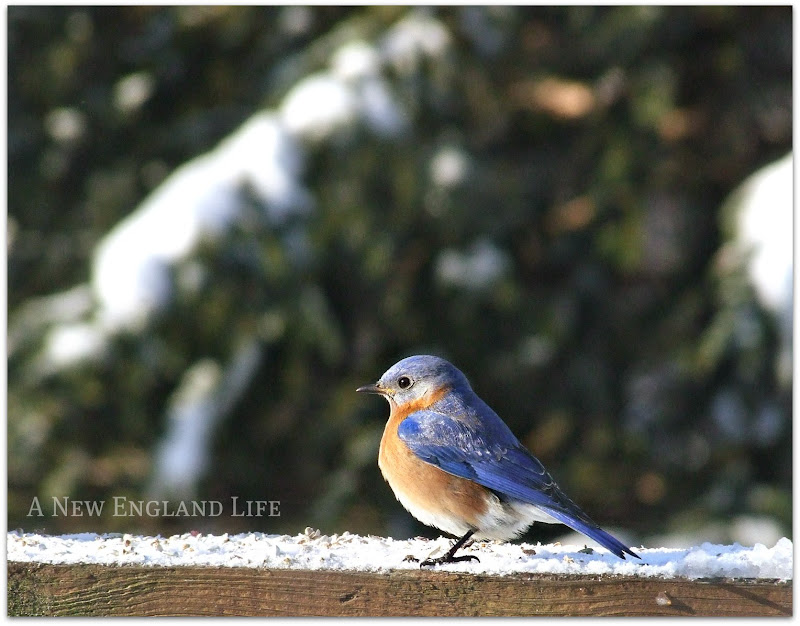 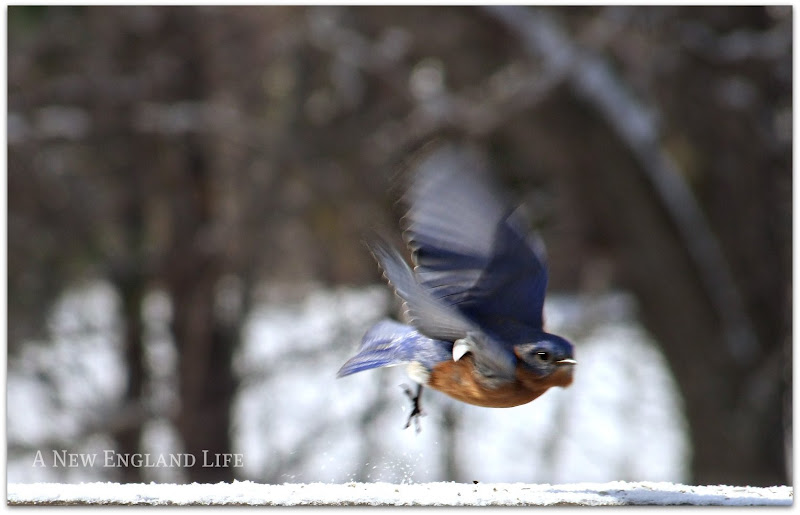 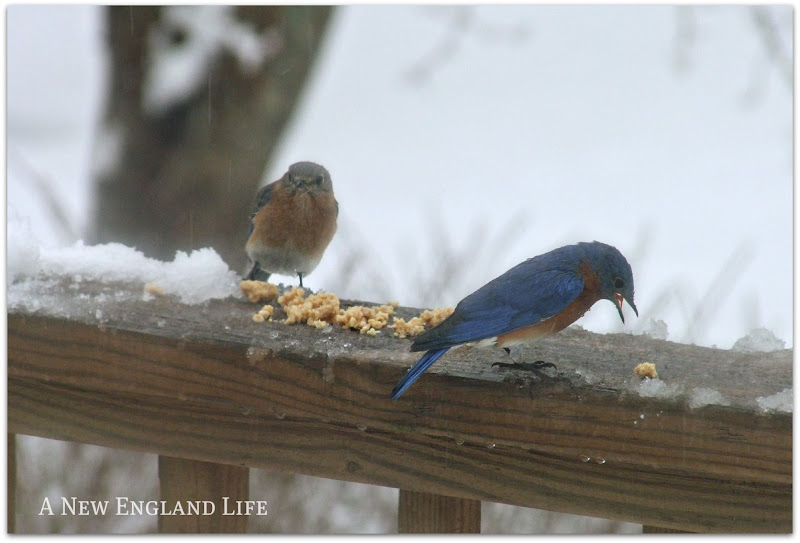 No matter the weather they keep coming back. Last night the Mrs. must have called up her girl friends because this morning there were 4 females all having breakfast together! Hopefully they'll stick around a while!

I love the first photo...that blue in the middle of all the white...
Happy you have those beauties visiting you! Now that you have made the zick dough you will have many more birds...it is crack for birds, at least that is what someone told me..:)

Oh I love bluebirds and yet I've not attempted to leave food out for them. I may have to do that. Love those images. They are fabulous. Carol

Splendid photos, Sharon. You got some real close-ups, too. I hope they are the bluebirds of happiness and will spread the wealth to you! Susan

These are exquisite photos - especially the first - all that white with a spot of blue!! Thanks for sharing these gorgeous photos!

I've been waiting for them to show up in our yard. I saw lots of them last fall so I know they're around.

ABSOLUTELY beautiful! Your shots leave me breathless...I have never seen such a brilliant blue! (I must not have as many pretty birds here- your captures are stunning:)

Beautiful! When I lived in NH, my neighbor always bought mealworms for the bluebirds, but maybe yours are vegetarians, lol.

What beautiful blue birds they are, too! Fabulous captures!

Sharon, that is just so special! I haven't seen a Bluebird since I was young. They are just so beautiful.
I have it on my list to find a Mountain Bluebird this summer. I have a couple of spots picked out.

Lovely shots. Including the ButterButt!

I love your shots!
These pictures are so suggestive... I'd like to make photos so beautiful!
Have a nice day
Mari

LOVE your bluebirds!!! I've never had them in my yard. I think it's too enclosed for them with all my trees and shrubs. What a joy to see them. Thanks so much for sharing them with us.
Cindy

I have never seen a bluebird before, thank you for the pleasure.
you have now introduced me to Red Cardinals and Bluebirds as well as stunning photography:)

Cooool! Can it really mean that spring will be here shortly?

Just beautiful! Last Sunday we had 8 bluebirds eating the holly berries from my winter arrangement! I couldn't believe it! I haven't seen them since, but I'm going to try your recipe! How can you tell the males from the females?

Oh, you are so lucky to have these beautiful Blue birds in your yard.
wonderful photos too.
My friend is able to keep hers year round. She feds them mealy worms year round and they even come to the window of her deck and hang onto the screen if she is late putting out their food.
Linda

What a beautiful series of photos!!! I also hope they stick around for a while!!!

These are beautiful, Sharon. Zick dough? I've got to try this.

They are all great pictures, but first one is my favorite. Hopefully they will stay around for you.
Flock of starlings came thru a few days ago making a lot of noise and a nasty mess on my patio.

The bluebirds of happiness. Quick thinking on your party Miss Sharon! hooray!! wow I love these photos. you have made my morning.

Well how about that? I know they are insect eaters and didn't realize they were picky eaters. No wonder I never see them at the feeders.

Thanks for the recipe. Now that I know about it, I'll be sure to make some!

OMG, those are stunning photographs! So beautiful and you're helping them stay warm during the cold weather, too. Bonus!

The ladies were having their "Girl" time!! How do you keep the squirrels away from the peanut feeder? This morning they knocked the sunflower seed feeder off the hook and sent it flying!!

My heart just ached at your beautiful photos (in a good way!). Just gorgeous photos of gorgeous birds. Lucky lucky you!

You have a knack for catching such awesome pictures of the birds, Sharon! LOVE these sweet bluebirds.

I went to the "Zick Dough" website and found it interesting that bluebirds can develop gout if they eat too much of it!

I heard some birds chirping this week for the first time in a while. I'm really looking forward to spring!

Bluebirds are one of my favorite birds, due to their shyness. It is always something special when you get to see them. Thank you for posting your pictures of them. Just helps to remind us that Spring is on its way.

The first bluebirds I've seen this season. I love these birds.

What gorgeous pictures you have. The pictures of Maine are so nice of the lighthouse, my husband and I visited there a few years ago. Most beautiful place.
I just started following your blog, and will now look around some more at some of the beauty you have captured.
Betsy

That first photo was just STUNNING...we don't see those birds here either, so it was double special to me..all the rest of the shots were wonderful too. Hope they stick around for you too so we can see more of these great photos!

That first photo was just STUNNING...we don't see those birds here either, so it was double special to me..all the rest of the shots were wonderful too. Hope they stick around for you too so we can see more of these great photos!

I hope they stick around for you. My husband built a bird feeder station, as I call it, and the birds are just beginning to notice it. I can only hope that my pictures will turn out half as good as yours! Keep them coming!

What a happy surprise for you!

Aren't they magnificent? Such beautiful creatures. And aren't you the fabulous bird mom with your home cooking? You are too sweet!

I bet they hang around for your home cooking for a long time.

Oh wow. What a lovely bit of colour. They make our robins look a little ordinary! x

Gorgeous photos! I love bluebirds and I know they're in my area -- but I've only seen them one time. I have a bluebird house but they have never even checked it out. I struggle to keep the house sparrows out of it until the tree sparrows arrive to claim it.

They're so pretty! Lovely photos.

Oh Sharon, I think this may be one of my favorite of all your posts (and that is saying something!). What absolutely magical and beautiful photos!!! Thank you for sharing your lovely visitors!
xoxo,
Mary

Oh, they are so beautiful! Look at all that colour. Love your photos ... :)

This is great Sharon! Thanks for the recipe. I hope they stay for you!

Amazing photograph. You must have so much patience.
I think your one of my fav stops.

I keep my bluebirds around in the winter by providing fresh water for them. They come every day and drink and bath.

We have many bluebird boxes on our property and have fledged quite a few offspring..I love them.

They also love the meal worms I buy at PetsMart.