My husband just woke up and came into the kitchen and said, "It's like Groundhog Day. Every day I wake up it's just the same"

What he means is that it's either raining or foggy every single day lately. Luckily Mother Nature gave us a reprieve for Easter, but besides that it's been rather miserable. Supposedly we will see temps in the mid 70's today with partial sunshine. One can only hope! Especially since the kids and my husband are on vacation.

In the meantime one has to work with what one has been given, so that's what I've been doing. Fog it is, again. 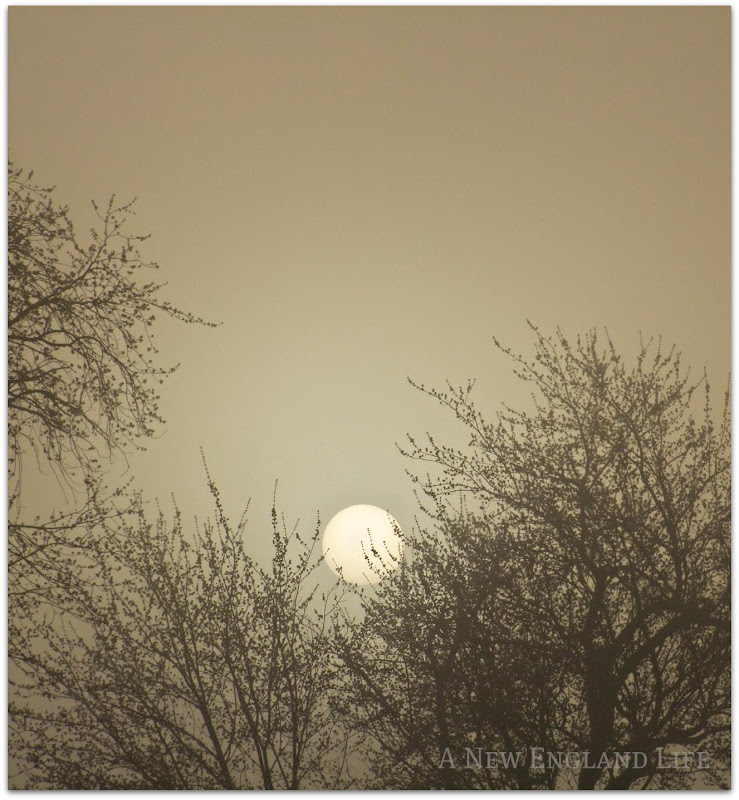 No, that's not the moon. It's the sun coming up through foggy clouds. Something you don't see to often. 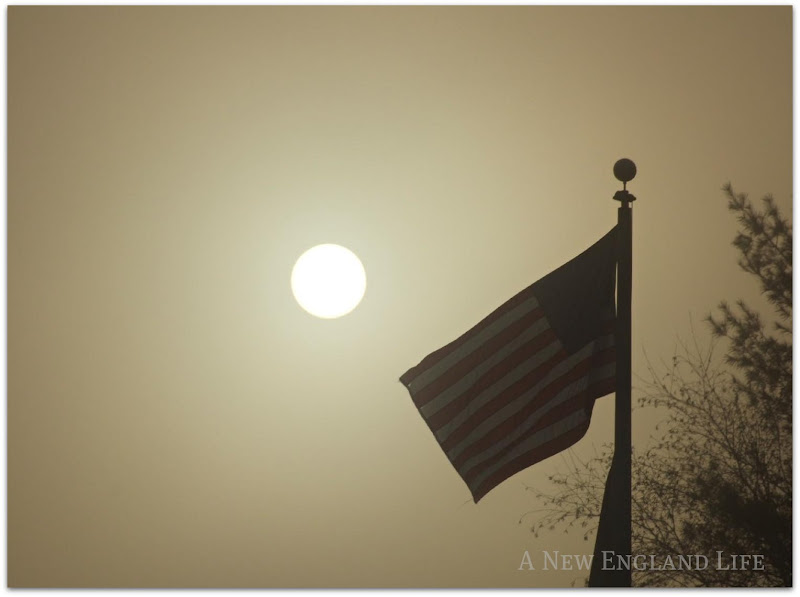 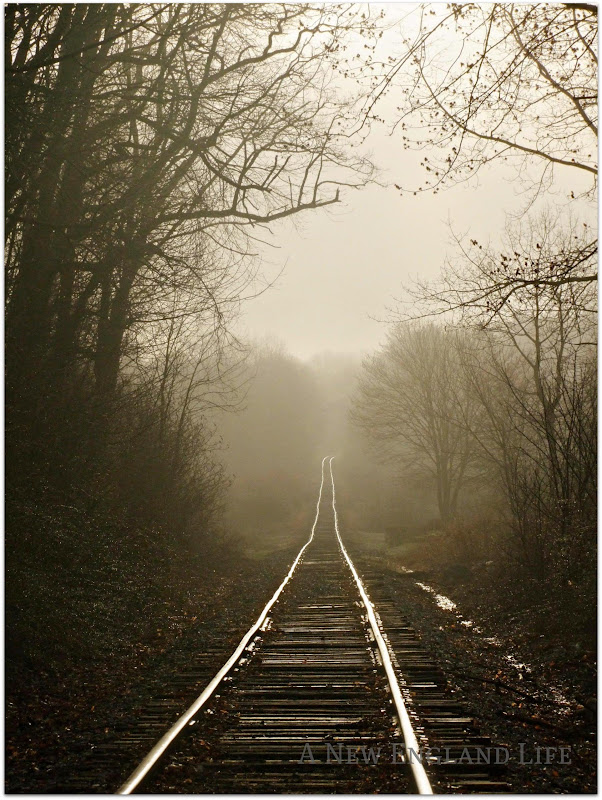 My husband loves this railroad shot. So much so that he asked me to print it so he can hang it in his office at work. He likes minimalism black and white so this image fits him perfectly. 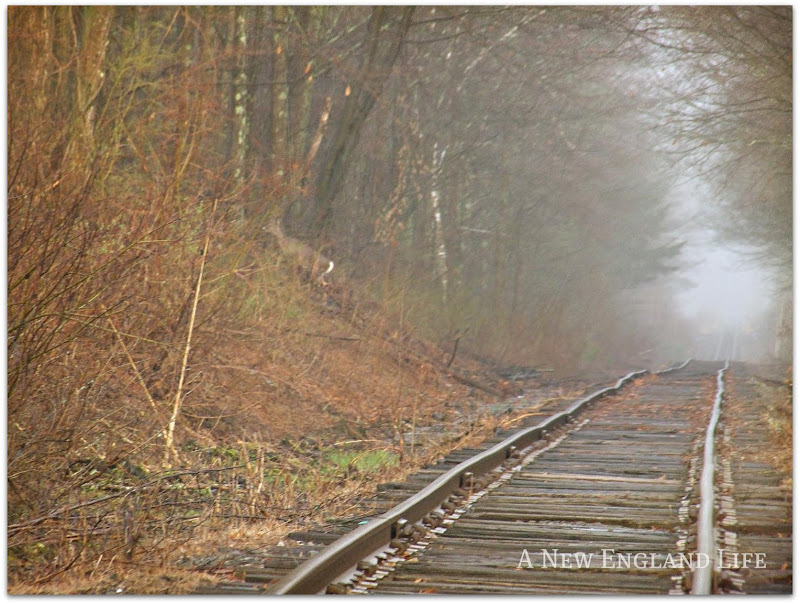 When I turned to look down the tracks going the other way there happened to be a deer standing right there! I quickly raised my camera and tried to get the shot (which is quite blurry) but the deer jumped and started heading up the embankment. See it on the left? I sat waiting because where there's one deer there has to be more. Nothing.

Down by the bay: maple bud and a bump on a log 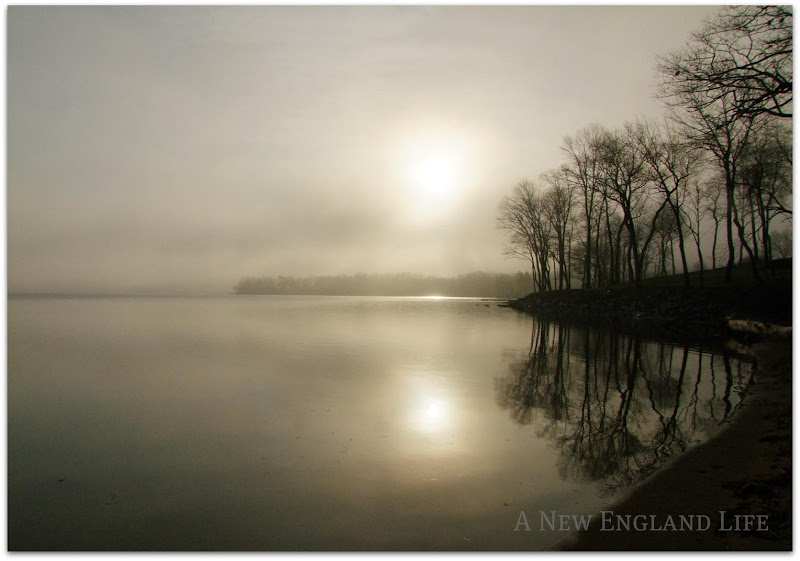 My husbands other favorite photo he wants printed for work. I have to say it was quite beautiful standing there looking out over the bay. I thought this photo almost had an Ansel Adams feel. Okay, not really, but kinda. Maybe? Just a little? 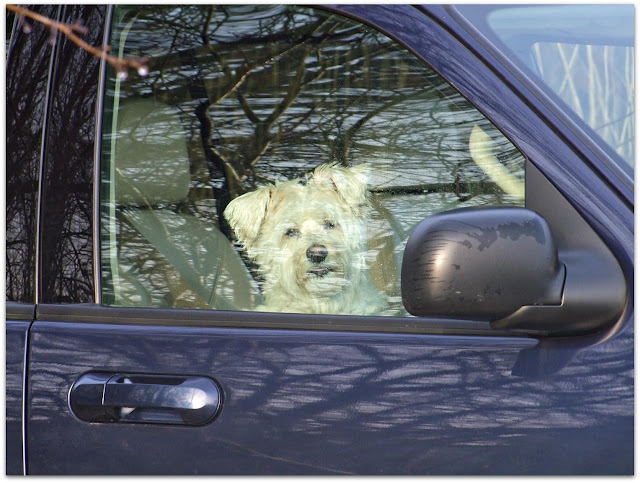 Lily, waiting rather impatiently. She does NOT like being left alone in the car but I had to bring her with me since it was 6:15 am when I left the house. If I leave her behind she'll bark her head off at me, waking everyone up. LOL!

Is it sunny where you are? If it is could you please send a little our way?
Posted by A New England Life at 8:13 AM

Oh, these pictures are wonderful. I love the railroad shot as well. We, in the midwest, are experiencing the same weather.The trees are so slow to leaf out this year...plants in the yard are way behind last year. What an unusual weather year. Balisha

definitely an ansel adams moment, that is my favorite. cloudy here today, but very warm. have fun on vaca!

No sun here :( No fog either, but cloudy and rainy every day. We're supposed to get some sun on Friday and Saturday and then back to rain for 3 days. Love your photos ~ as always.
Cindy

So sorry but no sun here either. Just storm clouds and tornado warnings and rain, rain, rain. I'm posting this week on my Monday afternoon trip to Bernheim where there was an occasional sun ray. Love these images. They are gorgeous. Love the tracks image and the bay image. Carol

Your photos are like spectacular paintings. The railroad shots are breathtaking. GREAT JOB! Susan

I can see why your husband likes those shots! They are both amazing. My favorite happens to be the one over the bay, though. Perfect stillness and the trees draw your eyes right to the sun. Such great composition. Sometimes its foggy days like that I love the most in terms of photography. Things look so different and mysterious!

It feels like Groundhog Day over here, too only of a "Same s**t, different day" kind.

Your husbands favourite photos are mine too. I love them both! Of course, the shot of Lily is also very endearing.

BTW...we had one stellar day of clear skies & warm weather - the first of the year - on Saturday. Since then, it's been heavy with gray skies, downpours of rain the likes of which we haven't seen in a long time, and an overall cold wintery feel. *sigh*

Such gorgeous pictures but it shouldn't be so foggy in spring!! x

It is sunny here and in the mid to upper 80's. I would love to send you some if you'll send us some rain, lol! We need rain bad!

I guess it's true what they say, "the grass is always greener..." It may reach the 90's today & I'm not happy. I'd give anything for some fog & rain. Your photos are just so beautiful & peaceful. Your husband has good taste, that railroad shot is wonderful.

No sun here. We have the same weather system you do right now and today it's cold. May is almost here and hopefully some sunshiney days will come too. Your photos are beautiful and I too love the same ones your hubby picked out. That railway one is beautiful! Enjoy your days off. Pamela

oh how I love fog!!! these are beautiful, Sharon. My two favorites are the ones that your husband likes... in fact, I would love to purchase a copy of the railroad shot. do you have an etsy shop?
xoxo

Both of those will look great framed.
No sun here to send your way.:( Storms for 3 days now - bad storms. They are saying they will clear out this evening, but flooding is a major problem now.

Your photography is marvelous!!!

Fog makes for lovely photo ops too, does it not? Mmmmmm yesssssss...

But you have to have the technique and camera, to do it justice. Which you have.

Beautiful photos! I love the bump on the log! Lily looks so cute sitting in the car. We've actually had sun for the past two days and it has been very warm, even staying mild at night, with some thunderstorms. Everything is really starting to grow...love this time of year.

I also love the railroad shot. It's been sunny here in southwest lower Michigan for the last two hours but the clouds are rolling in again.

Your hubby has great taste in photos.

We have sunshine right now, but it rained most of the day off and on... sort of sultry and uncomfortable. I love rain when it cools things down rather than steaming up my world..

Sharon, what a wonderful post! I love all the shots and in particular the ones your husband likes!
Our weather has been exactly like yours! Wet & gloomy! It's getting really old. It's absolutely pouring at the moment! I wish it would improve some.

I agree with your husband, Sharon - those shots are just stunning! Well done!!

The railroad shot is extraordinary! I would buy that in a gallery in a heartbeat. All the shots are really nice.

And yes, Ansel Adams for sure.

gorgeous shots - the reflection is stunning

Today we had sunshine but it was humid! Yuck, I really hate humid weather but I guess I shouldn't complain. Maybe I was just overdressed. I did not think it would be this warm so soon.

I love all of your shots and they do have a moonlike quality to them.
I love the moodiness to them. And how cute is that deer?

Good morning Sharon! I am wishing a string of sunny days your way but in the meantime I am loving the foggy shots. Desert living doesn't offer much of that so your photos were a special treat to me this AM.

These are hauntingly beautiful Sharon. They do have an ansel adams feel. Love the picture of LilyGirl!
xo

Wow! Never would have guessed that was the sun and not the moon. Very beautiful images. We are expecting hail and snow today... sorry can't send sun!

Stunning photos, you should sell your prints as cards! I agree with your husband, the weather has been dismal! Lily looks so cute waiting for her mommy to return!

Once again you've provided a photographic delight... and yes, that is very Ansel Adams like! Great shot. I also love the track shots, very nicely done!

I can see why your hubby wants those...they are so tranquil and sophisticated for an office! Loving the doggie through the car window. hehe. I love visiting NH in the summer...I would like to make some plans to head up there soon for some new scenery to shoot!

Love your photos and am so happy you're still blogging! Here in CNY, we've posted the wettest April on record -- after the sixth snowiest winter. It can only get better!

All the photos are beautiful, but I especially like that same ones that your hubby does, plus the RR tracks in color. I'd print them out too if I could!

Gorgeous photos, Sharon. Unfortunately I won't be able to join you. Dad has been in the hospital and rehab for a week and a half and I've been spending a lot of time with him lately. I hope you all have a great time!... Donna

I'm with your husband. Those two shots are amazing. I found that having it printed on fabric at spoonflower.com then framing it turns out beautifully. Better than trying to blow it up and print. If you have it done on linen-cotton on a fat quarter, it's a nice size. Did one of my grands.

Amazing photos, I agree with your husband, the railway shots are fabulous. I do see then Ansel Adams influence.

Thank you for the pleasure.

Fantastic, as usual! I love the same ones as your husband and can definitely see the Ansel Adams look to the one by the bay.

Exquisite. I adore the fog. Your husband choice is stunning.
This is my third try here today. Im on a new comp and having issues. :)
Love your view as always.

Easter was foggy and drippy in CA. We drove 3 hrs to inlaws and enjoy family gathering. Same weather.
Today was beautiful, got up to 87 outside. I opened all the windows so the house could have some fresh air.
Hope your day today was just as nice...K

Love your fog pics, absolutely gorgeous. Here in Ohio the weather is just plain crummy,gray and rainy, can't get outside to do any planting. I have cabin fever.

Hi Sharon... I've missed your beautiful images and visiting New England. Thanks for your friendship.

Oh, Sharon. Yes, that photo absolutely does have an Ansel Adams feel about it. All of these are beautiful, although I'm sorry to hear about your hum-drum weather. Yesterday was beautiful here when we arrived home in the afternoon. Today - not so much. Missed you!

Sharon, these are incredible images – the third one with the light on the tracks is brilliant. I hope you got some sunshine today – we did finally and it was glorious!! – g

One thing it does is it makes for some great photos. Great captures Sharon!

Gosh! I love that picture of the rail tracks disappearing into the distance too. Do you sell any of your work? I would seriously love to buy a copy of this.

I think we may have stolen your weather over here in England. It's bright and sunny and we've only had the tiniest spot of rain in something like 6 weeks. The ground is parched and half the North is currently on fire due to the gorse being so dry. It's very odd. Not complaining though. I have broken out the summer dresses 2 months early!

Oh, also really love your Instagram pics - I love that app too, and Hipstamatic. I have an iphoneography blog full of pictures snapped on my iphone.

I agree with your husband - those two are the pick of the litter!