Snow, birds, and bit of drama

Yesterday afternoon the snow began to fall. Something we haven't seen much of this winter, and I'd kind of hoped we wouldn't see again! But, it's New England and there's no telling what's next. 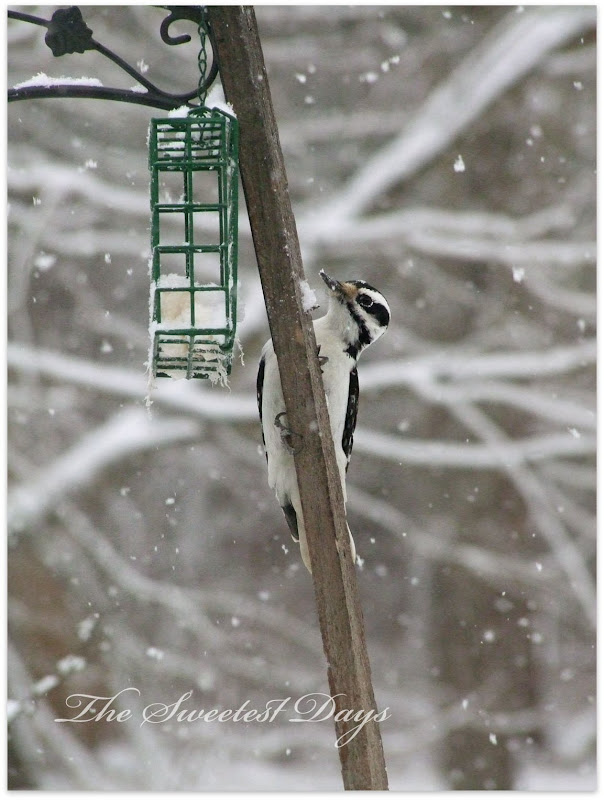 Although it doesn't really look big enough, this is actually a Hairy Woodpecker. Photographing them can be tricky since they are much more timid than the Downy Woodpeckers.  Such a pretty lady she is. 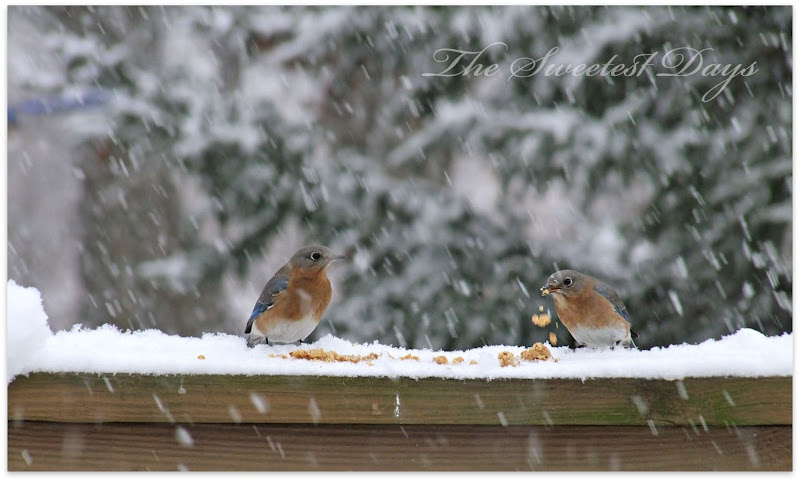 Gotta love the Bluebirds! They've been eating up the Zick Dough for a the past month. Lately they've also been fighting like cats and dogs but once the snow arrived, so did harmony.
As for the drama portion of this post ... Tuesday my husband and daughter, Elise, went skiing. While on a black diamond my husband stopped to see where my daughter was. Turns out she was right behind him going almost 40 mph (we know this from the Ski Tracks app my daughter has on her phone). All my husband remembers after that is seeing pink before my daughter hit him full force, causing her to go flying through the air and land on her head (with a helmet) and shoulders we believe. Instantly my husband ran to her and took her down to see the medics who determined she was okay, but they still rested for a bit in the lodge and had something to eat before continuing to ski for a few more hours. Ya, I know : /
By Tuesday night Elise felt sick to her stomach and had a terrible headache but no vomiting or other concussion symptoms. Finally she ate a little yogurt and some toast and which calmed her stomach but yesterday morning when she awoke her neck was really hurting ... bad. Unfortunately I had to go to work so I called the doctor from my cell and they said go straight to the ER. Since I wasn't home my husband took her where they x-rayed Elise's neck only to have it come back with what appeared to be a line through the 3rd vertebrae. The doctor assumed it was a shadow from the trachea but he couldn't be certain so a CT Scan was ordered. Long story short (and maybe it's a bit late for that) Elise is okay. Nothing is broken but she has to wear a neck brace as there is plenty of swelling, soreness, and stiffness. Needless to say my husband is quite sore too. All will be well in the next few days though. Phew!
And if that wasn't enough, in the midst of the ER drama my older daughter texted me and said her boyfriend messed with her fish tank and killed all her fish. And she doesn't buy cheap fish! *sigh* 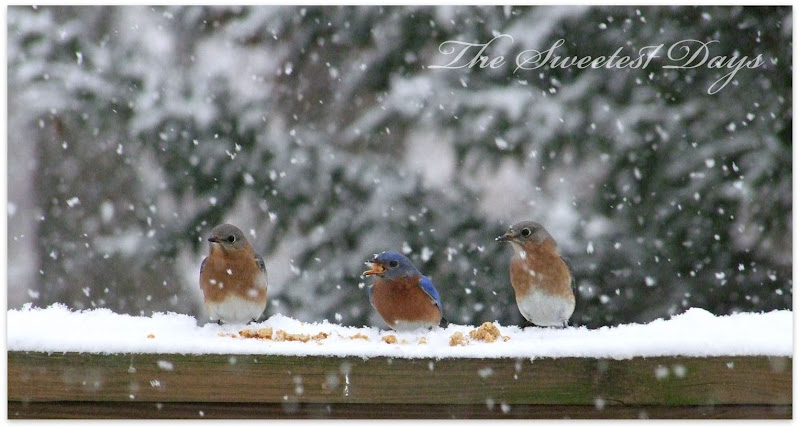 Despite everything going on in the teenage world the Bluebirds seem quite content to have a little something to eat on a cold day. As was I when we went out for dinner at Petey's last night ; )
Posted by A New England Life at 8:38 AM

Sharon, these photos of the Hairy and Bluebirds in the snow are so beautiful!

Oh my, I'm glad everyone is okay. What a scary time for you all as it could have been so much worse. I love the little bluebirds photos. They are so cute. Enjoy the snow. Pamela

Oh those action sports. They can be tricky. So glad all is well. Those bluebirds, so sweet. Carol

Oh Sharon, I'm so glad that they are both OK. I've never been skiing... Frankly, it scares the heck out of me. My daughter and her friends had planned to go to Hunter Mt. this weekend, but decided that the weather would be too warm. I'm happy, because she has never skied before, and I had visions of something similar happening to her. But I guess I can't keep her in cotton wool forever...

I LOVE the photos in this post! I would love to attract some bluebirds... I see them a lot in the park near my home...
xoxo

Only one of the reasons I have always feared learning to ski. Just glad that your loved ones are okay and in healing mode from their mishap. As for the fish... *sigh*

Aren't bluebirds just the sweetest birds? We have quite a few that visit our feeder and flit about the yard. You captured them so nicely. :-)

What beautiful pictures!
Here, this winter it snowed so much ... but now it seems to spring
I'm sorry for your daughter ... I hope you get well soon
xoxo
Mari

That is drama! So glad to hear your husband and daughter will be OK, and sorry about the fish! I know they can be very expensive, and it is so hard to lose them at any cost.

Sharon, so glad to hear that everyone is okay! It must have been a very stressful event.
I love your images in this post! Very pretty.
Funny it snowed here yesterday too! Quite unusual for this time of year. Hopefully this is the last time, but we can't really complain because it's been a super mild winter!

Oh my gosh, Sharon! I'm so thankful they are both okay - very scary.

I do so much love your photos.

Then, when I read the ending and saw that you went out to dinner, well, I felt better. You are a woman after my own heart!!!

And I LOVE the bluebirds.

New England will always be with me because I have your wonderful photos to peruse anytime I want to. It truly is a gift. Thanks.

Yowza! I'm glad that there is harmony at the feeder and that your family is A-okay.

I'm glad to hear your husband and daughter are okay...that sounds scary. I love the birdy photos :)

Oh, my gosh. That really IS some drama! But I'm glad to hear that everyone is ok. Even the bluebirds ~

These bird pictures brought an "AWwwww" out of me! I love the blue birds! I don't think we have them here this time of year. Hope your daughter can replace the fish. They are captivating to watch. But, most of all, I am glad to hear your hubby and Elise will be okay. Head injuries....I guess we can not be too careful.

I knew there was a reason I don't ski! That must have been incredibly stressful for everyone! So glad to hear it all turned out well in the end. The bluebirds are really lovely.

Glad they both will be ok. I don't ski - never wanted to, as to afraid.
Great pics of the birds and snow. We have lots of blue jays, but I rarely see a blue bird around here.

Sounds like a scary accident, I am glad Elise is OK. AND Oh yes, I love the bluebirds.