Thank goodness for the time change. Finally I am able to get up and out the door in time to catch the sunrise!

Since the sky was cloudy when I awoke I didn't really rush, thinking there would be no sun anyway. Thankfully I arrived at the waters edge just in time. 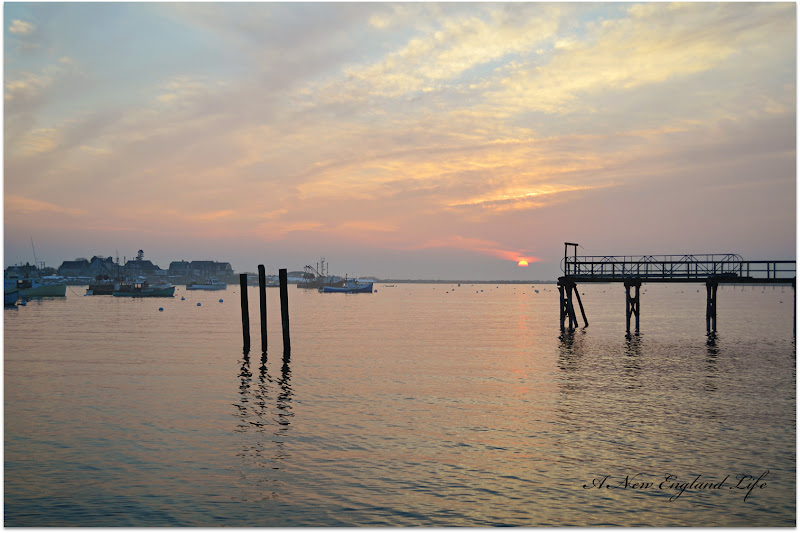 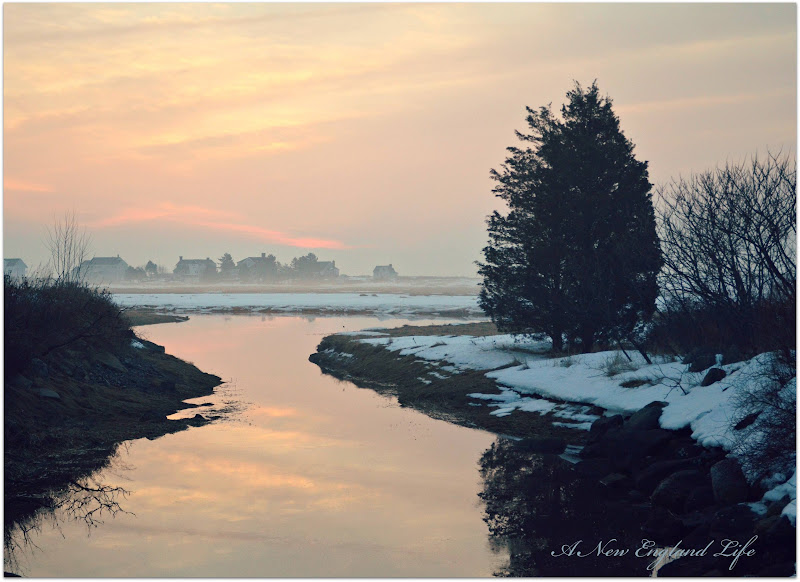 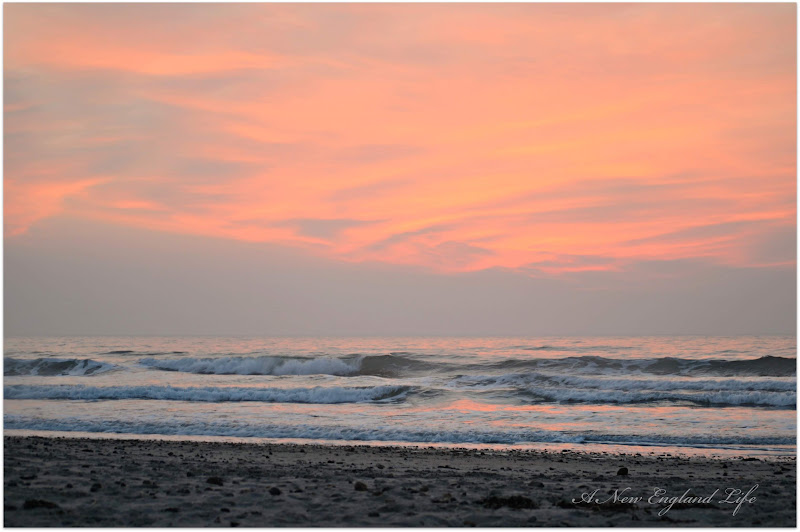 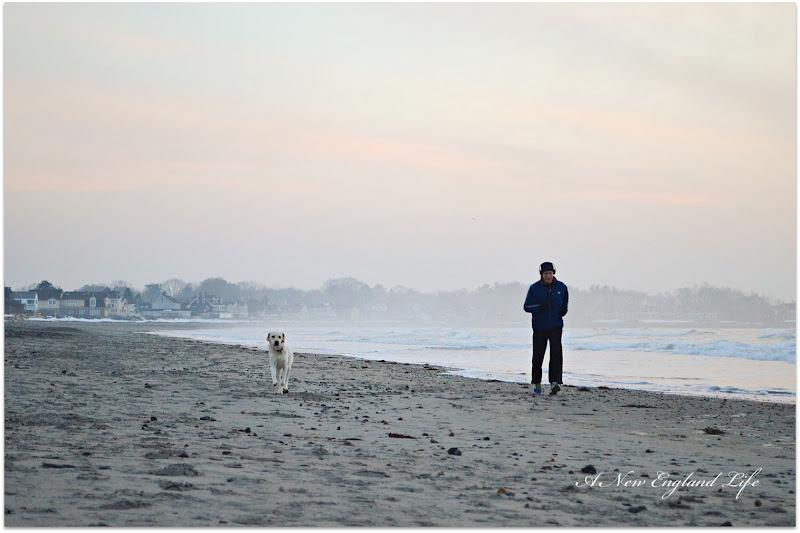 What a great way to start the day! The air was pretty mild compared to what it has been. Eventually reaching the low 50's. 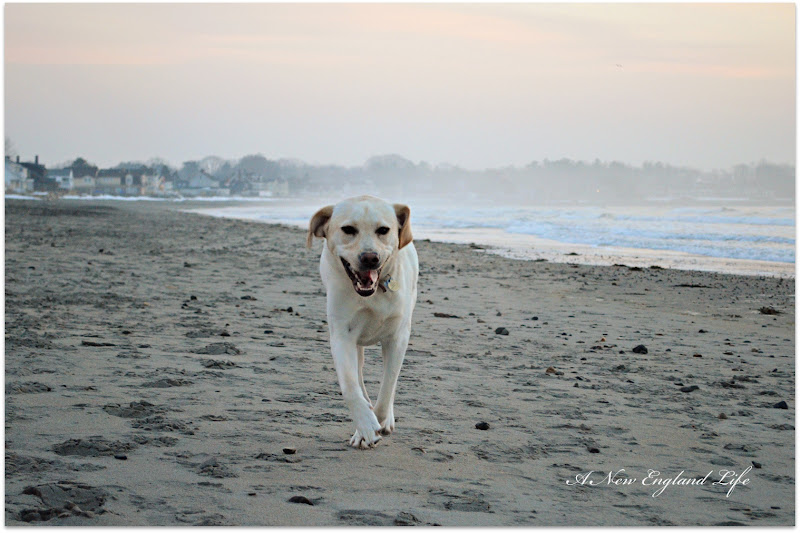 A total sweetheart. All she wanted to do was love on me. 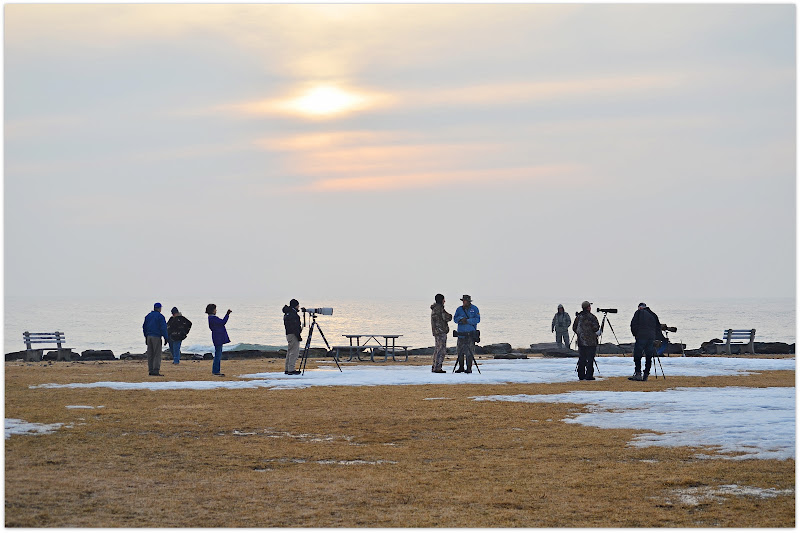 After a few pictures at Jenness Beach and Rye Harbor I thought it would be nice to check in on the local resident Snowy Owl. Uh yeah, I think she's still here ... 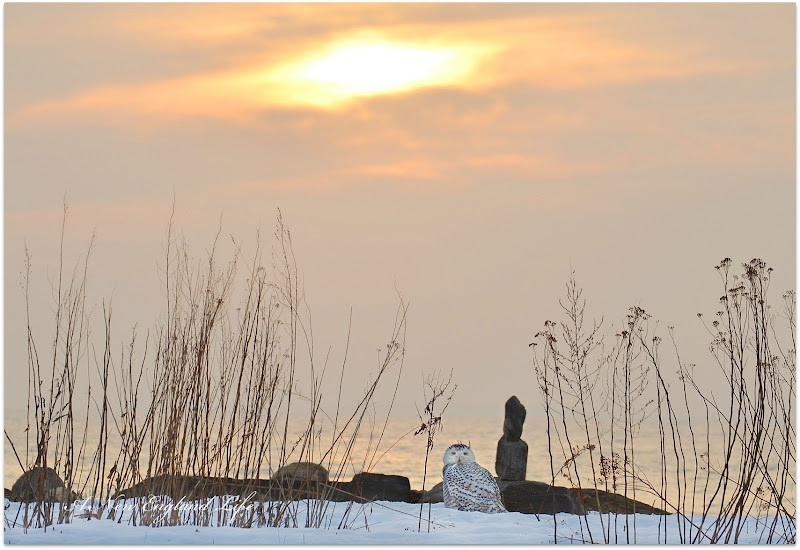 Sometimes I wonder who's watching who. She seems quite oblivious to all the local paparazzi that visit on a daily basis. Every time I stop by people seem to be giving her a wide berth so as not to cause any stress. 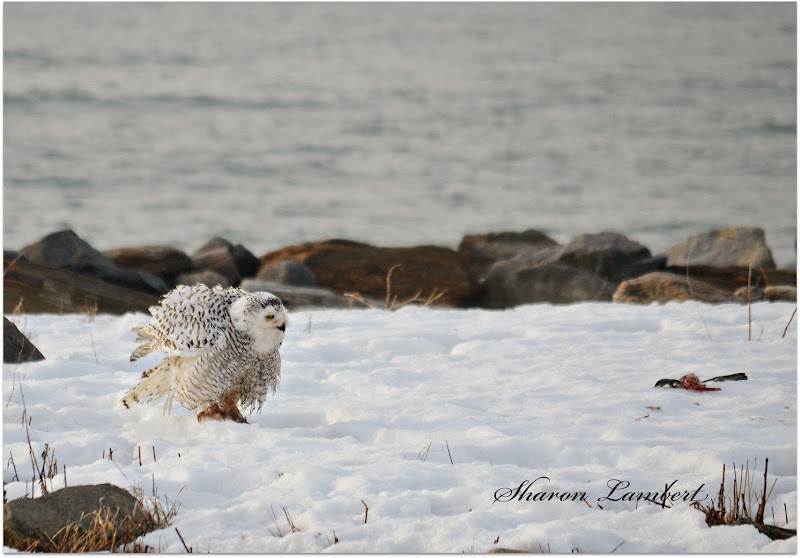 After shooting for a while then taking a few minutes in my car to warm up I decided to walk back over and see what she was up to. It was quite a sight to see, she was feasting on a bird she'd caught either earlier in the day or the night before. And though I shot some rather graphic images of her eating I felt it might be best to keep them out of this post.

It's not difficult to tell she has quite a bit of blood on her front feathers, around her beak and eyes. This is all good because it means she isn't going hungry. Something that was of concern for some of the snowy owls along the east coast. 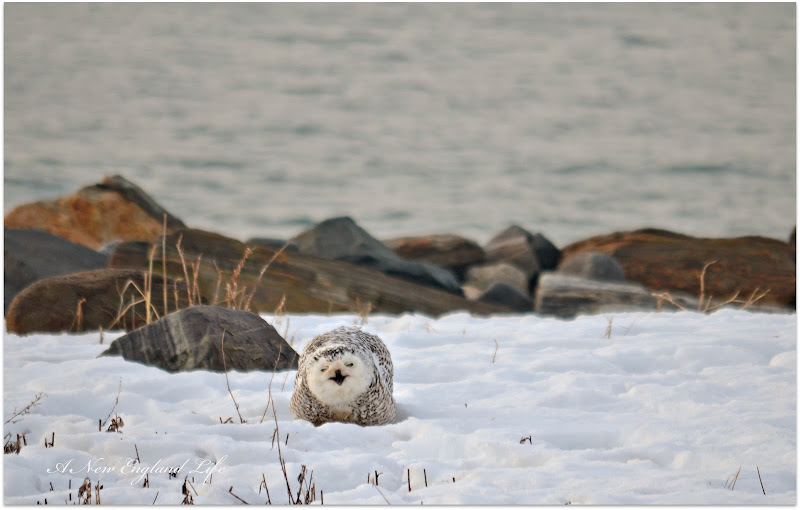 Once breakfast was consumed she started walking around and eating snow, which I didn't expect. A girl has got to get a drink somehow. 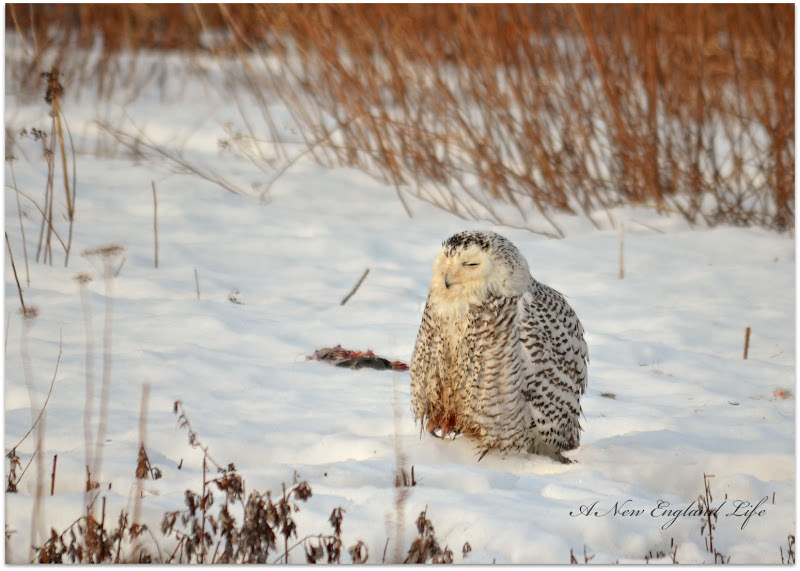 Finally, when the snowy was through pruning, snow eating, and scratching she decided to catch a little shut eye. All the while I looked on at how glorious she is, thinking how fleeting her time here will be. Any day could be her last before she heads back up north to Canada. 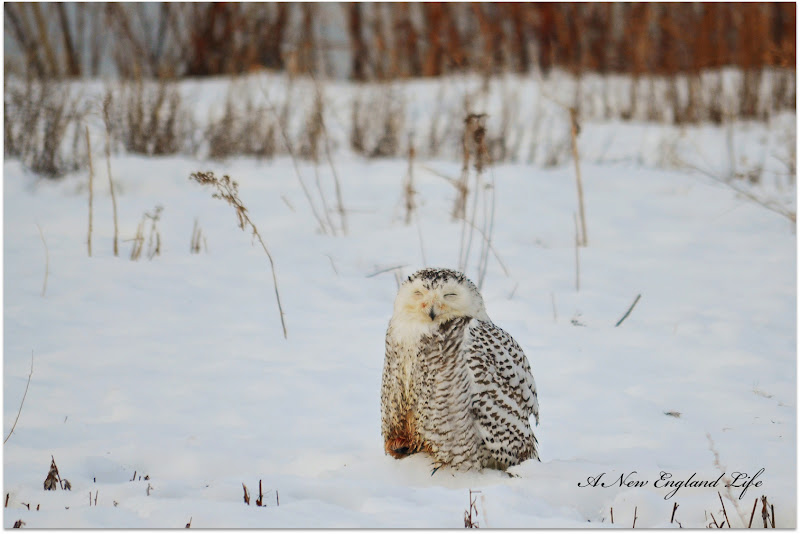 Thanks so much for sharing your photo shoot - enjoyed the pics. Yes, sad to see wild life consuming other wild life, but as hard as it is, we have to understand it is survival in the wild.
Hope you are doing well.

What beautiful photos! I have always wanted to visit New England...it's great to get glimpses into life there until I can visit.

The snowy owl is stunning. Thanks so much for sharing!
Becky

Thank you for sharing these photos! She is so beautiful!!

Sharon,I absolutely love your photographs--they are breathtaking! It's always such a pleasure to get your latest post in my emails. Keep up the tremendous work you do.

You have such lovely talents. I love when you share them with us. The photos are spectacular…ALL!!! Your prose keeps us in touch. Thank you for your gifts to us.

Your sunrise photos are breathtaking, Sharon. And the ones of the snowy owl are beautiful. I've never seen one before.

Sharon, thanks so much for sharing your photos. She is the same owl that I photographed at Rye Harbor. When I was there she did not move except to swivel her head now and then. She seemed to be loving the paparazzi. These are wonderful shots. Yes, she should be returning home soon. It was a thrill for me to see a snowy owl up close and in person. Have a great day.

Oh, I forgot. Your sunrise photos are gorgeous. You are so lucky to live near the ocean and get to see those. That day I saw the owl there was the most glorious sunset over the harbor.

What a beautiful sunrise, Sharon! You've captured it so well. Your snowy owl photos are just amazing! It seems she (?) likes posing for the cameras. :)

Oh my gawd! That owl is gorgeous. It's so unusual for one to be so comfortable around people. We have one that hangs out around here, but it flies away as soon as it spots a person. Love these photos. They look cold, but beautiful, all the same.

What glorious pictures you got of the snowy owl! Beautiful!

Such beautiful and atmospheric pictures! Here in the UK, we are beginning to shrug off what has been a dreadfully wet Winter and (dare I say it....) Spring seems to have arrived - time to get the camera out and hunt for atmospheric landscapes in the English countryside!

Thanks for sharing a bit of crisp, white snow - we've only had the soggy rain (and floods!) here.

SueH at The Knitting Assassin!
and I refuse to go quietly!

I envy you living so close to the water, and for having your own resident celebrity. Great photos!

Beautiful photos Sharon!!! I still say you live in the most beautiful area of the country. You seem to have everything you need with New England charm, history and a gorgeous ocean all so close. How I envy you.
Thanks for sharing your rare sight with us.
Cindy

Oh, wow, Sharon - fabulous photos! A girlfriend has been sending me some from a snowy owl that's taken up residence on the Cape as well. They certainly are plentiful. NY even came around to humanely trapping the snowy owls at their airport(s) just like they do here in Boston rather than shooting them as they've done in the past. You caught some amazing photos! And yes, my bluebirds are eating me out of house and home! Their favorite, of course, is the mealworms, with a close second being the suet (I get mealworm or insect suet). Of course if a robin or the starlings are around, there's a whole menagerie chowing down at one time! And I don't know where the warm weather is, but I hear it might make a brief appearance tomorrow! Can't wait! Take care... Donna

These are GORGEOUS shots, especially the snowy owl...what a thrill...I would be so excited I don't know if I could hold the camera still! Awesome!

I'm horrified by your bluebird story, Sharon! Dear God, I never thought the sparrows would do something like that. It sounds as thought the bluebirds had already nested in your box and the sparrows came in and tried to take it over? So even if I do kick out the sparrows, that could still happen if a bluebird moved in? I'd have a very hard time handling that. Horror movie stuff for sure. Thanks for letting me know!... Donna

I love owls so despite the bird remains and blood, I really love the owl pictures! That is so neat that you got to see and photograph it!

Amazing shots! I think your snowy owl is loving the attention.

Hi Sharon! This morning I've been blog hopping around, just looking at some of my friends and their friends blogs. I came across yours and a Lighthouse blog on your page, too! I also live in NH and was fortunate the past few winters to see the beautiful snowy white owls. Love your pictures! So glad I stopped by :)
Dawn
@ A Place for Pictures and Memories

Amazing photos. What a joy nature is.